Brilliant letter from Gauguin referring to Monet, Van Gogh, and Cezanne in relation to the price of art, of which he readily defends—"The small sketches that Van Gogh sold me at Goupil’s went for 60 francs average and the lowest prices for paintings were 300 r. But with Van Gogh, one didn’t mind it” 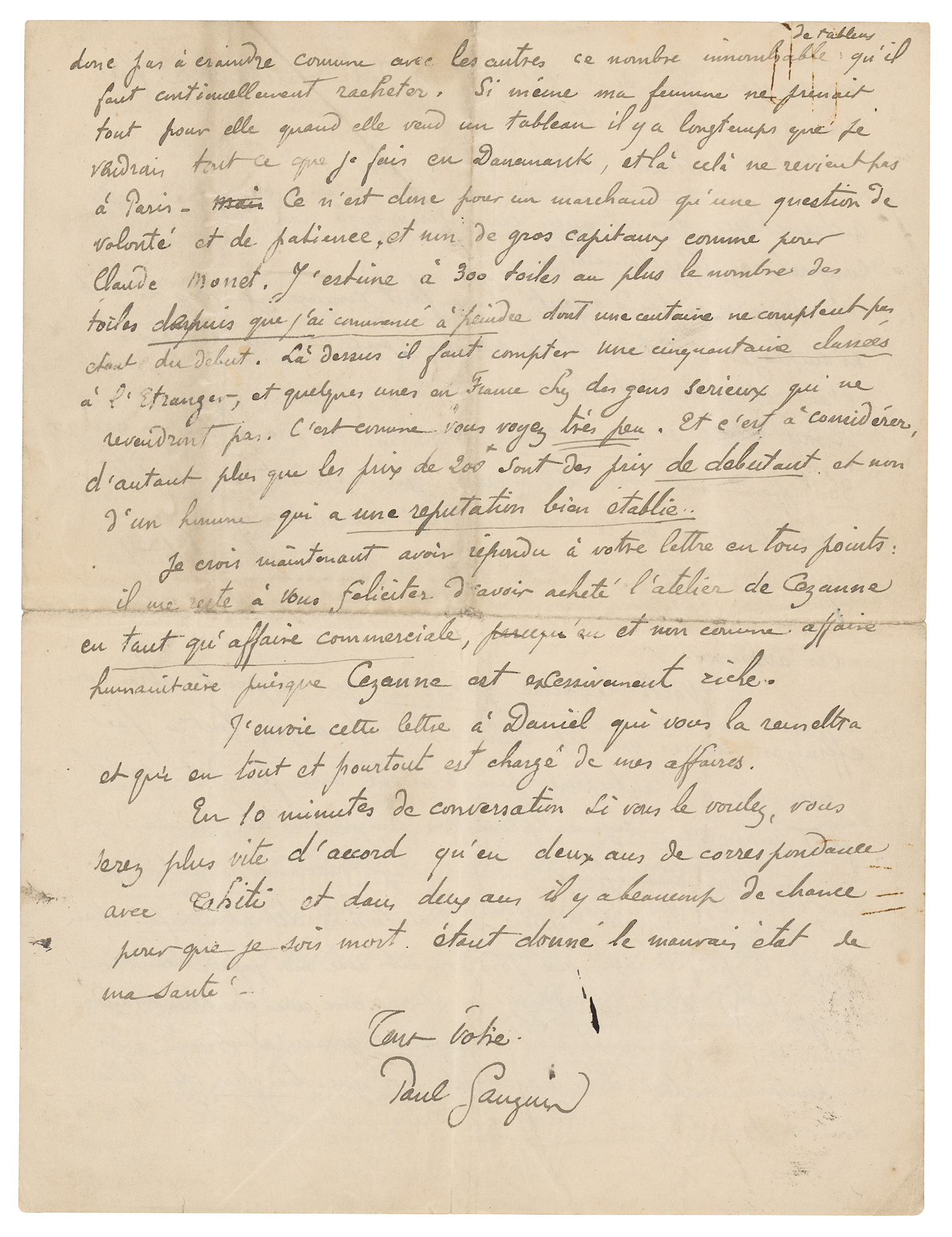 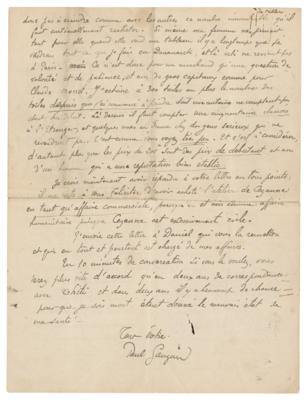 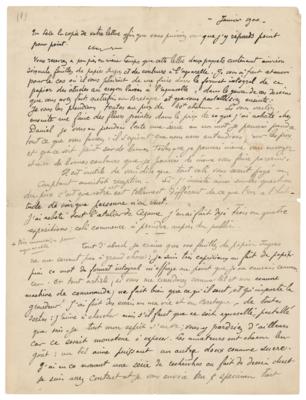 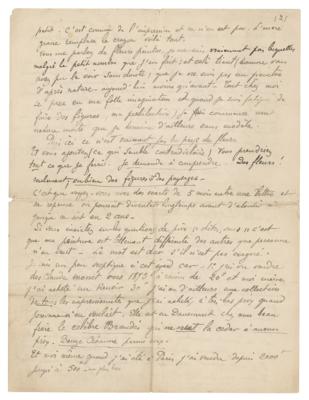 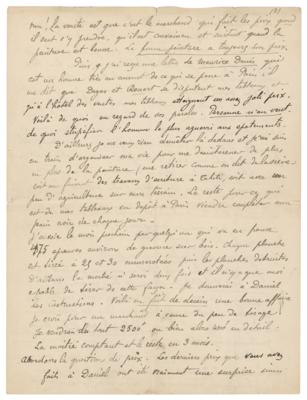 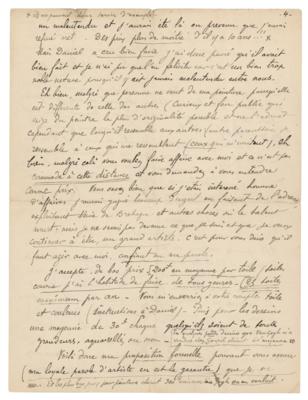 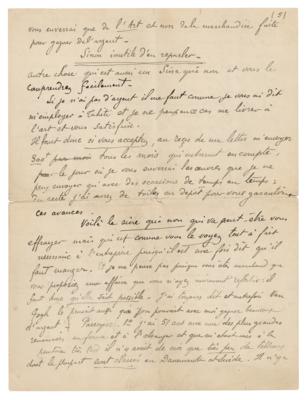 Brilliant letter from Gauguin referring to Monet, Van Gogh, and Cezanne in relation to the price of art, of which he readily defends—"The small sketches that Van Gogh sold me at Goupil’s went for 60 francs average and the lowest prices for paintings were 300 r. But with Van Gogh, one didn’t mind it”

ALS in French, six pages, 8 x 10.5, January 1900. Handwritten letter to the French editor, author, and art dealer, Ambrose Vollard, which begins with Gauguin quoting the text of Vollard’s letter to him so he may respond point by point (translated): “…You should be receiving two packages containing about 60 sheets of ‘Ingres paper’ and some watercolors. I’m sending you these in case you would like to do some studies in pencil, washed in watercolor for me, the full size of these sheets of paper. They should be of the same sort as you have done in the past in Brittany and which you have pastelled. I will pay you…40 fracs apiece. Then, if you wanted, you could do some painted flowers for me in the price range of those I bought at Daniel’s, and I would buy a whole series from you; in other words, I can take all you can make. We should come to an understanding on the price and also that these should be done on good canvas which I could even send you and with good colors I could obtain for you. It goes without saying that you will be paid for all this in cash as soon as I receive them. If I insist so much on talking about price, it is because your art is so different from that which one is used to seeing these days, that nobody wants it. I bought up the whole workshop of Cezanne, and I’ve already had three or four expositions; the public is beginning to like his work.”

Gauguin then commences his reply: “To begin with, I am very concerned that your sheets of ‘Ingres paper’ won’t do me much good—very bad for watercolors. Insofar as paper goes, I’m very capricious, and your talk of ‘full-size’ frightens me to the point of not being able to begin. In fact, every artist (if you consider me as such and not as a machine to be ordered about) only does well what he feels; the size (grandeur) matters little. I’ve made some attempts in my life and in Brittany, and they have been of all sorts: I like to explore, but if these have got to be pastellized watercolors, my spirit will not be in them. You would be the loser, too, because they would be monotonous in an exhibition. The art-lovers each have their separate tastes; one likes power, the other likes sugary sweetness. I have at this moment a series of experiments, sketches of which I am pretty pleased, and I am sending you a small specimen of them. It is like a print, and it isn’t one. Dark ink takes the place of pencil, that’s all. You speak about painted flowers, and I really can’t think of which one you mean in spite of the small number of them I have done, and that most likely because…I am not a naturalist painter—even less so today than before. All my work is created in my crazy imagination, and when I’m tired of painting faces, my predilection, I begin a still-life which I finish not using any model. And besides, this is not exactly flower country here. Then, you add (which seems contradictory) that you will take all I can make. I seek to understand…only flowers?…Or faces and landscapes? It’s just that with periods of 5 months between letter and answer one could take a long time before resulting in anything at all in two years. If you insist so much on talking about price…it is because my paintings are so different from any others’ that nobody wants them. That’s a bit strong, if not exaggerated. I am bit skeptic on this point, because…I saw some Monets sell for around 20 fr. in 1895, and I bought a Renoir for 30. Moreover, I have a collection of all the Impressionists which I bought at low prices when nobody wanted them. It is in Denmark with my brother-in-law…who won’t give it up at any price. 12 Cezannes among them. And myself, when I’ve been in Paris, I've sold from between 2000 to 500 francs at the lowest. The truth is that it is the merchant who sets the price when he knows how to go about it, that he is convinced, and above all when the painting is a good one. The good painting always has its price.”

The artist continues: “Also, I got a letter from Maurice Denis who is someone who is very much in the know about what is happening in Paris: he tells me that Degas and Rouart argue over my paintings, and in the salesrooms, they are going for a pretty nice price. So much for your words ‘Nobody wants them!’ So much to stupify the man who is the most hardened to stupefaction. In any case, I don’t want to get mixed up in it, and I am in the midst of organizing my life so that I can become more and more disinterested in painting (to retire from the scene, as they say) either by working or writing in Tahiti, or by cultivating a little of my land. Whatever remains of my paintings in Paris will give me my daily bread. Next month, I am sending about 475 proofs of woodcuts with someone who is going to France. Twenty or thirty numbered prints have been drawn from each block and then the blocks were destroyed. Anyway, half of them had been used twice, and I am the only one capable of printing this way…

“As far as sketches are concerned, here is a good deal. I think that because of the limited number of prints, I would sell the whole series at 2500 fr. apiece, or 4000 fr. apiece separately…Half of the price to be paid in cash on receipt and the remainder in 3 months…The most recent prices you quoted…were really a surprise if not a misunderstanding, and, had I been there, or at least notified, I would have refused outright. Prices more than half of what they had been 10 years ago!!! Thus, they cannot be used as a reference…In spite of the fact that nobody wants my art because it is different from other people’s (strange and crazy public which demands the highest degree of originality of a painter and yet doesn’t admit it when he resembles others) parenthetically, I resemble others who resemble me (who imitate me)—well, in spite of all that you wish to do business with me, that not being easy at this distance, and you ask to reach an understanding on price. You know well that were I interested in being a businessman, I would have earned much money by being shrewd, by exploiting…Neine of Brittany and other matters in which talent dies; but I would not have become what I am, and wish to continue to be, a famous artist. I am saying all this to you to tell you that you must deal with me and believe what I say. I accept low prices (200 fr. average per canvas—of the kind which I am accustomed to paint—of all sorts—(25 maximum per year). You shall send me, at your expense, canvas and colors…For sketches an average of 30 fr. each, no matter what size, watercolors or not—(The small sketches that Van Gogh sold me at Goupil’s went for 60 francs average) and the lowest prices for paintings were 300 r. But with Van Gogh, one didn’t mind it. There is my formal proposition enabling to assure you (and word as an artist is the guarantee) that I will send you art and only art, not merchandise fabricated to earn money. If you can’t accept this condition, we may as well consider the subject closed.

“Another condition which is also a sine qua non, and which you will easily understand. If I have no money, I will have to do as I told you—make a living in Tahiti, and so will not be able to get involved with art and satisfy you. If you accept these conditions, you must, upon returning this letter, send me 300 francs per month, which will count towards payment on the day I send you the works which I can only send as the occasion arises from time to time: as for the remainder, I have enough paintings in storage to guarantee you these advances. Here is the sine qua non which may scare you off, but which is, as you can see, absolutely necessary to this enterprise, because as has been said, one must eat. As you are a merchant, I doubt that you would propose any business without having carefully thought it out: thus my conviction that this proposition must be possible—I always used to say, and Van Gogh has thought, that with me, one could make a lot of money. Because…I am 51 years old and have one of the greatest reputations in France and overseas, and having started painting rather late, there are only very few of my paintings of which the majority are distributed between Denmark and Sweden. You don’t have to fear, as with other artists, that there is a vast number of paintings which circulate continually for re-sale. If even my wife had my best interests at heart when she sold a painting, it would be a long time before I would sell what I did in Denmark, and even then, those wouldn’t come back to Paris. So, as far as a merchant is concerned, it is only a question of desire and patience, not of an enormous capital as it is for Claude Monet. I estimate that I have produced 300 canvasses, maximum, since I started to paint, and approximately 100 of those don’t count from the beginning. After that, you have to count around 50 distributed overseas, and several in France among serious people who will not re-sell. As you can see, there are very few. And considering, moreover, that 200 fr. is a beginner’s price, and not that of a man with an established reputation.

“…It remains for me to congratulate you on your purchase of Cezanne’s studio as a business affair rather than as an act of humanitarianism since Cezanne is extremely rich…After talking for ten minutes, if you wish, you will be more agreeable to my proposals than after two years of correspondence with Tahiti, and in two years there is a strong possibility that I would be dead, given the bad state of my health.” In fine condition, with some splitting to the ends of the folds.