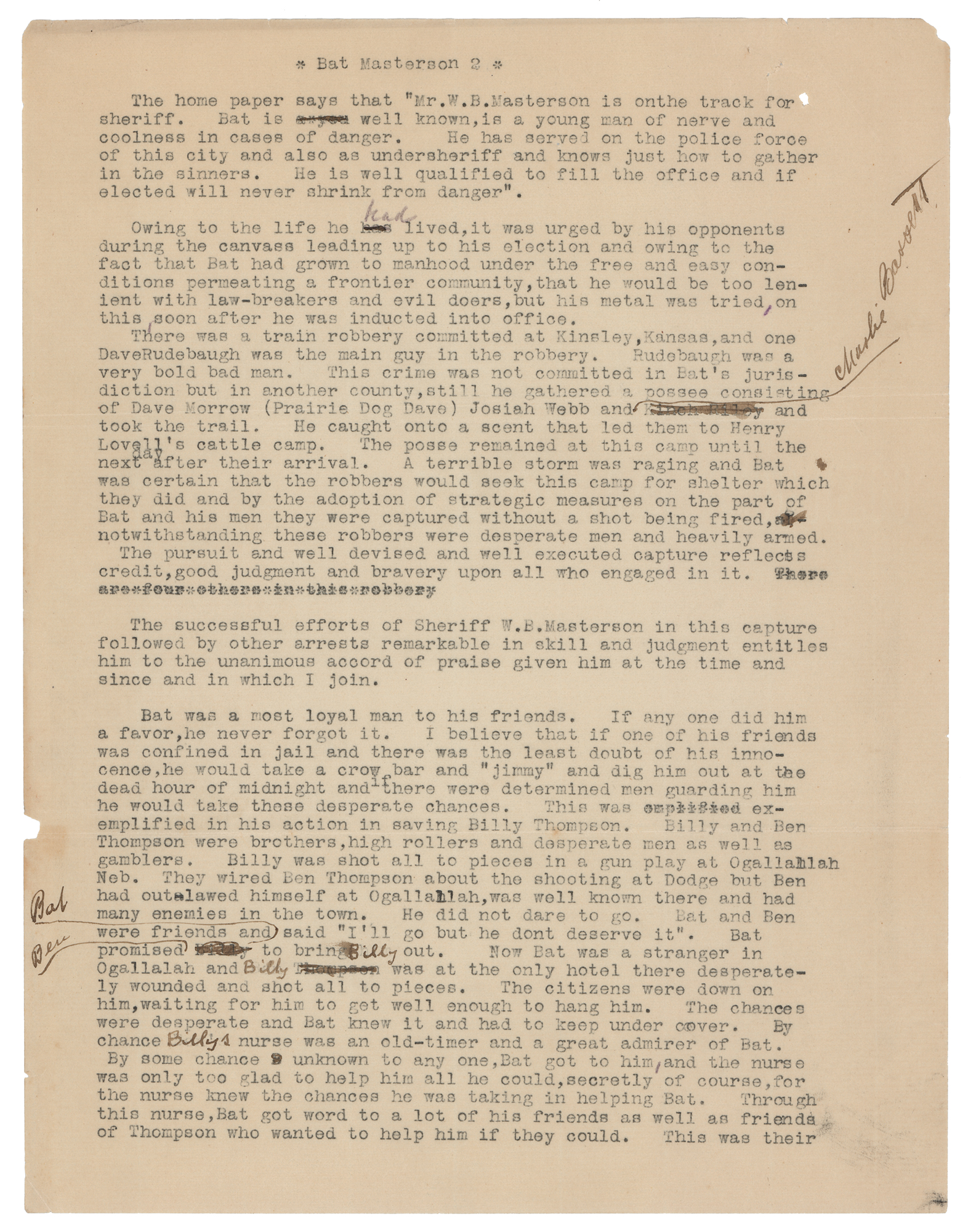 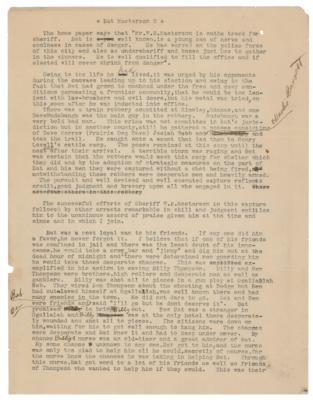 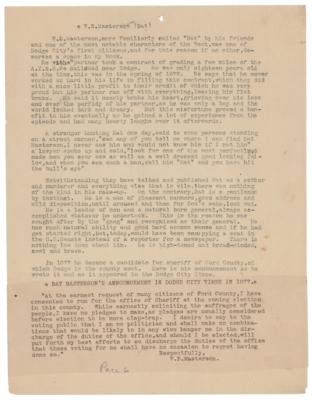 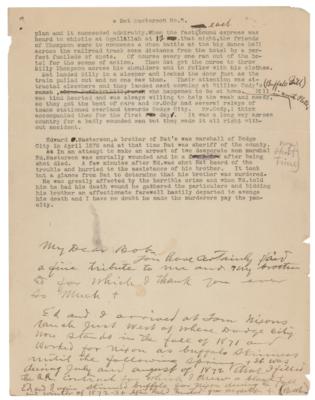 Previous Lot
Next Lot
Login or Register To Bid Add to BidTracker
Estimate: $35000+

ALS signed "Bat," written at the conclusion of a three-page typed biography of Masterson by Robert M. Wright, 8.5 x 11, no date but circa 1912. Wright intended to use the glowing bio—presenting incredible incidents from Masterson's career as a lawman, including the midnight rescue of an innocent man whisked away to 'Buffalo Bill' Cody's ranch, and the murder of Masterson's brother Ed in 1878—in his upcoming book, Dodge City, the Cowboy Capital. Wright concludes the biography with, "He [Bat] was greatly affected by the horrible crime and when Ed told him he had his death wound he gathered the particulars and bidding his brother an affectionate farewell hastily departed to avenge his death and I have no doubt he made the murderers pay the penalty." Masterson has made several corrections to the biography in his hand, including crossing out the name of Kinch Riley on page two, adding his name "Bat" into a text of conversation, writing "Charlie Bassett," and adding "(Buffalo Bill)" next to William Cody's name.

At the bottom of the third page, Masterson writes a letter to Wright: "My Dear Bob, You have certainly paid a fine tribute to me and my brother Ed for which I thank you ever so much. Ed and I arrived at Tom Nixon's ranch just west of where Dodge City now stands in the fall of 1871 and worked for Nixon as buffalo skinners until the following spring. It was during July and August of 1872 that I filled the R. R. contract for which I drew a blank & Ed and I again skinned buffalo for Nixon during the fall and winter of 1872-3. After that I hunted for myself. (Bat)." In fine condition, with small holes to the top edges, minor edge chipping, and a couple of light stains to the last page.

After an impressive climb to success—venturing west at age 16, rising from freight wagon driver to owner of the largest commercial empire in the area—prominent Dodge City resident Robert M. Wright hit financial difficulties in his final years. Battling morphine addiction and struggling to support his family, he wrote his history of Dodge City in hopes of making some money. Sending this draft account of Masterson's exploits as the city's most famous lawman to his longtime associate for review, he received significant help; Masterson's review resulted in several significant corrections. In the passage describing the organization of his posse to hunt down train robber Dave Rudebaugh, for example, Masterson corrects the record by crossing out out the name Kinch Riley and substituting fellow lawman and saloonkeeper Charlie Bassett. He also corrects the date of his initial run for Ford County Sheriff. A remarkable account of the legendary lawman's most famous years by a fellow Dodge City pioneer, corrected in Masterson's own hand.