Handwritten letter by Christy Mathewson on his recruiting efforts for a 1910 all-star barnstorming tour: "Roger Bresnahan assures me that he will go, but does not wish to put himself upon record in ink" 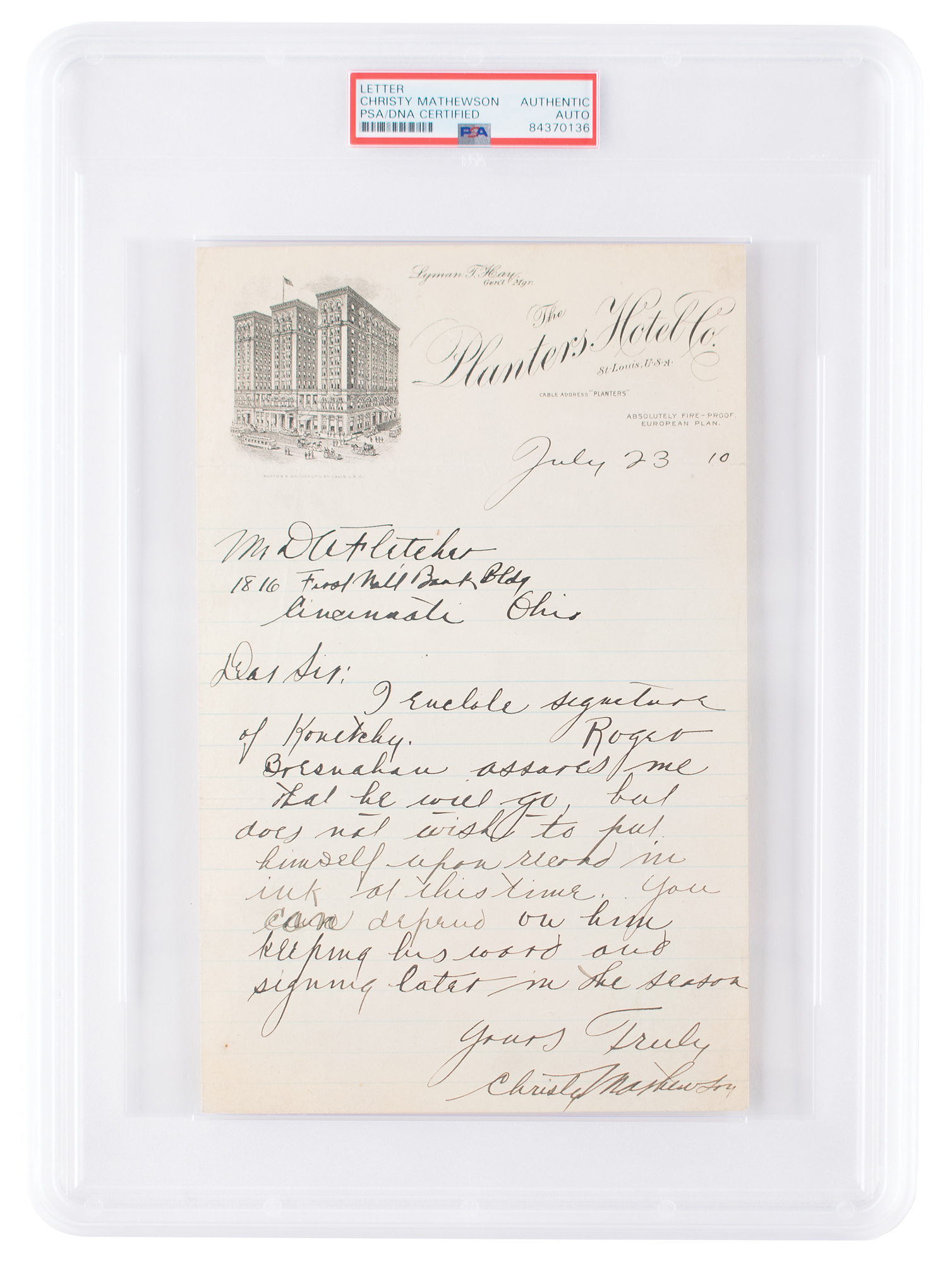 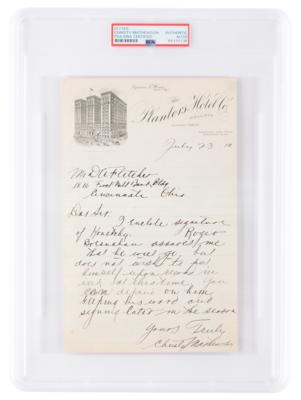 Handwritten letter by Christy Mathewson on his recruiting efforts for a 1910 all-star barnstorming tour: "Roger Bresnahan assures me that he will go, but does not wish to put himself upon record in ink"

Excessively rare ALS, one page, 6 x 9.5, The Planters Hotel Co., St. Louis, letterhead, July 23, 1910. Handwritten letter promoter D. A. Fletcher, regarding a proposed post-season barnstorming tour of baseball's all-stars. In full: "I enclose signature of Konetchy. Roger Bresnahan assures me that he will go, but does not wish to put himself upon record in ink at this time. You can depend on him keeping his word and signing later in the season." In fine condition, with slight splitting to the ends of the mailing folds. Encapsulated in a PSA/DNA authentication holder.

During the summer of 1910, Cincinnati promoter Daniel A. Fletcher worked hard to organize an 'All-Star Series' that fall, signing many of baseball's biggest stars for the occasion—Christy Mathewson, Walter Johnson, Ty Cobb, and Nap Lajoie were among those scheduled to participate. Here, Mathewson was evidently working as an ambassador for Fletcher as his New York Giants were in St. Louis for a four-game series against the Cardinals. Christy had his sights set on two of the opposing team's stars: first baseman Ed Konetchy and catcher-manager Roger Bresnahan.

It seems that July 23rd was an especially productive day for Mathewson—he started for the Giants, surrendering just two runs over nine innings to earn his 17th win of the season. On top of that, he signed Konetchy to a contract for Fletcher, and received assurances of Bresnahan's participation.

Organized baseball took notice as Fletcher's project gained momentum, and—citing concerns over potential injuries and fearing that the high caliber of play would tarnish the glamor of the World Series—banned stadiums from hosting Fletcher's games. Additionally, baseball's National Commission threatened to ban any player that participated in Fletcher's series from participating in the World Series. In the end, Fletcher's 'All-Star Series' would not come to fruition, and players were asked to return any advance payments they received.

Christy Mathewson's autograph is extremely rare in any form, and the remarkable content of this handwritten letter makes it that much more desirable.