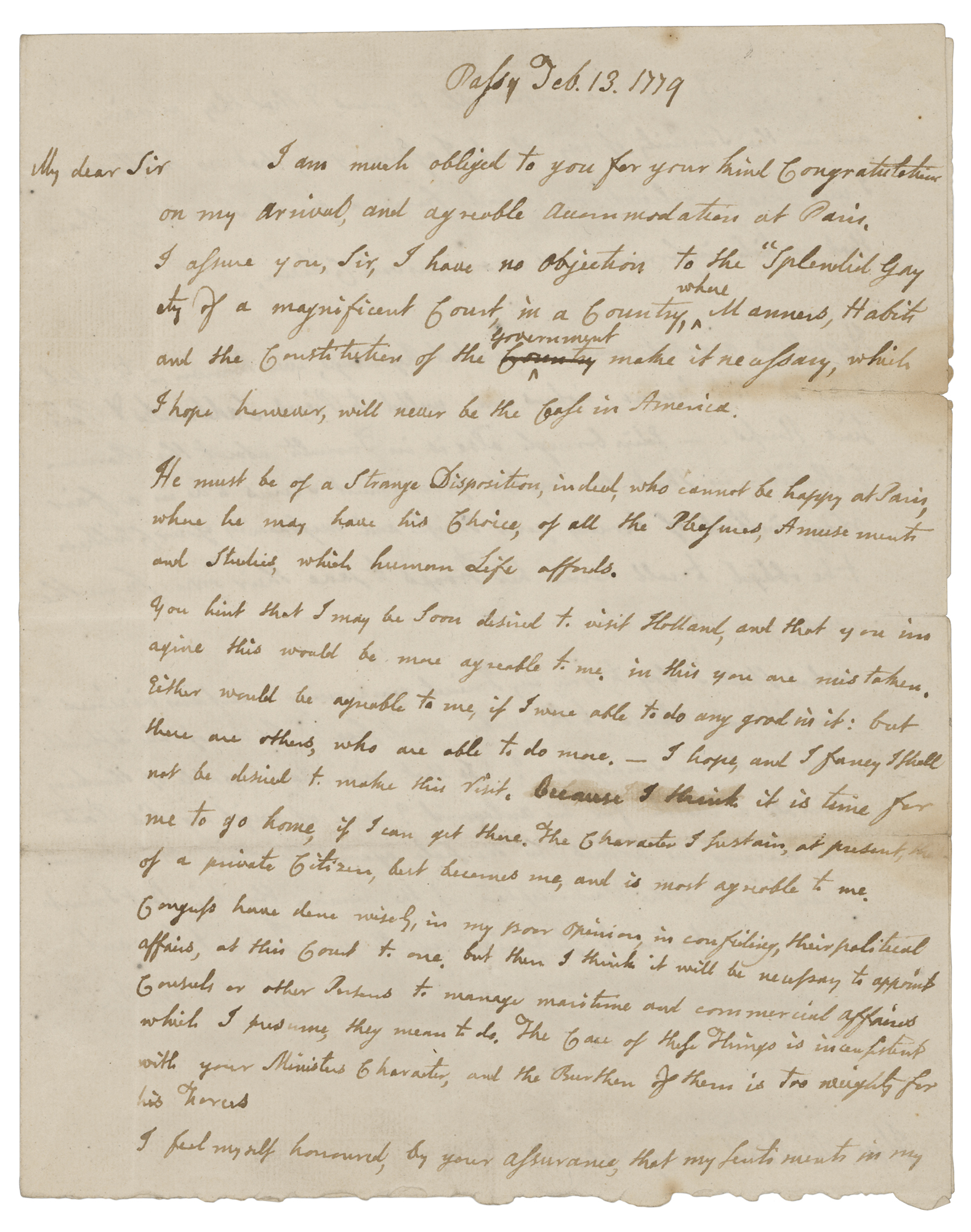 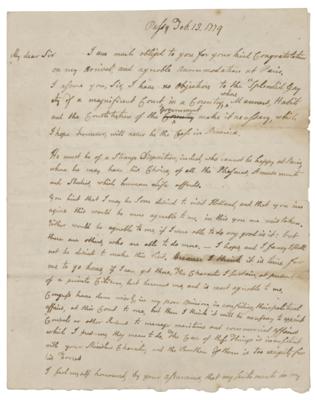 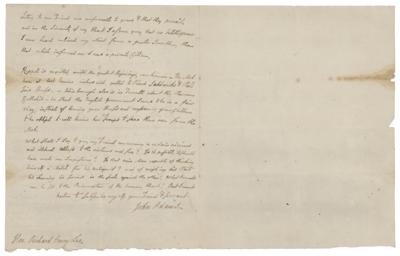 Revolutionary War-dated ALS, one page both sides, 7.25 x 9.25, February 13, 1779. Letter to Richard Henry Lee, written while in Paris as commissioner to France, regarding life at court in Paris and his future plans. In full: "I am much obliged to you for your kind Congratulations on my arrival, and agreeable accommodation at Paris. I assure you, Sir, I have no objection to the 'Splendid Gayety of a magnificent Court' in a Country where Manners, Habits and the Constitution of the Government make it necessary, which I hope however will never be the case in America.

He must be of a Strange Disposition, indeed, who cannot be happy at Paris, where he may have his Choice, of all the Pleasures, Amusements and Studies, which human Life affords.

You hint that I may be Soon desired to visit Holland, and that you imagine this would be more agreeable to me, in this you are mistaken. Either would be agreeable to me, if I were able to do any good in it: but there are others, who are able to do more. I hope, and I fancy I shall not be desired to make this Visit, because I think it is time for me to go home, if I can get there. The Character I sustain, at present, that of a private Citizen, best becomes me, and is most agreeable to me.

Congress have done wisely, in my poor opinions, in confiding, their political affairs, at this Court to me, but then I think it will be necessary to appoint Consuls or other Persons to manage maritime and commercial affairs which I presume, they mean to do. The Care of these Things is inconsistent with your Minister's Character, and the Burthen of them is too weighty for his Forces.

I feel myself honoured, by your assurance, that my Sentiments in my Letter to our Friend are conformable to yours, & that they prevail, and in the Sincerity of my Heart I assure you, that no Intelligence I ever heard relieved my Mind from a greater Burthen, than that which informed I was a private Citizen.

Keppell is acquitted, amidst the great Rejoicings, ever known—The Mob have at last become violent and pulled to Pieces Sandwich's and Palisser's Houses—Edinborough also is in Tumult about the Roman Catholics—in short the English Government seems to be in a fair Way, instead of burning your Houses and massacring your Children to be obliged to call home her Troops to save their own from the Mob.

What shall I say to you, my Friend concerning a certain and illiberal Address to the virtuous and free? Is it possible it should have made an Impression? Is that vain Man capable of thinking himself a Match for his antagonist? And of weighing his Parts his Learning his services in the scale against the other? What Bounds can be set to the Presumption of the human Heart?" In fine condition, with some light staining, and slight splitting along folds. Provenance: Christie's, 2012; The Everett Fisher Collection.

Adams arrived in France in the spring of 1778 to join Ben Franklin and Arthur Lee—the brother of the recipient of this letter-as part of the commission to negotiate an alliance with the nation. By the time he arrived, however, the mission was already accomplished. Franklin had become one of the most famous men in France, and Adams disdained his frivolous lifestyle filled with social engagements. Adams's experience was further hindered as he did not know French, making it impossible to communicate with the country's diplomats. Acknowledging his shortcomings, Adams returned home in June of 1779. In the years that followed he proved himself a more able diplomat, eventually achieving successful negotiations with France, Holland, Prussia, and, after the Revolution, resorting ties with Great Britain. Rare in this format, this is a remarkable letter with Adams revealing his distaste for the position he found himself in.