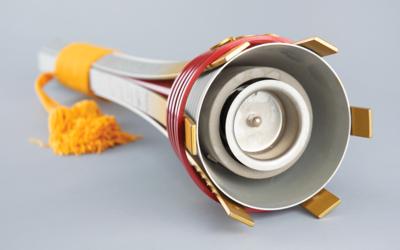 Official 1998 Nagano Winter Olympics torch, comprised of aluminum and cotton, measuring 21.5″ in length and 4.75″ at its widest point. Manufactured by the Katsura Co., and designed by the Nagano Olympic Games Organizing Committee, the torch was inspired by pine branch torches called taimatsu that were used in the past in Japan. The hexagonal shape of the body represents snow crystals, with the silver color chosen to resemble a wintry landscape; when turned upside-down, the torch gives the resemblance of a Bonsho bell found in Buddhist temples. The six silver-colored vertical bands are adorned with raised pictograms of fifteen sporting events, as well as the Nagano Games logo and text in both English and French, “The XVIII Olympic Winter Games, Nagano 1998.” The five red rings mounted to the top bear gold-colored Olympic rings, and the yellow rope wrapped to the lower handle is a reference to a traditional element of Japanese design. Exhibits a few scuffs and scratches to the body.

The Olympic flame arrived in Tokyo on December 23, 1997, and was soon split into three flames at a ceremony in the Yoyogi Athletic Park on January 4, 1998. They were taken by plane to three destinations—the Eastern Japan route (Hokkaido), the Pacific Ocean route (Kagoshima), and the Sea of Japan route (Okinawa)—and, upon entering Nagano Prefecture from the north, south, and east, the flames were reunited in Central Square on February 6th. The relay lasted a total of 51 days, traveled over 3,400 km, and featured over 6,900 torchbearers. The Games themselves were highly successful, and witnessed the introduction of women's ice hockey, curling, and snowboarding. Additionally, National Hockey League players were allowed to participate in the men's ice hockey event. A scarce and brilliant Olympic torch that gracefully blends Japanese tradition with a modern touch.