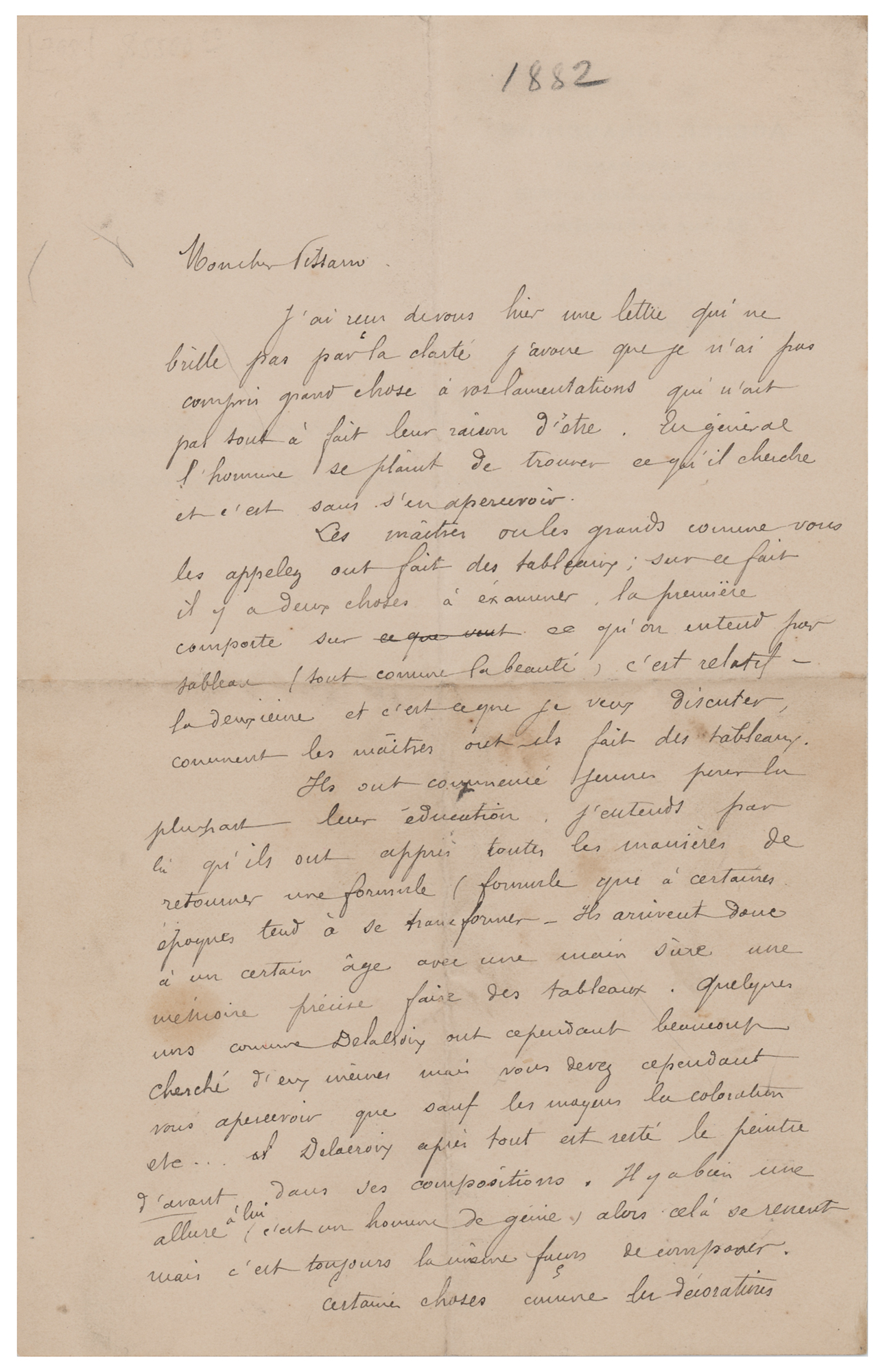 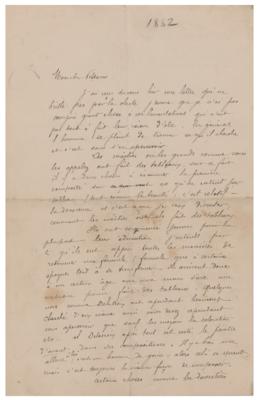 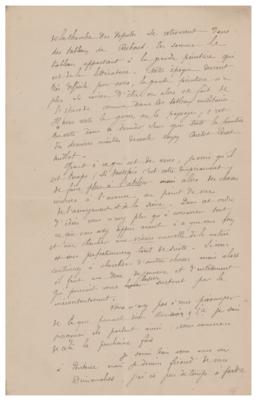 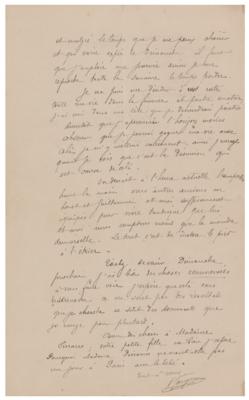 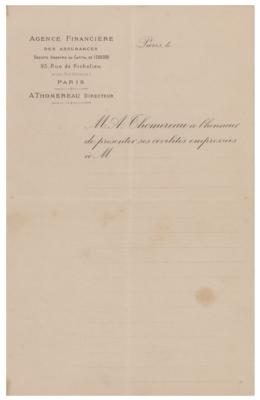 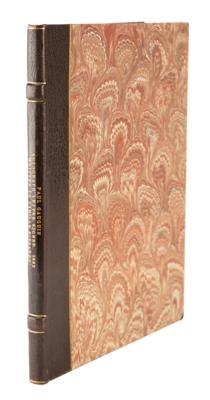 Important ALS in French, signed “P. Gauguin,” three pages on two sheets, 5.25 x 8.25, no date but likely circa May-June 1882. Fascinating handwritten letter to his friend and mentor Camille Pissarro, commenting on many fellow painters and discussing his own future as an artist. In part (translated): "The masters or the greats, as you call them, painted pictures; in that statement there are two things to be examined: the first depends on what one understands by picture (exactly like beauty) it is relative—the second, and what I want to discuss, is how did the masters do their pictures.

They began their education young for the most part. I mean by that that they learned all the ways of returning to a formula (a formula which at certain periods tends to transform itself)—they thus reach a certain age with a sure hand [and] a precise memory [ready] to make pictures. Some, like Delacroix, searched a lot for themselves, but you should be aware nonetheless that, apart from methods, color, etc… Delacroix after all remained the painter as before [i.e. in the grand tradition] of his compositions. He undoubtedly has a certain style of his own (he is a man of genius) which makes itself felt, but there remains always the same manner of composing.

Certain things, like the decorations for the Chambre de Députés, can be found in the paintings of Rubens [Here, Gauguin may be referring to Delacroix's commission to paint the Salon du Roi in the Chambre des Députés at the Palais Bourbon in Paris between 1833-1837.] In sum, the picture belongs to painting in the grand manner, which is also of literature. Our era becomes very difficult for us: painting in the grand manner no longer has a reason to exist, or else it becomes episodic, as in battle paintings. There remains for us genre or landscape—and indeed it is in this latter direction that all the painting of the last masters has been moving—look at Courbet, Corot, Millet—

As for what concerns you, I believe it is time (if it accords with your temperament) to do more in the studio, but with ideas matured in advance from the point of view of the composition and of the subject. In this way of thinking, you have only to devote all you have learned before to what you will do, and not to look for a new vision of nature, and you will improve at once. Otherwise, continue to look for other things; but in that case you will need a dose of youth and determination which might weary you, particularly through dissatisfaction. Do not worry about what Renoir & Co. may say. I know why they talk like that (we will chat about it next time).

I would do well to see you at Pontoise, but I become jealous of my Sundays. I have so little time to lose… I must use my day, otherwise I will reproach myself during the week for the lost time.

I can't decide whether to remain all my life in finance and as an amateur painter. I have got it into my head that I would become a painter. As soon as I can discern a less obscured horizon, and that I shall be able to earn my living by it, I will put it into effect straight away…

One should do that at the current hour, hands down. You other old ones and Guillaumin and me [are] sufficiently equipped to live while he and me, we count less than the least damsel. Above all, we must put one foot in the stirrup

Try to come next Sunday. I have many things which I've started to show you. I hope that it will interest you… Good wishes to Madame Pissarro; your little daughter is well, I hope. Why doesn't Madame Pissarro come one day to Paris with the baby." In fine condition, with some light stains to the first page. Accompanied by a custom-made quarter-leather clamshell case.

In this phenomenal letter, Gauguin questions fundamental ideas about art, artists, and artistic methodology. He extensively discusses meta concepts, such as what makes "masters" great, the ideal artist's education, and the state of the late-nineteenth-century art world—which he judged to be a particularly "difficult era" for artists like himself. In this discussion he refers to seven famous artists, including seventeenth-century Dutch Old Master Peter Paul Rubens; influential French Romantic and Realist painters Jean-Baptiste-Camille Corot, Eugene Delacroix, Jean-François Millet, and Gustave Courbet; and Pierre-Auguste Renoir and Armand Guillaumin, Gauguin and Pissarro's own contemporaries.

Gauguin argues that painting can be separated into two schools: that of "les maîtres ou les grands" ("the masters or greats [artists]"), and that of modern artists like Pissarro and himself. Artwork from one or two generations earlier, such as that produced by Eugène Delacroix, is firmly situated in the "grand tradition" of academic painting: highly wrought and emotive paintings, often monumental in scale, depicting allegorical figures, mythological scenes, or historical events. Art critics maintained that such artwork appealed to higher realms of thinking, and thus enriched the viewer. It was considered canon.

The Impressionists and Post-Impressionists, on the other hand, rejected such codified themes and tropes. These artists depicted ordinary landscapes, people, and objects, to the horror of the general public and the art world. This meant that the best living artists of Gauguin's generation could be—and often were—rejected from the Salon and relegated to the Salon des Refusés.

Gauguin's probe into the "grand tradition" of painting also begs the question of what makes art objectively great. To Gauguin--though he would first admit the question as relative--he might argue that the best art is great because of the artists' technical brilliance or "genius" as opposed to other conventional criteria. The stuffy pronouncements of art critics of the day might examine the following aspects, for example: Is its subject matter socially respectable? Is its style traditional or modern? This of course was anathema to the Impressionist raison d'être: to convey the spirit of the art.

Gauguin also mentions the famous Sunday painting sessions which he regularly enjoyed in Camille Pissarro's garden at Pontoise, northwest of Paris. Pissarro, who was slightly older than the other leading Impressionists and Post-Impressionists, had established an artists' collective group in 1873. Pissarro served as a role model to many rising artists including Paul Gauguin, Vincent Van Gogh, Paul Cézanne, and Georges Seurat.

Considering Pissarro's avuncular role, then, it is a little unexpected that Gauguin offers painting advice to his mentor in the letter. Pissarro preferred to paint en plein air in one feverish sitting, prioritizing his first "impression" of the scene as the best. Surprisingly, Gauguin counsels Pissarro to do less work in the field and more in the studio. By preparing beforehand, Pissarro "would not have to search for a new vision of nature" every time he painted, liberating him, and allowing him to "improve at once." Gauguin's advice is essentially anti-Impressionist, as the Impressionists wanted to spontaneously and simultaneously paint the essence of what they saw, in the real environment. Gauguin thought differently. This perhaps anticipates his shift towards Post-Impressionism, and his later embrace of more stylized artwork.