Tolstoy cites Dickens, Hugo, and Dostoevsky in his study of "the universal art" 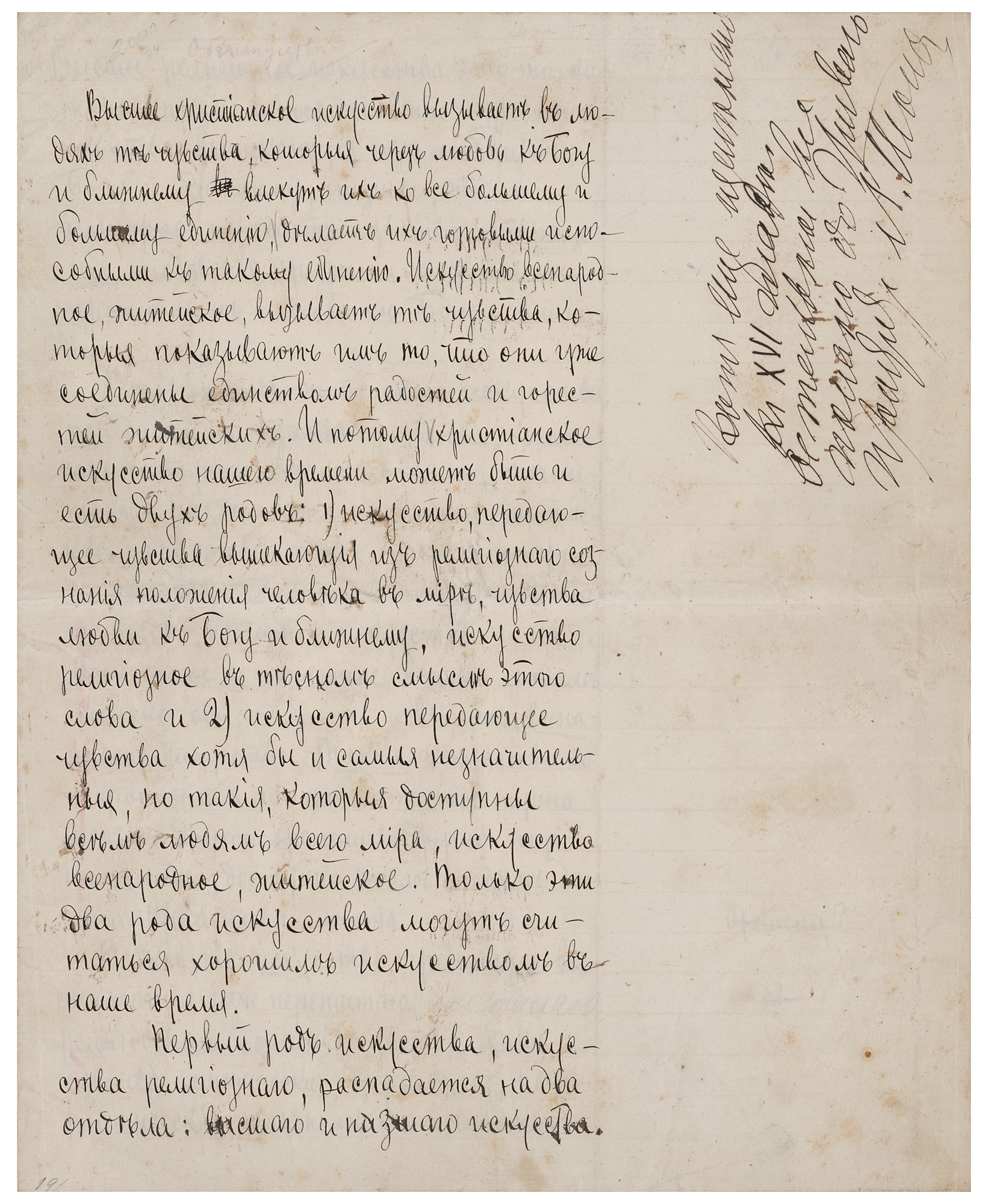 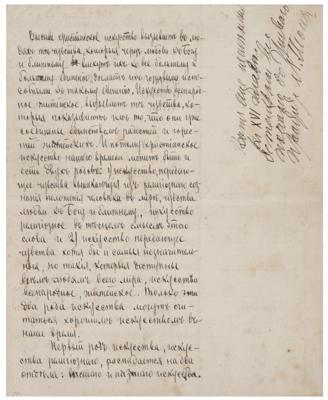 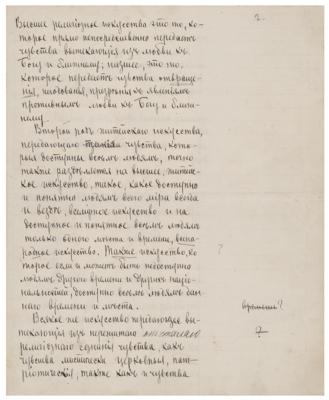 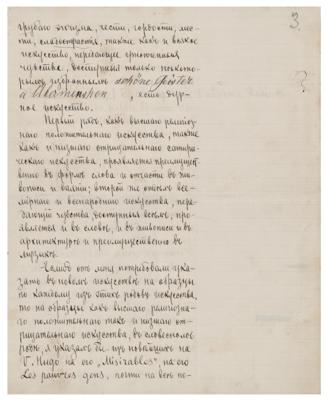 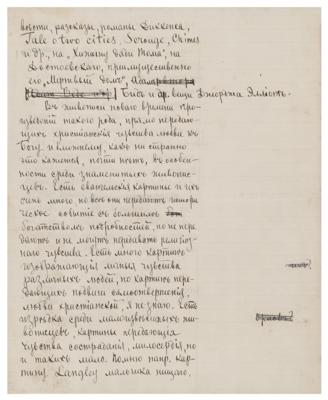 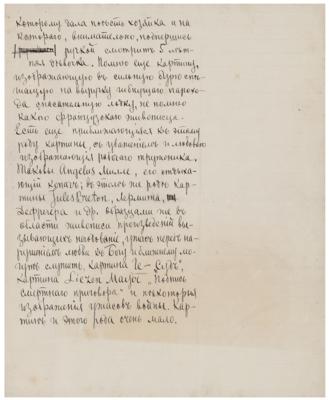 Tolstoy cites Dickens, Hugo, and Dostoevsky in his study of "the universal art"

Manuscript draft in Cyrillic for a portion of the fifteenth chapter of Leo Tolstoy's 1897 essay 'What Is Art?,' five pages, 8.75 x 10.5, endorsed vertically in the margin of the first page, "Here are more changes in chapter XVI. All the rest was sent with [illegible], L. Tolstoy." The text of the draft is predominately penned in another hand, with the addition of a couple words by Tolstoy.

In full: "The highest Christian art summons in people those feelings which, through love of God and one’s neighbor, draw them towards greater and greater union, which make them ready for and capable of such union. The art of the whole people, everyday art summons the feelings which show them that they are already united in the oneness of life’s joys and sorrows. And therefore Christian art in our time can be and is of two kinds: (1) art, which conveys feelings coming from a religious consciousness of a person’s position in the world with regard to God and to his neighbor, that is art in the narrow sense of the word, and (2) art, which conveys feelings, even the most insignificant ones, but such as are accessible to everyone in the world, that is art which is of the whole people, everyday art. Only these two kinds of art can be considered good art in our time.

The first kind of art, the religious art, can be divided into two parts: higher and lower art. The higher religious art is that which directly conveys feelings arising from the love of God and one's neighbor; the lower art is that which conveys feelings of repulsion, indignation, contempt for the manifestations which is opposite to the love of God and one’s neighbor.

However, any art which conveys feelings arising from the experienced obsolete religious consciousness, such as mystically ecclesiastical, patriotic feelings, as well as feelings of coarse egoism, revenge, voluptuousness, as well as any art that conveys refined feelings accessible only to a select few schöne Geister and Ubermenshen [sic], is bad art.

The first kind, both the higher religious positive art, as well as the lower negative satirical art, manifests itself mainly in verbal form and partly in painting and sculpture; whereas the second kind, the universal art, the art of the whole people, conveying feelings accessible to everyone, manifests itself in words, painting, architecture, and mainly in music.

If I were asked to point to examples of each of these kinds of art in modern art, then, as examples of the higher religious positive art and lower negative art in the written word I would point among more recent works to V. Hugo and his Misirables [sic], his Les pauvres gens, to almost all of the novellas, stories, and novels of Dickens: [A] Tale o[f] Two Cities, Scrouge [sic], [The] Chimes and others, to Uncle Tom’s Cabin; to Dostoevsky, most of all to his Dead House; to Adam [author] [Adam Vede and others] Bede and other works by George Eliot.

Among paintings of modern times, strange as it seems, there are almost no works of the kind that directly convey the Christian feelings of love of God and one’s neighbor, especially among famous painters. There are Gospel paintings, very many of them, all representing historical events with a great wealth of detail, yet they do not and cannot convey religious. There are many paintings that portray the personal feelings of various people, but I am not aware of any paintings that portray deeds of self-denial and Christian love. There are occasionally among the little-known painters [Orlov?] paintings that convey feelings of compassion, mercy, but even these are few. I do recall, for instance, a painting by Langley, depicting a beggar boy who is given food by a woman and who is being attentively watched by a five-year-old girl, her head propped in her hand. I also recall a painting depicting a lifeboat hastening in a bad storm to help a foundering steamer, but I do not remember by which French painter. There are also paintings that approach this kind, portraying the laboring man with respect and love. Such is the Angelus by Millet, his resting harvester; to this same kind belong paintings by Jules Breton, Lhermitte, Defregger and others. As examples of paintings that call up indignation and horror at the violation of the love of God and one’s neighbor, are Ge’s Judgment, Liezen-Mayer’s Signing the Death Sentence and several depictions of the horrors of war. Paintings of this kind are also very few." In fine condition, with scattered light stains.

Originally written in Russian but first published in English due to difficulties with censors, Tolstoy's essay 'What Is Art?' seeks to define art and its purpose—to Tolstoy, art may be anything that communicates emotion. Influenced by his radical Christian ethics, Tolstoy takes an inclusive view on the subject, writing that jokes, home decor, and church services all can be considered art as long as they convey feeling. He evaluates the work of many of his contemporaries, praising literature like Victor Hugo's Les Miserables, Charles Dickens's A Tale of Two Cities, and Harriet Beecher Stowe's Uncle Tom's Cabin for their universal themes of brotherhood. A rare and significant manuscript for one of Tolstoy's philosophical works.