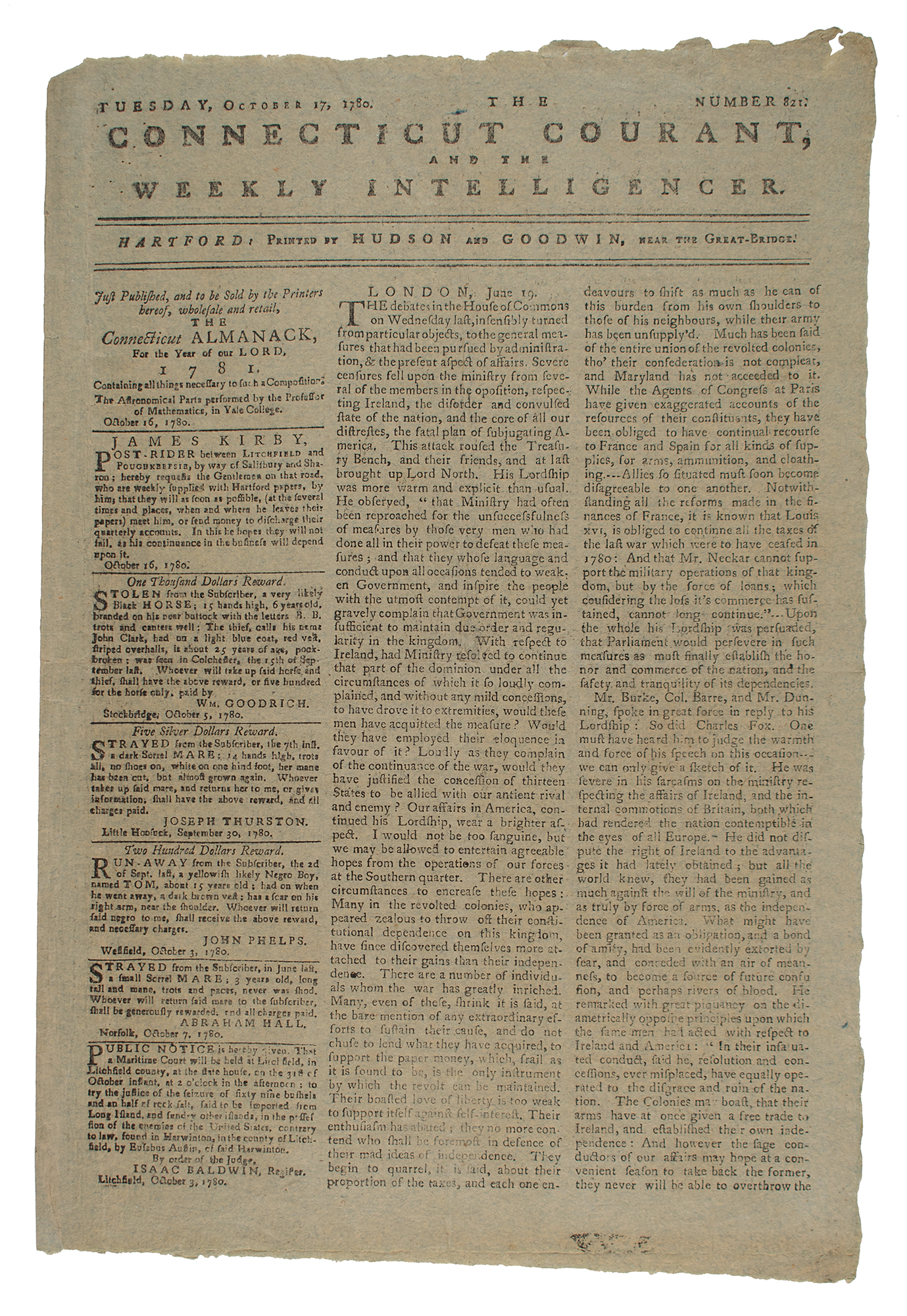 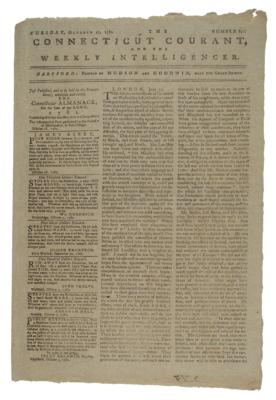 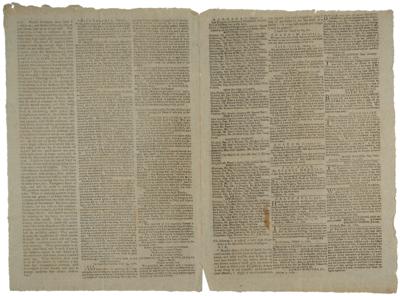 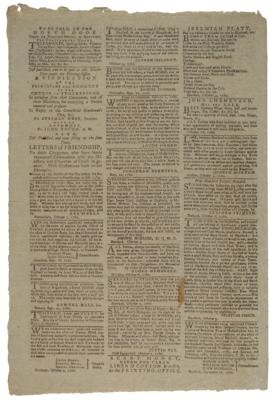 The Connecticut Courant, and the Weekly Intelligencer, October 17, 1780, printed by Hudson & Goodwin, Hartford. Possibly the best early, contemporary, authenticated account of the Gen. Benedict Arnold’s and Major John Andre’s treasonous plot to deliver West Point to the enemy. The reports are introduced with this statement to readers: “As the public curiosity and anxiety must naturally be raised to a high pitch by the providential detection of the perfidy and treachery of a late distinguished general officer of the United States, we shall endeavour to give our readers such particulars as have come to our knowledge and are well authenticated.”

“On Monday, the 25th ult. Congress received a letter from General Greene inclosing one from Col. Hamilton, one of General Washington’s aids, informing him that a scene of the blackest villainy had just been disclosed; that Arnold was gone off to the enemy; that Col. Andre, Gen. Clinton’s principal aid and confidant, was apprehended in disguise in our camp; that West Point (where Arnold commanded) was to be the sacrifice and that all the dispositions were made to for delivering it upon Monday the 25th ult. at night…” Reference to Gen. Greene’s letter. “As soon as these letters were read, the contents were communicated to the Vice President and the Council of this State and the Justice of the Supreme Court, who directed an immediate seizure of all of Arnold’s papers…”

Full text of “Arnold’s infamous letter to our Great Commander” which includes: “I am induced to ask your protection for Mrs. Arnold from every insult and injury that the mistaken vengeance of my country may expose her to. It ought to fall only on me…” This is followed by: “A concise description of the Figures exhibited and paraded through the streets of this city on Saturday last” detailing how Arnold was treated and burned in effigy.

Letter from Major Andre to his Excellency George Washington which includes: “Buoyed above the fear of death, by the consciousness of a life spent in the pursuit of honor, and fully sensible that it has at no time been stained by any action, which at this serious moment could give me remorse—I have to solicit your Excellency…that I may be permitted to die the death of a soldier—It is my last request and I hope it will be granted.” Report from New York: “We hear from New York that on Arnold’s arrival there he was saluted with 13 cannon; and dined that day with the commandant of the city.” And this is followed by: “Extract from Gen. Greene's Orders” which begins: “Treason of the blackest die, was yesterday discovered. General Arnold, who commanded at West Point, lost to every sentiment of honour, of private and public obligation, was about to deliver up that important post into the hands of the enemy. Such an event must have given the American cause a deadly wound, if not a fatal stab; happily the treason has been timely discovered to prevent the fatal misfortune…” Extensive front page reports on debates in the House of Commons concerning the situation in America, with the report carrying over to take a full column on page 2. An extraordinarily historic report of one of the more infamous events of the Revolutionary War.