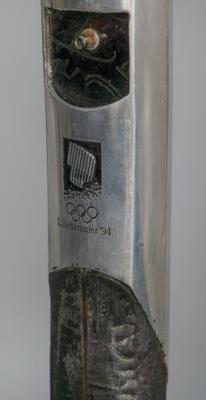 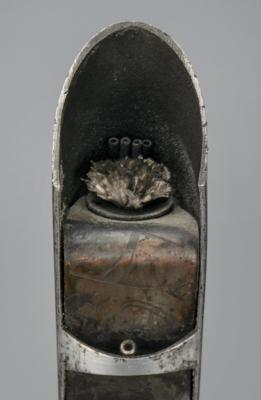 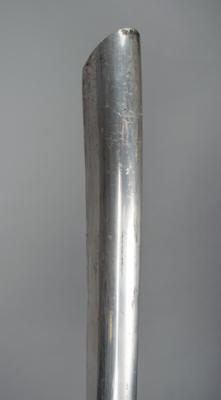 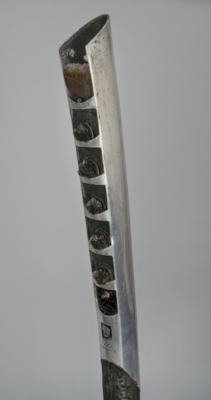 Magnificent official Lillehammer 1994 Winter Olympics torch, constructed of wood, iron, and copper, measuring an impressive 60″ in length, designed by André Steenbuch Marandon and Paal Christian Kahrs, and manufactured by Paal J. Kahrs Arkitekter AS, Statoil. Resembling that of a sheath knife, the torch is highlighted by its long birchwood handle that symbolises Norway tradition, with the upper section consisting of a polished aluminium blade that conversely reflects the nation’s industrial modernity and technology. The base of the burner is engraved with the logo of the XVII Olympic Winter Games, and the upper and lower sections of the inner copper plate feature several event pictograms. In spite of its imposing, martial appearance, the supple elongated shape, coupled with its considerable length, were chosen with the view of forming a harmonious extension between the torch and its bearer—the creators of this torch bestowed it with the poetic name ‘Noble.’

The torch bears two mounting holes and is in well-used condition, with singeing and scuffs to the blade, and notable burn marks and scrapes to the handle, which bears a heat-crack to where the burner meets the wood; given the torch’s strikingly rugged design, none of the mentioned ‘flaws,’ with the exception of the custom mounting holes, should be deemed as imperfections, nor do they detract from its overall awesome impression. Accompanied by the original 'Torchbearer Proof' certificate of authenticity, dated January 28, 1994, issued to Wenche Spidsberg for a relay run in the town of Gjøvik. The certificate is mounted and framed with a photo of Spidsberg carrying the torch to an overall size of 11.25″ x 25.5″.

The flame of the XVIIth Olympic Winter Games was lit in Olympia, Greece, on January 16, 1994, and, with the use of 350 torches and 6,916 torchbearers, traveled 18,000 kilometres (11,000 miles) over the course of 27 days to the Lysgårdsbakkene Ski Jumping Arena in Lillehammer, Norway. It was the sixth Winter torch relay to have more than one route, which included a visit to the Arctic Circle and the premiere instance of a torch being passed between two parachutists. Before Prince Haakon lit the cauldron at the opening ceremony, Stein Gruben, in spectacular and fiery fashion, astounded spectators when he launched from the ski jump with torch in hand. Nearly the height of a human being, this massive, hugely desirable Olympic artifact holds the unique distinction as being the longest and thinnest torch in Olympic history—the first Lillehammer torch that we have ever offered.