Rare handwritten letter by the Basque essayist: "The intimate object of humanity is to realize history, which is the thought of God on the earth of man" 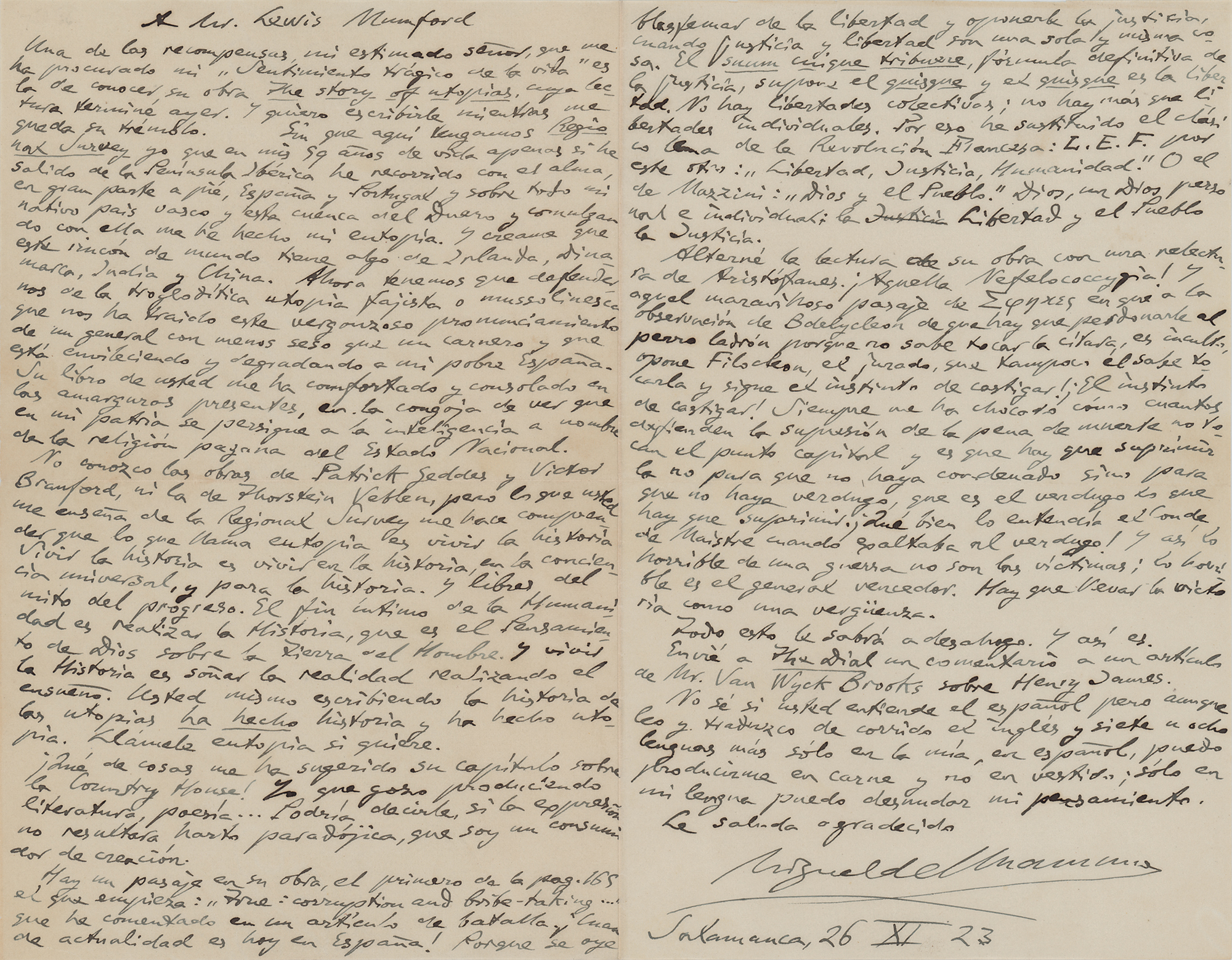 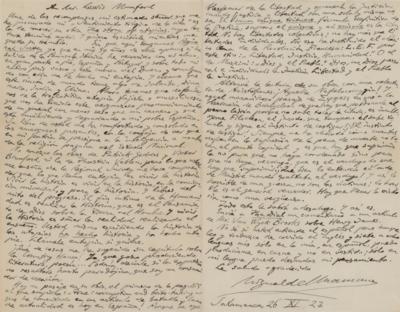 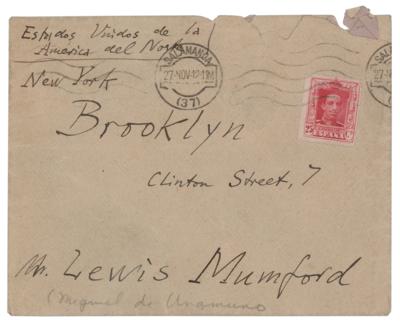 Rare handwritten letter by the Basque essayist: "The intimate object of humanity is to realize history, which is the thought of God on the earth of man"

Spanish essayist, novelist, poet, playwright, and philosopher (1864-1936) known for his 1912 philosophical essay 'The Tragic Sense of Life,' and his 1917 novel Abel Sánchez: The History of a Passion. Very rare ALS in Spanish, two pages on two adjoining sheets, 5 x 8, November 26, 1923. Lengthy handwritten letter to writer and critic Lewis Mumford, shortly after a military coup brought Miguel Primo de Rivera to power in 1923. In part (translated): "One of the recompenses, esteemed sir, which have been obtained for me by my 'Sentimiento tragico de la vida' is that of becoming acquainted with your work The Story of Utopias, the reading of which I finished yesterday. And I want to write to you while its tremor remains with me. Without our having here a Regional Survey, I, who in my 59 years of life have scarcely left the Iberian Peninsula, have gone over with all my soul, largely on foot, Spain and Portugal and above all my native Basque country and this basin of the Duero, and, communing with it, have made for myself my utopia. And believe me that this corner of the world has something of Ireland, Denmark, India and China. Now we have to defend ourselves against the troglodytic Fascist or Mussoliniesque utopia which has been brought to us by this shameful pronouncement of a general with less brains than a sheep and who is making vile and degrading my poor Spain. Your book has comforted and consoled me in the present bitterness, in the affliction of seeing that in my country intelligence is persecuted in the name of the pagan religion of the National State…What your book tells me…makes me understand that what you call utopia is to live history. To live history, is to live in history, in the universal consciousness, and for history, free from the myth of progress. The intimate object of humanity is to realize history, which is the thought of God on the earth of man. And to live history is to dream reality through realizing the dream You, yourself, writing the history of utopias have made history and have made a utopia…I who take enjoyment in producing literature, and poetry might tell you, if the expression did not appear so paradoxical, that I am a consumer of creation." In fine condition. Accompanied by the original mailing envelope (addressed in Unamuno's hand), and a complete translation.