Woolf on her influential essay A Room of One's Own—"Many of the arguments were left rather crude, because of my audience—young girls" 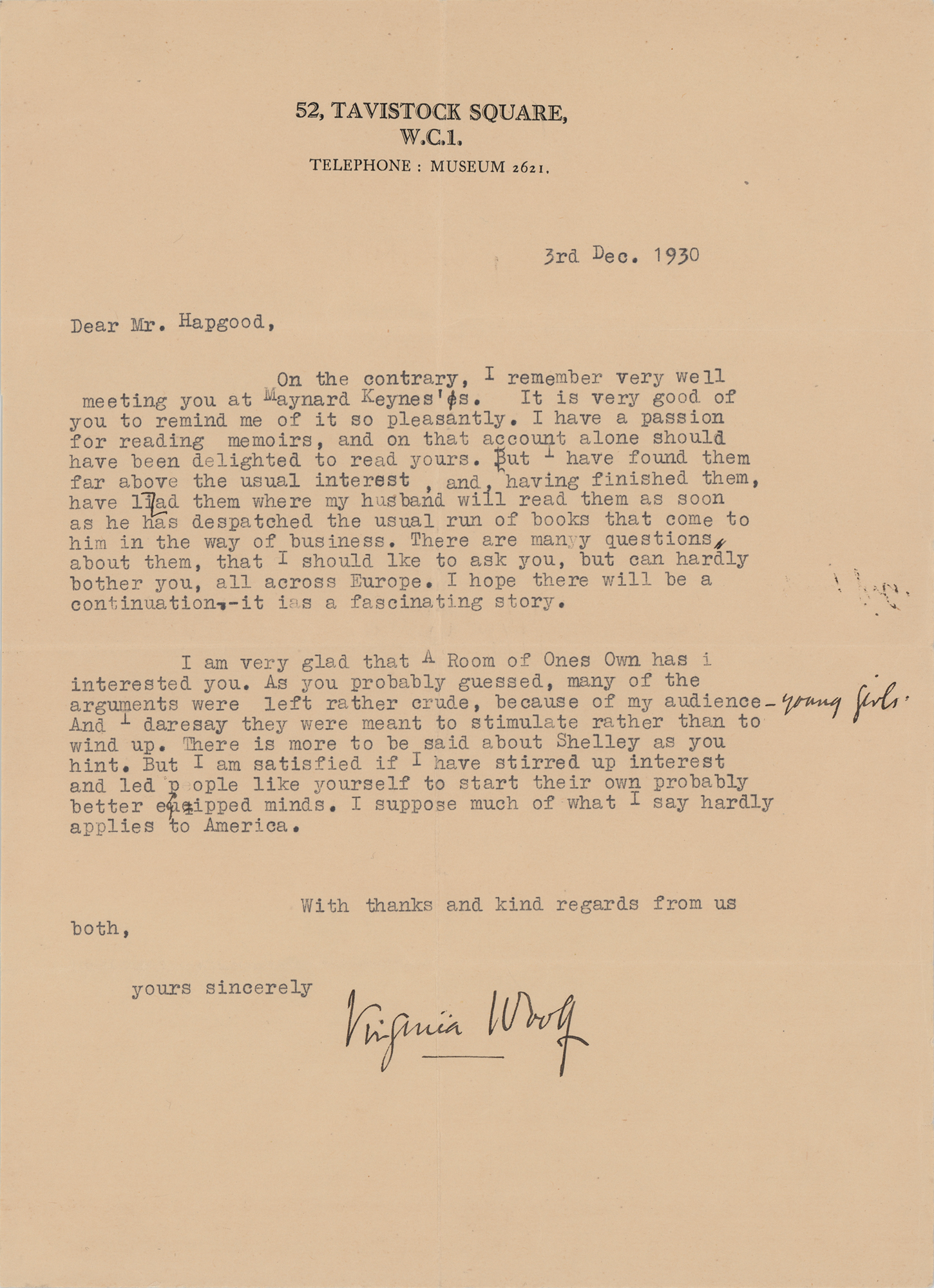 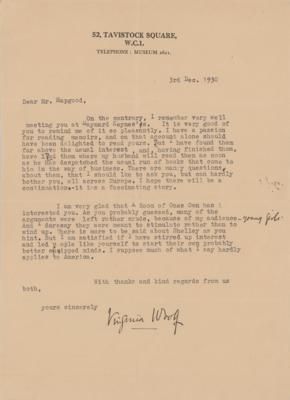 Woolf on her influential essay A Room of One's Own—"Many of the arguments were left rather crude, because of my audience—young girls"

TLS, one page, 7.75 x 10.5, 52 Tavistock Square letterhead, December 3, 1930. Letter to Mr. Hapgood, presumably editor and author Norman Hapgood, in full: "On the contrary, I remember very well meeting you at Maynard Keynes'. It is very good of you to remind me of it so pleasantly. I have a passion for reading memoirs, and on that account alone should have been delighted to read yours. But I have found them far above the usual interest, and, having finished them, have laid them where my husband will read them as soon as he had despatched the usual run of books that come to him in the way of business. There are many questions about them, that I should like to ask you, but can hardly bother you, all across Europe. I hope there will be a continuation—it is a fascinating story. I am very glad that A Room of Ones Own has interested you. As you probably guessed, many of the arguments were left rather crude, because of my audience—young girls. And I daresay they were meant to stimulate rather than to wind up. There is more to be said about Shelley as you hint. But I am satisfied if I have stirred up interest and led people like yourself to start their own probably better equipped minds. I suppose much of what I say hardly applies to America. With thanks and kind regards from us both." Woolf adds "young girls" and makes a few corrections to the text in her own hand. In fine condition.

Published in September 1929, A Room of One's Own was an extended essay based on two lectures Woolf delivered the previous year at Newnham College and Girton College, women's constituent colleges at the University of Cambridge. Assuredly her most well-known non-fiction work, A Room of One's Own is considered a key work of feminist literary criticism, one which argues for both a literal and figurative space for women writers within a literary tradition dominated by men, and which spawned the much-quoted maxim: ‘A woman must have money and a room of her own if she is to write fiction.’ Also of import is the mention of noted economist John Maynard Keynes, a close friend of Woolf's and a prominent member of the esteemed Bloomsbury Group, a small and informal network of artists, writers, and intellectuals whose works and outlook helped influence literature, aesthetics, criticism, and economics, as well as modern attitudes towards feminism, pacifism, and sexuality.

Norman Hapgood (1868-1937) worked as the editor of Collier's Magazine from 1902 to 1912, and then as editor of Harper's Weekly before being appointed Minister to Denmark by President Woodrow Wilson, serving for only a six-month period. He later became editor of Hearst's International and wrote an expose on Henry Ford's antisemitism in the article, ‘The Inside Story of Henry Ford's Jew-Mania.’ The memoir Woolf references is likely Hapgood’s autobiography, The Changing Years.