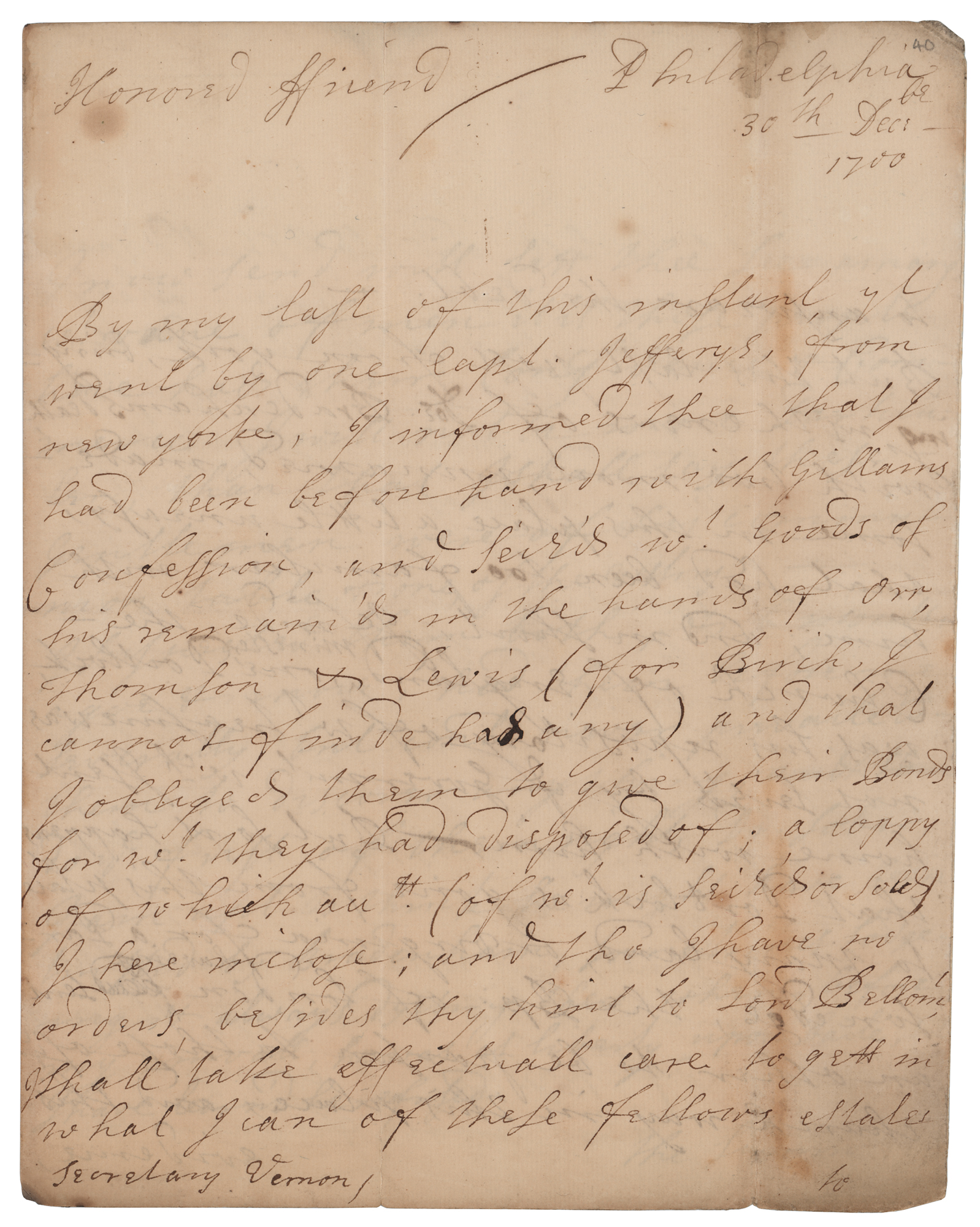 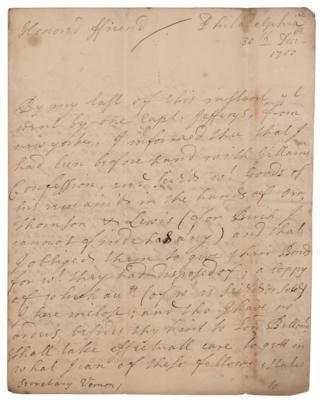 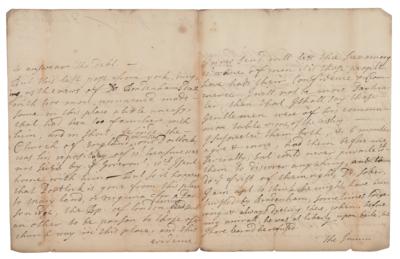 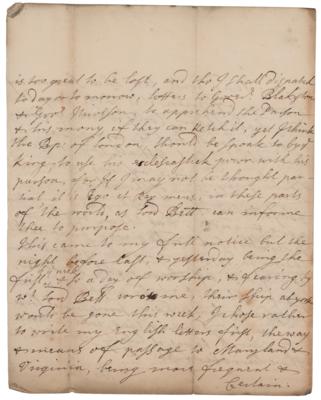 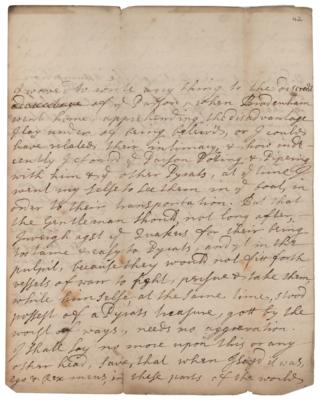 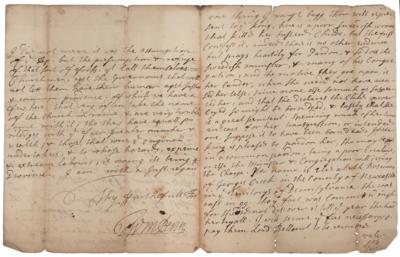 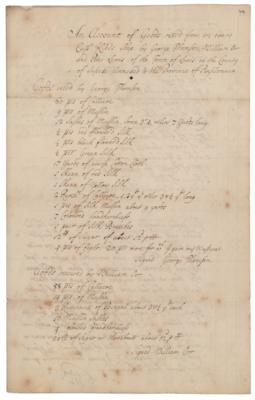 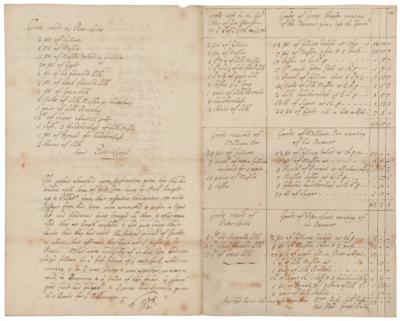 ALS signed “Wm. Penn,” seven pages on two sets of adjoining sheets, 7 x 9, December 30, 1700. Handwritten letter to Secretary of State James Vernon, written from Philadelphia, transmitting an account of goods received from on board Captain Kidd's ship and referencing several figures central to Kidd's saga. The letter chiefly concerns the suspicious Rev. Edward Portlock, who, as it turns out, agreed to hide some 600 pieces of gold handed to him by Dr. Robert Bradinham, physician to the famed Capt. Kidd. Portlock, who decried piracy from the pulpit, hid the pirate treasure beneath the church floor. When Bradinham was found out and apprehended, he agreed to testify against Kidd in return for a pardon; here, Penn has evidently received false news of Bradinham's death. Penn also refers to "Gillams Confession," presumably the memoir written in prison by a one-time pirate associate of Kidd, who went by both James Gilliam and James Kelly. Richard Coote, 1st Earl of Bellomont, also mentioned several times by Penn, was the colonial governor of Massachusetts and, initially, a major financial sponsor of William Kidd's privateering efforts. After Kidd's exploits devolved into piracy, Lord Bellomont engineered his capture at Boston, and returned Kidd to England, where he was tried, convicted, and hanged in 1701.

Penn writes, in part: "By my last of this instant, ye went by one Capt. Jeffreys, from New Yorke, I informed thee that I had been beforehand with Gillams Confession, and seiz'd wt. goods of his remain'd in the hands of Orr, Thomson & Lewis (for Birch, I cannot fine had any) and that I obliged them to give their Bonds for wt. they had disposed of; a coppy of which is atth. (of what is seiz'd or sold) I here inclose; and tho I have no orders, besides thy hint to Lord Bellom't, I shall take effectuall care to gett in what I can of these fellows estates to answer the debt.

But this last post from York, bringing us the news of Doc. Bradenham's death, with two more, unnamed, made some in this place a little uneasy, that had been too familiar with him; and in short, I finde, the Church of England Minister, one Portlock, was his repository of wt. treasure was not seiz'd by the Governm't wch. I sent home with him—But so it happens, that Portlock is gone from this place to Maryland, or Virginia for a Parsonedge, the Bp. of London haveing sent another to be parson to those of ye church way in this place, and this evidence I now send will lett thee see among wt. vaine of men it is those people have had their Confidence & Commerce. I will not be more Particular, than that I shall say these gentlemen were of his communion table & one, of the vestry.

I suspected them both, & 6 months agoe & more, had them before me severally, but could never prevaile wth them to discover anything, and to do the first of them right, Dr. Sober, I am apt to think he might have been misled by Dr. Bradenham, sometimes lodgeing & always dyeting there, when, before my arrivall, he was at liberty upon baile, but I have learn'd he refused. The Summ is too great to be lost, and tho I shall dispatch today or tomorrow, letters to Govern'r Blakston & Gove. Nicolson, to apprehend the Parson & his mony, if they can ketch it, yet I think the Bp. of London, should be spoak to by ye King, to use his ecclesiastick poewr with his parson, for, if I may not be thought partial, it is Ego et Rex meus, in these parts of the world, as Lord Bett. can informe thee to purpose.

This came to my full notice but the night before last, & yesterday being the first of ye week, & so a day of worship, & of easing by wt. Lord Bett. wrote me, their ship at York would be gone this week, I chose rather to write my English letters first, the way & means of passage to Maryland & Virginia, being more frequent & certain.

I waved to write any thing to the discredit of ye Parson, when Bradenham went home, apprehending the disadvantage I lay under of being believe'd, or I could have related their intimacy, & how indecently I found ye Parson Plotting & Pipeing with him & ye other Pyrats, at ye time I went my selfe to see them in ye boat, in order to their transportation. But that the Gentleman should, not long after, inveigh agst. ye Quakers for their being too tame & easy to Pyrats, and yet in the pulpit, because they would not fitt forth vessels of warr to fight, persue & take them, while himselfe, at the same time, stood possest of a Pyrats treasure, gott by the worst of ways, needs no aggravation. I shall lay no more upon this or any other head, save, that when I sayd it was, ego & Rex meus, in these parts of the world, I did not mean it was the assumption of ye Bp. but the presumtion & refuge of that sort of folks, yt call themselves Churchman, agst the Governours that will not lett them have their humour agst Justice & common prudence of which we have a few here, that very often take the name of the church in vaine, & are very troublesome with it, tho they have equall privileges with ye farr greater number & wealth; & those, that were ey originall undertakers, & to whose hazards, expence & extream labours, is owing its being Province."

In a page-long handwritten postscript, initialed "W.P.," Penn adds, in part: "One thing I must begg thou will represent to ye King,, here is a poor Sweedish woman that kill'd her basterd Childe, but she first confest it, indeed there is no other evidence byt prays heartily for Pardon, & so doth the Sweedish minister, & many of his congregation and the motive they goe upon, is her candor, when she needed not have accused her selfe, since none else somuch as suspected her, and that the she declares the Child never cryed, so might be born dead, & lastly, that she is a great penitent, spending much of her time in tears for her transgression, or intended one, suppose it to have been born dead. If the King is pleased to pardon her, she may be put in a common pardon, being a poor creature, or else the Minister & Congregation will defray the charge."

The enclosed manuscript document, headed "An Account of Goods recv'd from on board Capt. Kidd's ship by George Thomson, William Orr and Peter Lewis of the Town of Lewis in the County of Sussex annexed to the Province of Pennsylvania," is initialed by Penn on the second page, "W.P.," and totals three pages, 7.5 x 12, documenting evidence seized from the three men "upon information given that they had traded with some of Kid's Crew," including fine textiles—"callicoe," "muslin," "flower'd silk," and "coloured handkerchiefs"—sugar, and "Pieces of Eight." It is likely that the bulk of these items originally came from Kidd's principal prize, the Quedagh Merchant, which carried a cargo that included 130 bales of textiles and 70 to 80 tons of sugar. In very good to fine condition, with scattered light foxing and small stains. A remarkable letter and document on the legendary pirate and his famous loot.