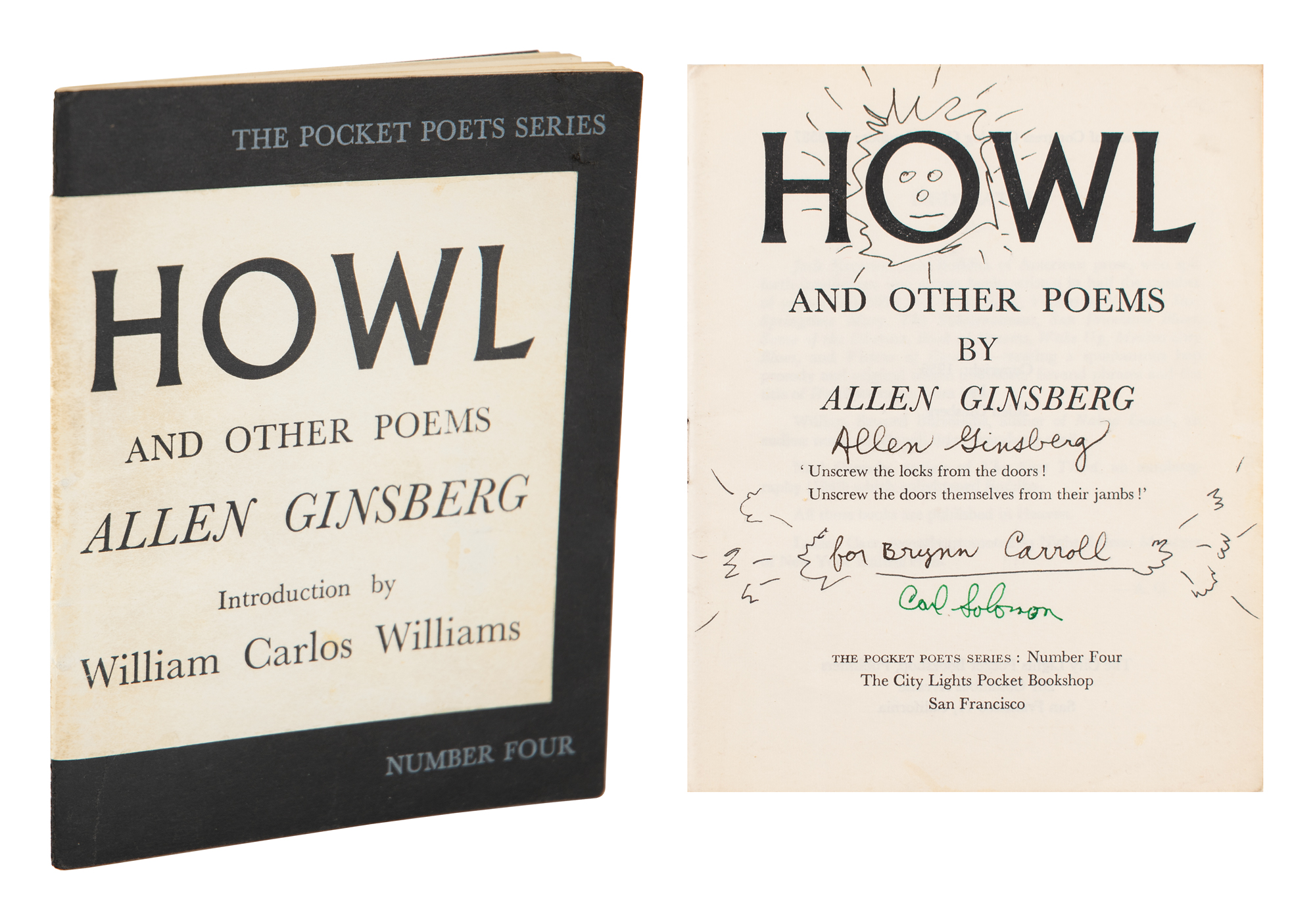 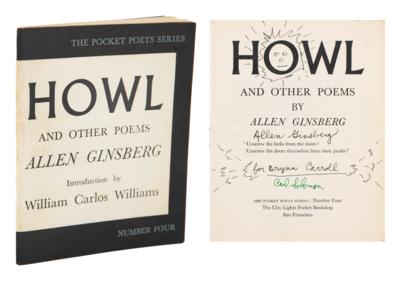 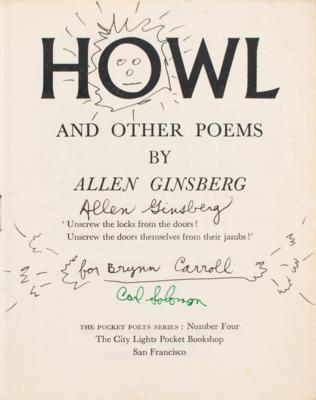 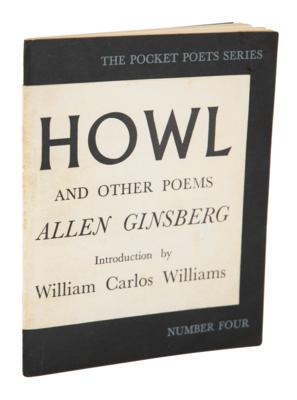 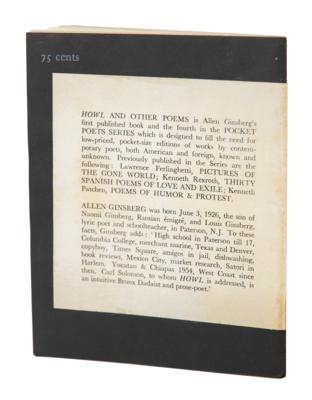 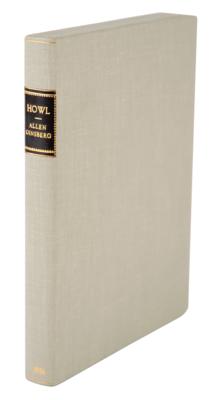 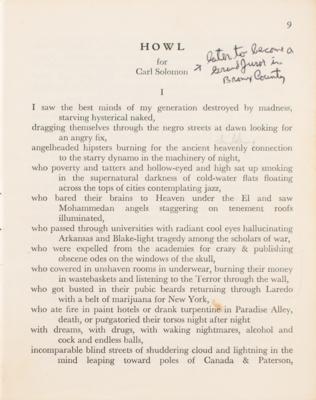 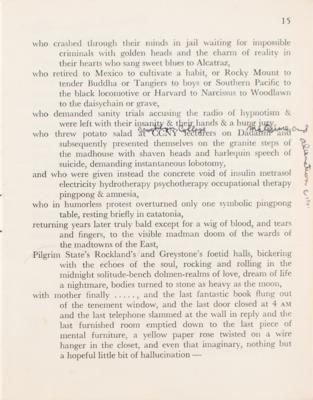 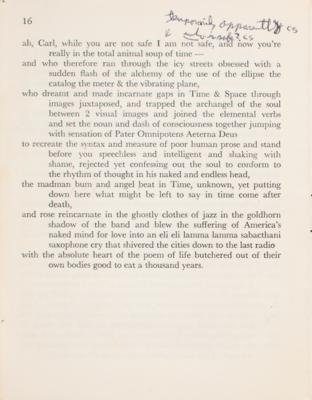 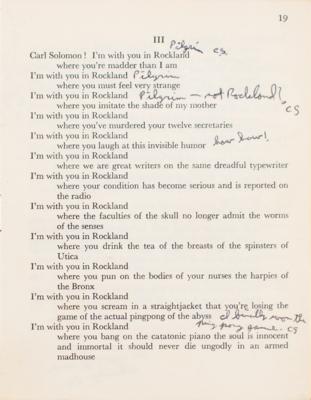 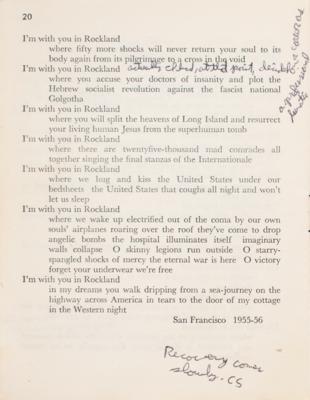 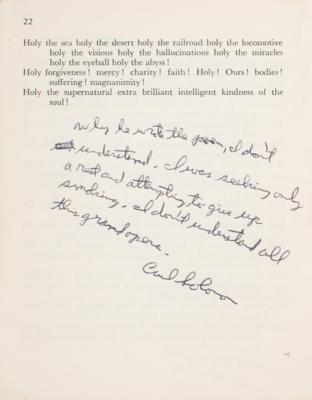 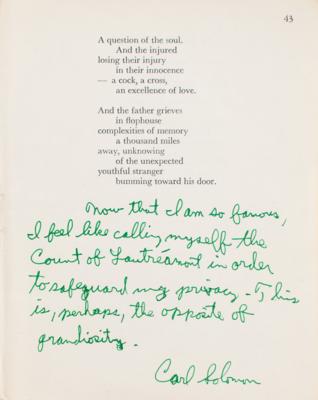 Signed book: Howl and Other Poems. First edition, first printing (with Lucien Carr listed on the dedication page and a period after Harlem on the rear). San Francisco: The City Lights Pocket Bookshop, 1956. Softcover, 5 x 6.25, 44 pages. Signed and inscribed on the title page in black felt tip, "Allen Ginsberg, for Brynn Carroll," with sketches of a sun in the "O" and around the recipient's name. Also signed in green felt tip by Carl Solomon, to whom the poem 'Howl' is dedicated, who annotates numerous pages with his complaints and comments about Ginsberg's poem.

Solomon draws an arrow from his name on page 9, "later to become a Grand Juror in Bronx County"; makes some corrections on page 15 ("Brooklyn College" for CCNY); asks, "Who is safe?" on page 16; corrects "Pilgrim" for Rockland several times in Verse III; and writes "Recovery comes slowly" at the conclusion. After 'Footnote to Howl,' Solomon writes and signs: "Why he wrote the poem, I don't understand. I was seeking only a rest and attempting to give up smoking. I don't understand all this grand opera. Carl Solomon." On page 43, Solomon writes and signs again: "Now that I am so famous, I feel like calling myself the Count of Lautreamont in order to safeguard my privacy. This is, perhaps, the opposite of grandiosity. Carl Solomon." Autographic condition: fine. Book condition: VG/None, with slight lifting to adhesive of the wrap-around paper label on rear, minor soiling, and light creasing to the edge of the front wrapper. Accompanied by a custom-made slipcase.

Only 1,000 copies of the first run of Howl were printed, and this example—signed by Ginsberg and the poem's subject, unexpectedly made famous by the controversial work—is a truly outstanding example of the landmark Beat Generation book.