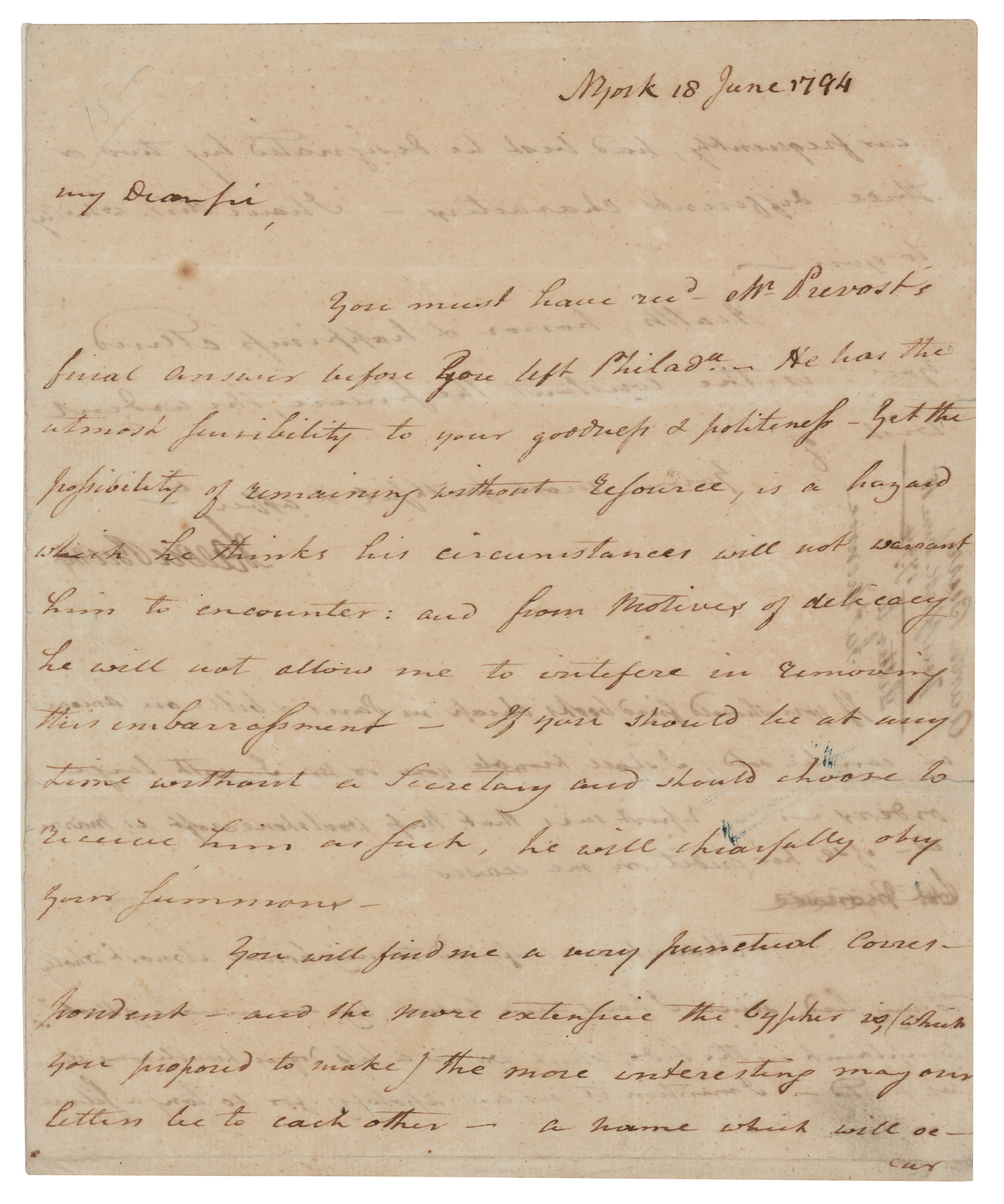 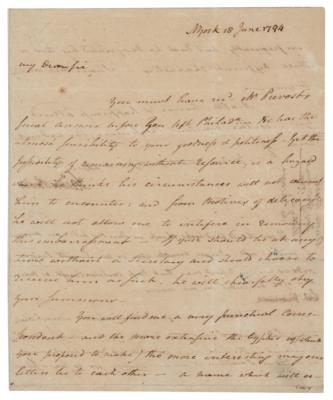 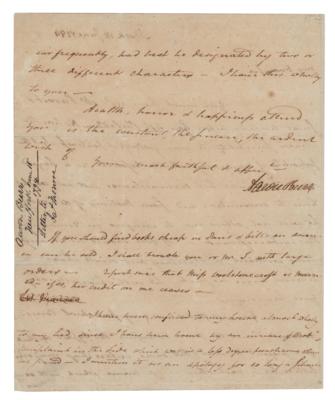 ALS, one page both sides, 7.5 x 9, June 18, 1794. Handwritten letter to James Monroe, who was about to leave for France as US Minister to France, written at the height of Burr's power as a Senator from New York. In part: "You must have rec'd Mr. Prevost's final answer before you left Philad'a. He has the utmost sensibility to your goodness & politeness—yet the possibility of remaining without resource, is a hazard which he thinks his circumstances will not warrant him to encounter: and from motives of delicacy he will not allow me to interfere in removing this embarrassment—If you should be at any time without a secretary and should choose to receive him as such, he will cheerfully obey your summons. You will find me a very punctual correspondent—and the more extensive the cypher is which you proposed to make, the more interesting may our letters be to each other—a name which will occur frequently, had best be designated by two or three different characters—I leave this wholly to you."

He adds a postscript: "If you should find books cheap in Paris & bills on America can be sold, I shall trouble you or Mr. L. with large orders—Report says that Miss Woolstonecraft is married—if so, her credit on me ceases. I have been confined to my house almost wholly to my bed since I have been home by an increase of that complaint in the side which was in a less degree troublesome when we parted—I mention it as an apology for so long a silence." In fine condition, with slightly irregular toning.

In this fascinating letter between two of early America's most intriguing figures, Burr opens with a reference to a "Mr. Prevost," likely his stepson, John Bartow Prevost, who spoke French as a first language and would later become Monroe's South American commissioner. He goes on to suggest the use of a code for their correspondence during Monroe's time abroad—an interesting facet of many diplomatic letters of the period, when 'nomenclator' codes were popular. Though it is unknown whether such cypher letters exist between the two, Monroe used a successful code which came to be known as 'Mr. Monroe’s Cypher.' In his postscript, Burr makes clear his desire for inexpensive books—like the other Founders, especially Jefferson, Burr was a voracious reader and collector of all manner of books—and refers to some disillusionment with the 'mother of feminism' Mary Wollstonecraft, whom his family had greatly admired. Accompanied by an article on this letter by Douglass F. Rohrman, published in Manuscript, Vol. 69, No. 4 (Fall 2017), exploring Burr and its context in further detail.