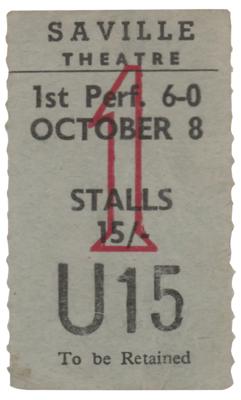 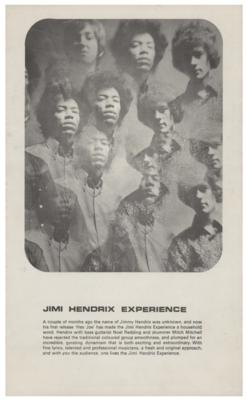 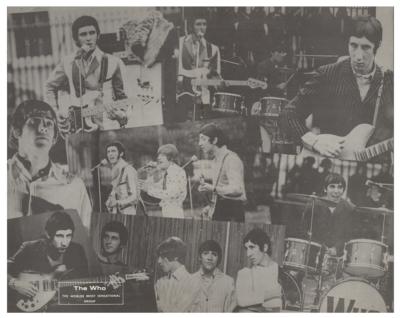 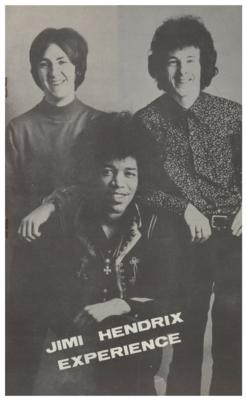 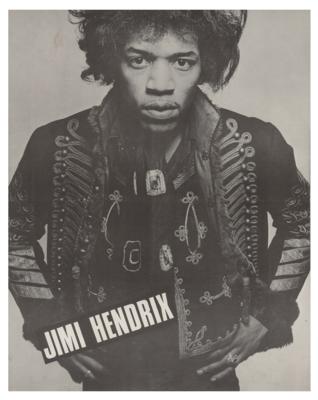 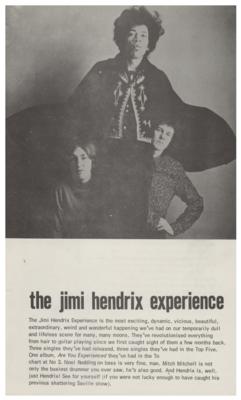 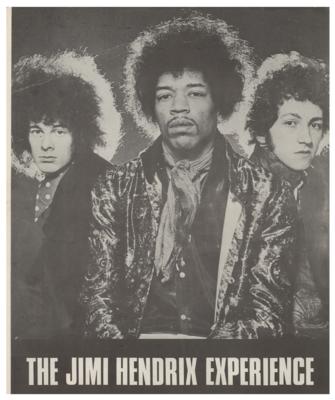 Complete set of concert programs and one ticket for all five concerts by the Jimi Hendrix Experience at the Saville Theatre in London, England. The programs contain outstanding images and information on the scheduled acts, with the four earlier examples, each bearing vibrant psychedelic cover artwork by Simon and Marijke, measuring 6 x 9.5, and the later white program with red text, “Sundays at the Saville,” measuring 6 x 10. The programs, in chronological order:

January 29, 1967: the Jimi Hendrix Experience's first concert at London's Saville Theatre, in support of headliners The Who, produced by Beatles manager Brian Epstein. The program notes: "A couple of months ago the name of Jimmy Hendrix was unknown, and now his first release 'Hey Joe' has made the Jimi Hendrix Experience a household word.” In attendance at this historic show were John Lennon, Paul McCartney, Eric Clapton, Jack Bruce, Brian May (pre Queen), LuLu, and Linda Keith, who had originally recommended Hendrix to Chas Chandler of The Animals. Chandler became Hendrix's manager, helping to launch him into superstardom.

May 7, 1967: the second Jimi Hendrix Experience show at the Saville, with openers Denny Laine with Strings Attached, The 1-2-3, and Garnet Mimms.

June 4, 1967: the third Experience show at the Saville, with openers Denny Laine with His Electric String Band, Procol Harum, and The Chiffons. Less than a month after releasing their full-length debut, Are You Experienced, Hendrix and company opened their third Saville show by playing the title track from the Beatles eighth album, Sgt. Pepper's Lonely Hearts Club Band, which had been released only days prior. Among those in attendance were George Harrison and Paul McCartney, who were both understandably floored by the compliment. Exactly two weeks later, the Jimi Hendrix Experience made their American debut at the Monterey Pop Festival, where they were booked at the recommendation of McCartney. A true piece of rock music history.

October 8, 1967: the final show with openers Eire Apparent, The Herd, and The Crazy World of Arthur Brown; this program also includes an original 1.25 x 2 ticket stub from the show, issued as No. U15. In overall very good to fine condition, with creasing to the Sundays at the Saville program. Accompanied by a certificate of authenticity from Tracks.