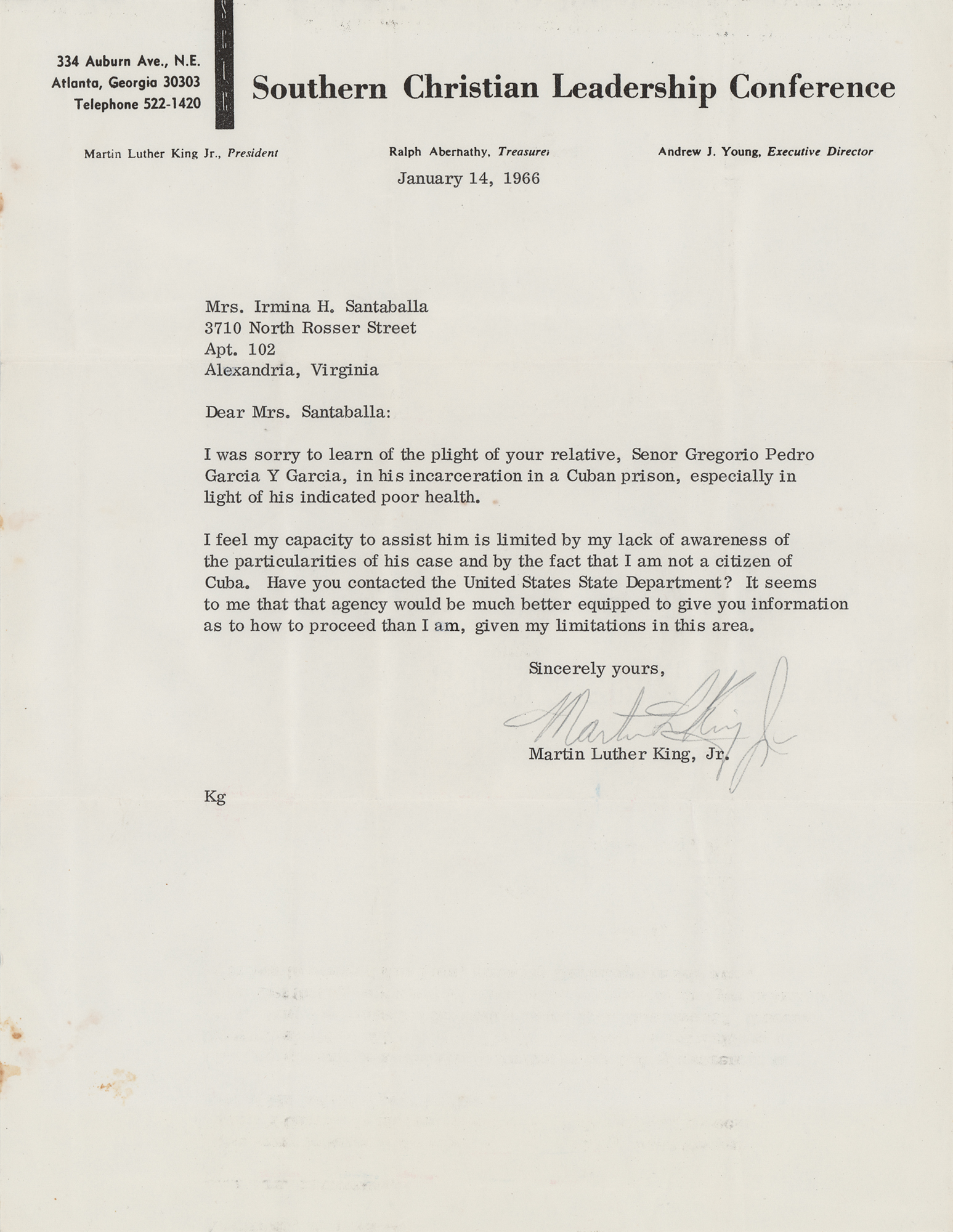 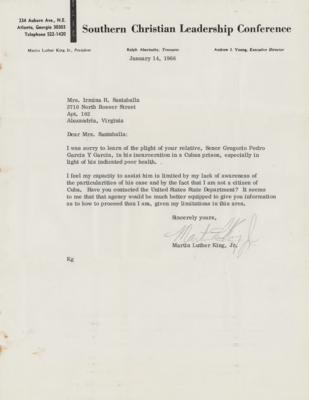 TLS signed “Martin L. King, Jr.,” one page, 8.5 x 11, Southern Christian Leadership Conference letterhead, January 14, 1966. Letter to Irmina H. Santaballa, in full: "I was sorry to learn of the plight of your relative, Senor Gregorio Pedro Garcia Y Garcia, in his incarceration in a Cuban prison, especially in light of his indicated poor health. I feel my capacity to assist him is limited by my lack of awareness of the particularities of his case and by the fact that I am not a citizen of Cuba. Have you contacted the United States State Department? It seems to me that that agency would be much better equipped to give you information as to how to proceed than I am, given my limitations in this area." In very good to fine condition, with overall creasing, intersecting folds, and some light staining to the lower left corner.

As King was leading a non-violent mass march on Georgia's state capitol in support of the newly elected representative, Democrat Julian Bond, Dr. King informed Santaballa that he was unable to help her and that she should seek the help of the State Department concerning the incarceration of her relative in a Cuban prison.

After Castro seized power in 1959, racism against blacks increased in Cuba and many found themselves in prison, joining the dissidents, insurgents, criminals, and missionaries from 1959-1965. Strained relations existed with the Christian churches, many which stockpiled arms for the CIA's Bay of Pigs counterrevolution. As a result, 80% of the priests and ministers fled Cuba for the United States. The exiled formed their own churches in the States, combining with African-American Christians who shared their common interests—justice, equality, and reconciliation. In King, they found a new hero who reminded them of their own patriot, the 19th century writer Jose Marti, who became the symbol for Cuba's bid for independence against Spain. As a writer, he used words to promote liberty, Cuban independence, and intellectual freedom. King's nonviolent social change strategies and movements inspired them and Cuban church leaders who preached social Christian responsibility.

In the end, a small victory was won in 1966. On April 8th, the Cuban government released Nemesio Garcia, pastor of the McCall Baptist Church in Havana. Among those originally arrested with Garcia were 51 Baptists and two American missionaries. Thirty-four received sentences, though some served house arrest only, and the Americans were jailed for six and 10-year terms. The fate of the incarcerated Garcia Y Garcia remains unknown.