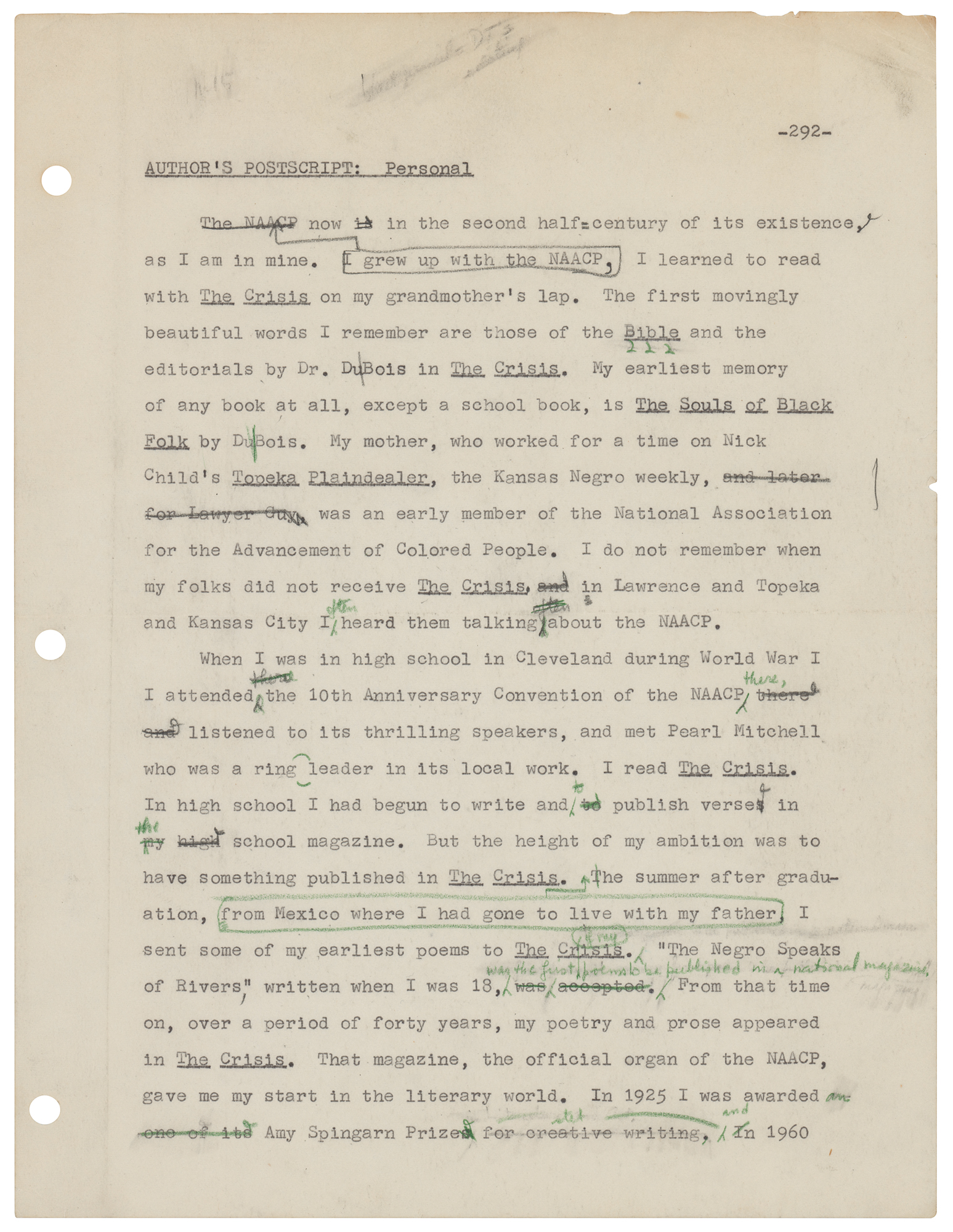 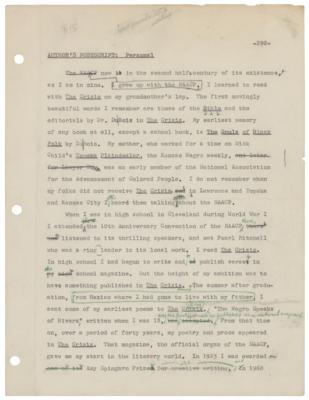 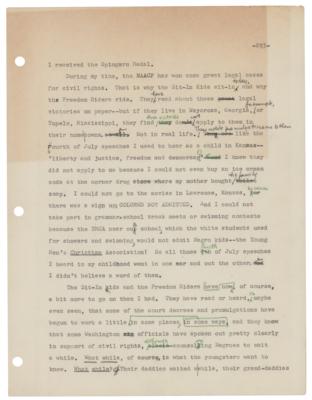 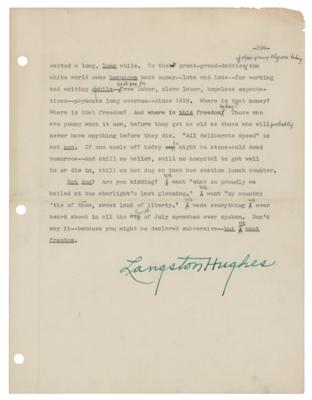 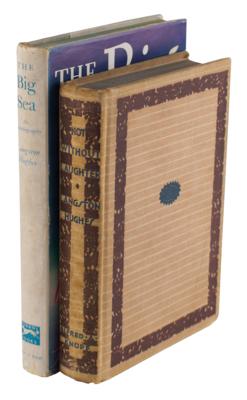 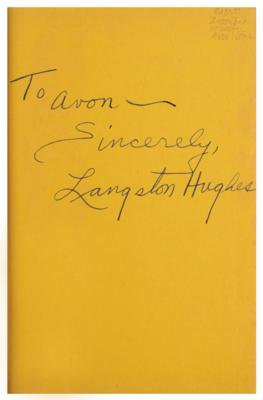 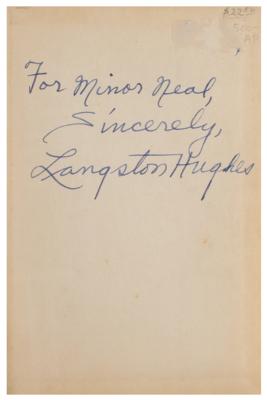 Remarkable TMS, three pages, 8.5 x 11, no date but circa 1962. Extensively hand-edited and corrected draft entitled "Author's Postscript: Personal" from his 1962 book Fight for Freedom: The Story of the NAACP. In part: "I grew up with the NAACP, now in the second half-century of its existence as I am in mine. I learned to read with The Crisis on my grandmother's lap. The first movingly beautiful words I remember are those of the Bible and the editorials by Dr. Du Bois in The Crisis. My earliest memory of any book at all, except a school book, is The Souls of Black Folk by Du Bois…In high school I had begun to write and to publish verse in the school magazine. But the height of my ambition was to have something published in The Crisis. From Mexico where I had gone to live with my father the summer after graduation, I sent some of my earliest poems to The Crisis. 'The Negro Speaks of Rivers,' written when I was 18, was the first of my poems to be published in a national magazine. From that time on, over a period of forty years, my poetry and prose appeared in The Crisis. That magazine, the official organ of the NAACP, gave me my start in the literary world…During my time, the NAACP has won some great legal cases for civil rights. That is why the Sit-In Kids sit-in today, and why the Freedom Riders ride. They have read about these legal victories on paper…These noble promulgations are to them like the Fourth of July speeches I used to hear as a child in Kansas-'liberty and justice, freedom and democracy.' I knew they did not apply to me because I could not even buy an ice cream at the corner drug store…Some Washington officials have spoken out pretty clearly in support of civil rights, although counseling Negroes to wait a while. What while, of course, is what the youngsters want to know. What while? Their daddies waited a while, their grand-daddies waited a long, long while…We want 'what so proudly we hailed at the starlight's last gleaming.' We want 'my country 'tis of thee, sweet land of liberty.' We want everything we ever heard about in all the Fourth of July speeches ever spoken. Don't say it-because you might be declared subversive-but we want freedom." Also includes two signed books: a 1930 hardcover edition of Not Without Laughter, signed and inscribed on the first free end page in fountain pen, "To Minor Neal, Sincerely, Langston Hughes"; and a 1945 hardcover edition of The Big Sea, signed and inscribed on the first free end page, "To Avon, Sincerely, Langston Hughes." In overall very good to fine condition, with file holes to the left margins of the typescript and a small adhesive remnant to the signed page of Not Without Laughter. Accompanied by a clipped magazine article from September 1962 that quotes extensively from the present typescript.

In addition to its abundance of amazing content, this manuscript demonstrates Hughes's facility with language as he oscillates between high rhetoric and common vernacular in integrating a history of his own literary career with an account of the Civil Rights Movement. Copiously corrected by hand—hardly a phrase goes by without some sort of emendation—the draft provides insight into his process in composing such a piece. Most interestingly, the original typed version of the closing lines uses the first-person singular, "I." With pencil edits changing each of these to "we," Hughes embraces his role as a spokesman for the plurality of black America as the Civil Rights Movement entered full force in the early 1960s.