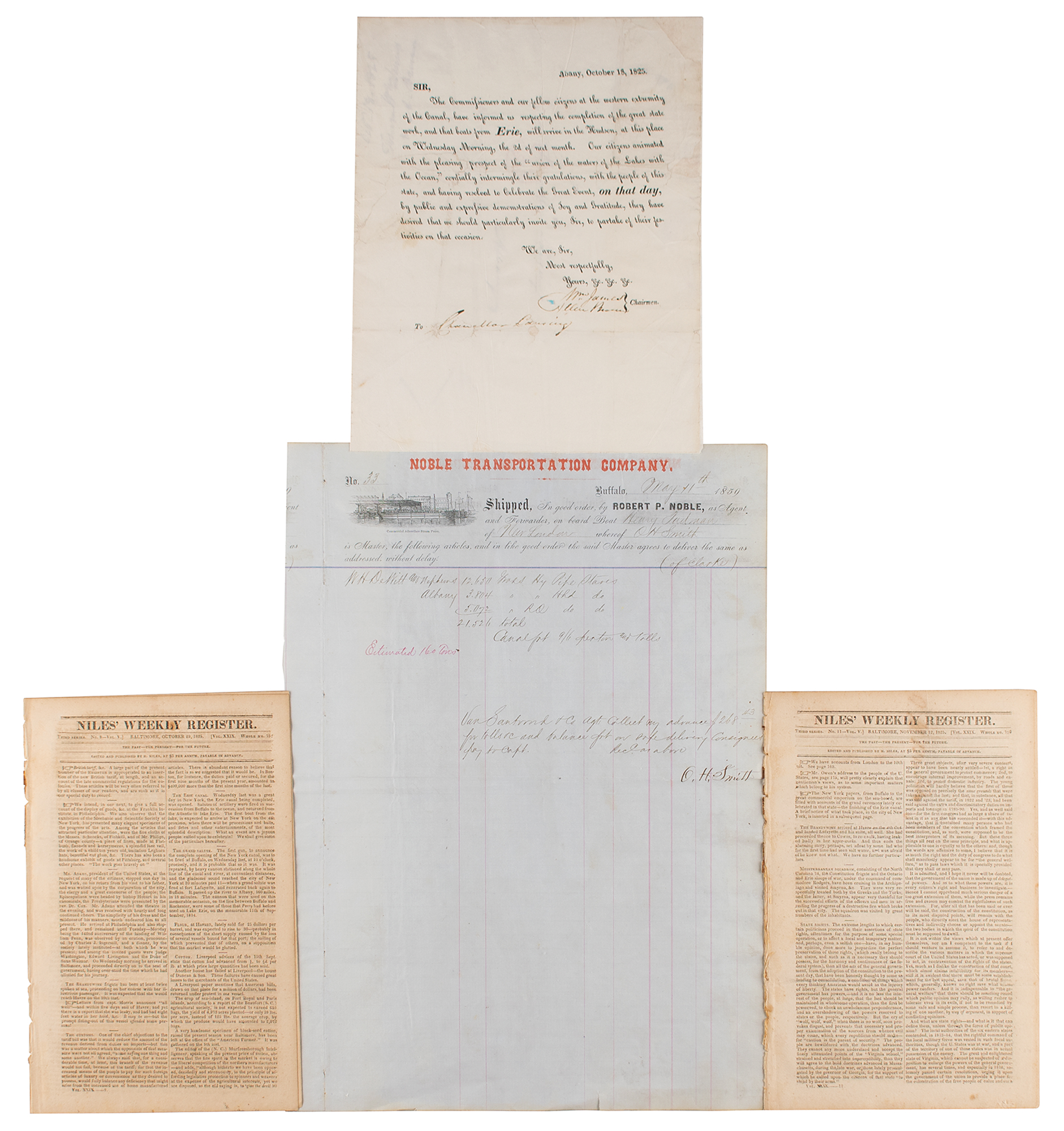 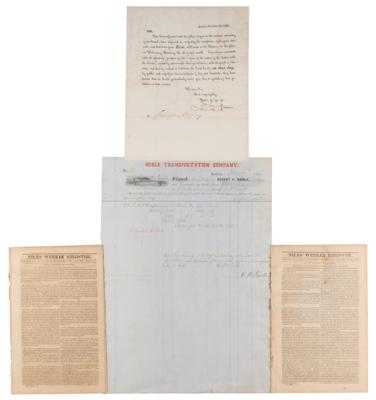 Four items associated with the Erie Canal, highlighted by an official invitation to Chancellor Lansing for its opening in 1825. The invitation is one page, 8 x 10, October 18, 1825, in full: "The Commissioners and our fellow citizens at the western extremity of the Canal, have informed us respecting the completion of the great state work, and that boats from Erie, will arrive in the Hudson, at this place on Wednesday Morning, the 2d of next month. Our citizens animated with the pleasing prospect of the 'union of the waters of the lakes wit the Ocean,' cordially intermingle their gratulations, with the people of this state, and having resolved to Celebrate the Great Event, on that day, by public and expressive demonstrations of Joy and Gratitude, they have desired that we should particularly invite you, Sir, to partake in their festivities on that occasion." Signed at the conclusion in ink by William James and Allen Brown, Chairmen. Addressed by hand “To Chancellor Lansing.” Addressed and postmarked “ALBANY Oct. 22.” Return address “Oct 18. 1825 -- William James by A. Brown.” In very good condition, with extensive professional repairs to creases, tears, and paper loss, particularly to the integral address leaf.

On the morning of October 26, 1825, the first flotilla of boats, bound for New York from Lake Erie, entered the canal at Buffalo carrying the Governor and Canal Commissioners [in the packet, 'Seneca Chief']. In New York harbor Clinton poured water, carried from Lake Erie, into the waters of the Atlantic commemorating thereby the joining of the two bodies by way of the Erie Canal, and the great voyage was over. Albany was reached November 2, 1825, where a great celebration took place. The gubernatorial party arrived at New York, November 4, where was held a great public demonstration in celebration of the event. The trip from Buffalo to Albany had occupied seven days.

The recipient of the invitation, John Ten Eyck Lansing Jr. (January 30, 1754 - vanished December 12, 1829), represented New York as one of three representatives at the Constitutional Convention in 1787. Lansing was appointed a Justice of the New York State Supreme Court in 1790 and on 15 February 1798 he was elevated to the post Chief Justice. In 1801, he also became the second Chancellor of New York, succeeding Robert R. Livingston.

Also included in this lot:

(1) Niles’ Weekly Register, October 29, 1825, page one report “The Erie Canal - Wednesday last was a great day in New York, the Erie canal being completed, was opened.” “The Grand Salute - The first gun, to announce the complete opening of the New York canal, was to be fired at Buffalo, on Wednesday last, at 10 o’clock, precisely, and it is probable that it was so . . .”

(2) Niles’ Weekly Register, November 17, 1825, Page one announcement brief reference to “accounts of the grand ceremony lately celebrated [for] the finishing of the Erie canal.” Detailed report captioned “New York Canals” - “the first boat from Lake Erie arrived at New York on the 4th inst - with details about the celebration in NYC.