Civil War-dated appointment by President Lincoln for a Kansas notable 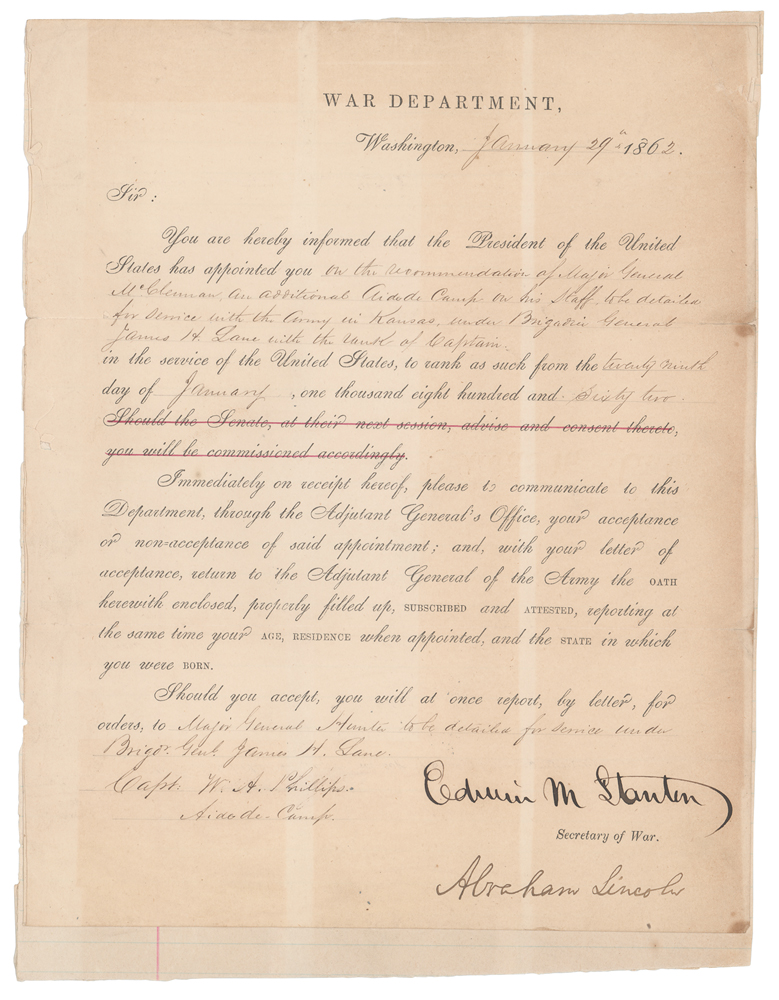 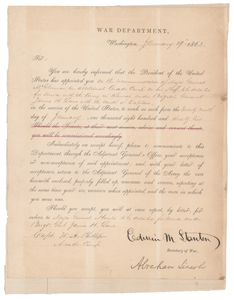 Civil War-dated appointment by President Lincoln for a Kansas notable

Partly-printed DS as president, one page, 8 x 10, January 29, 1862. President Lincoln appoints Capt. William A. Phillips an additional aide-de-camp of General McClellan, specifying that he is being detailed to serve “with the army in Kansas under Brigadier General James H. Lane with the rank of Captain.” Signed neatly at the conclusion by Lincoln, and boldly countersigned by Secretary of War Edwin M. Stanton. Affixed to a slightly larger sheet with newspaper clippings about Phillips on the reverse. In very good condition, with irregular toning, a split to the end of a horizontal fold, and several small edge tears.

In 1858, William A. Phillips (1824-93) the recipient of this commission, co-founded Salina, Kansas, and became the first Justice of the Kansas Supreme Court under the Lecompton Constitution. In 1861, Senator James H. Lane, noted militia commander of the Kansas 'Red Legs' or 'Jayhawkers,' made a number of raids into Missouri. Lane’s sacking of the town of Osceola inspired the novel 'Gone to Texas' which was the basis for the 1976 Clint Eastwood movie 'The Outlaw Josey Wales.'

In December 1861, President Lincoln appointed Lane a Brigadier General of Volunteers. As a fellow Kansan, Phillips immediately requested and was granted a captaincy on Lane’s staff (this commission). On March 21, 1862, Lane’s commission was canceled following concerns that a sitting US Senator could not simultaneously hold a general’s commission. Eight days later, seeing his position with Lane vanish, Phillips obtained a commission as a Major in the U.S. Army. Lane’s commission would be reinstated in April 1862, but by that time Phillips had already obtained his new commission. Phillips was assigned to command the First Indian Regiment. In July 1862 he was made Commanding Colonel of the Third Indian Regiment. In October 1862 he became Commanding Colonel of the Union Indian Brigade, serving as such throughout the remainder of the war. Post-war, Phillips served as legal counsel to the Cherokee Nation and as a two-term US Congressman from Kansas.