Nearing the end of his presidency, Pierce seeks respite in New Hampshire, "If quiet shall be restored in Kansas" 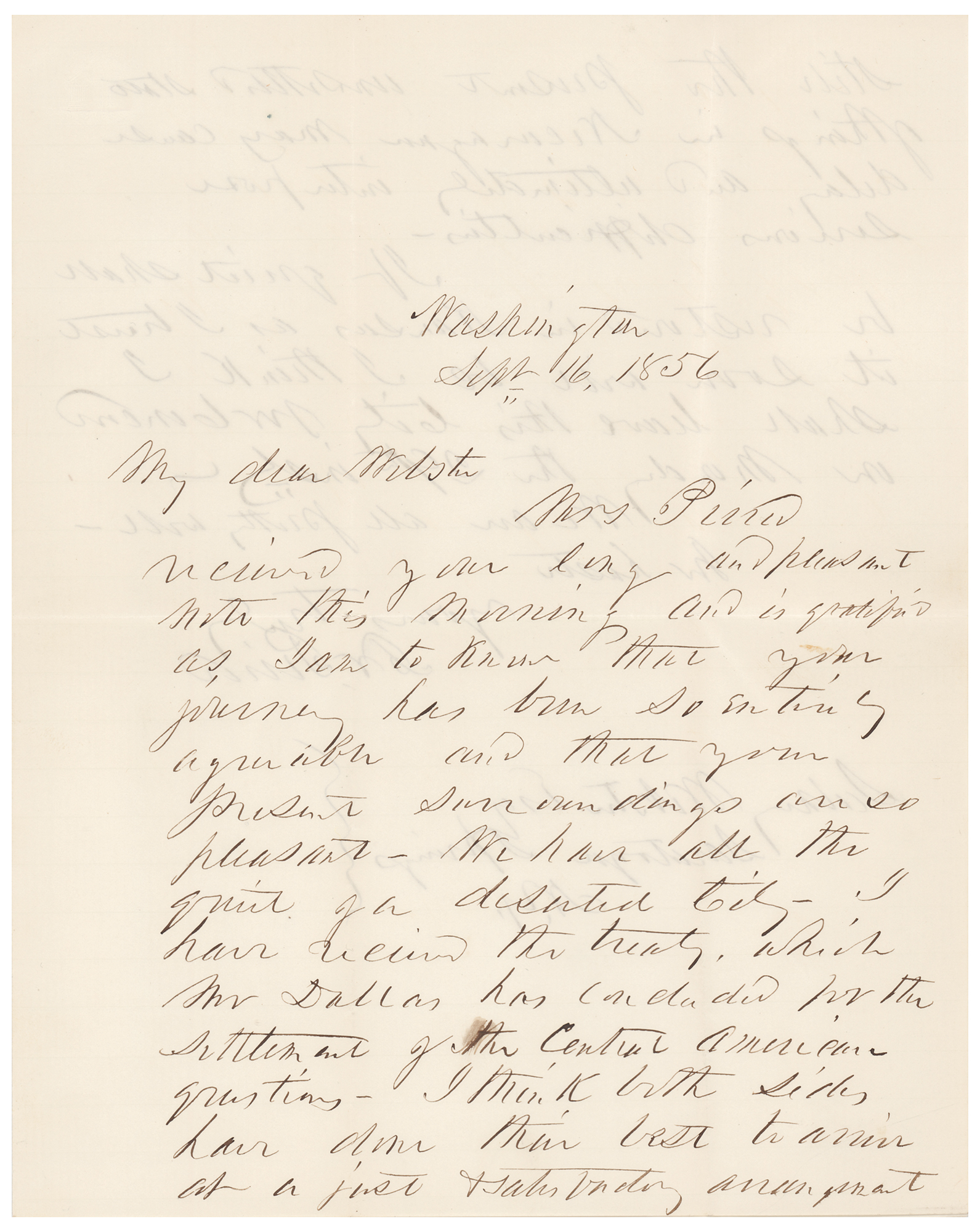 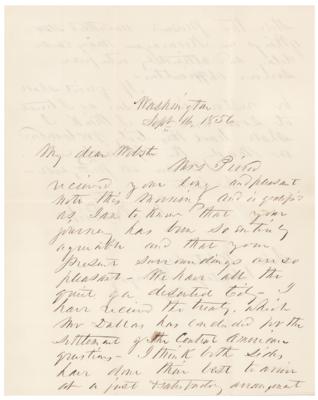 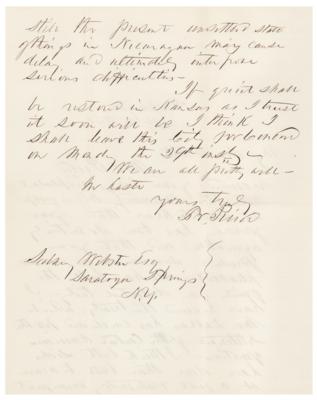 Nearing the end of his presidency, Pierce seeks respite in New Hampshire, "If quiet shall be restored in Kansas"

ALS as president signed “Fr. Pierce,” one page both sides, 7.75 x 9.75, September 16, 1856. Handwritten letter to his private White House secretary Sidney Webster, in full: "Mrs. Pierce received your long and pleasant note this morning and is gratified as I am to know that your journey has been so entirely agreeable and that your present surroundings are so pleasant. We have all the quiet of a deserted city—I have received the treaty, which Mr. Dallas has concluded for the settlement of the Central American questions. I think both sides have done their best to arrive at a just & satisfactory arrangement. Still the present unsettled state of things in Nicaragua may cause delay and ultimately interpose serious difficulties. If quiet shall be restored in Kansas as I trust it soon will be I think I shall leave this city for Concord on Monday the 29th inst. We are all pretty well—in haste." In fine condition.

The "unsettled state" of Nicaragua is no doubt in reference to the Filibuster War and American William Walker's invasion of the country in 1855. Walker, a San Francisco-based soldier of fortune, was known as an adventurer who sought to take control of Latin American countries with the purpose of making them a part of the United States. After a series of battles, Walker's army conquered the Legitimist capital of Granada and ruled the country through puppet President Patricio Rivas. When Pierce recognized Walker's regime as the legitimate government of Nicaragua on May 20, 1856, Walker declared himself president, re-instituted slavery, and made English the official language. He was overthrown during the 'National War' of 1857 and repatriated, but upon returning to Central America in 1860, he was captured and executed by firing squad at the age of 36.

Pierce’s efforts to lead the nation during his presidency were hindered by divisions within his party. Nonetheless, he reformed the Civil Service, the Departments of the Interior and Treasury; and oversaw the territorial expansion of the United States, most notably in completing the Gadsden Purchase, through which the U.S. obtained modern-day Arizona and southern New Mexico from Mexico, and which was strongly advocated by his Secretary of War Jefferson Davis. However, it was also territorial expansion and its relation to the issue of slavery that undermined Pierce’s presidency, specifically the Kansas-Nebraska Act, whose passage on May 30, 1854, contributed to the rise of the Republican Party. The legislation, drafted by Pierce and Democratic Senator Stephen A. Douglas, opened Kansans to settlement while allowing popular sovereignty to determine whether Kansas would allow slavery. This led both pro- and anti-slavery advocates to settle in Kansas for the sole purpose of casting their ballots on the matter. The resulting violence, such as that famously perpetrated by John Brown, was dubbed ‘Bleeding Kansas’ and helped further divide both the Democratic Party and the entire nation, propelling it toward civil war. Because of the political discord that marked Pierce’s presidency, the Democratic Party failed to nominate him for reelection.