A journalist's fireside advice from President Lincoln: "Emerson ain't worth more than a squirrel load of powder" 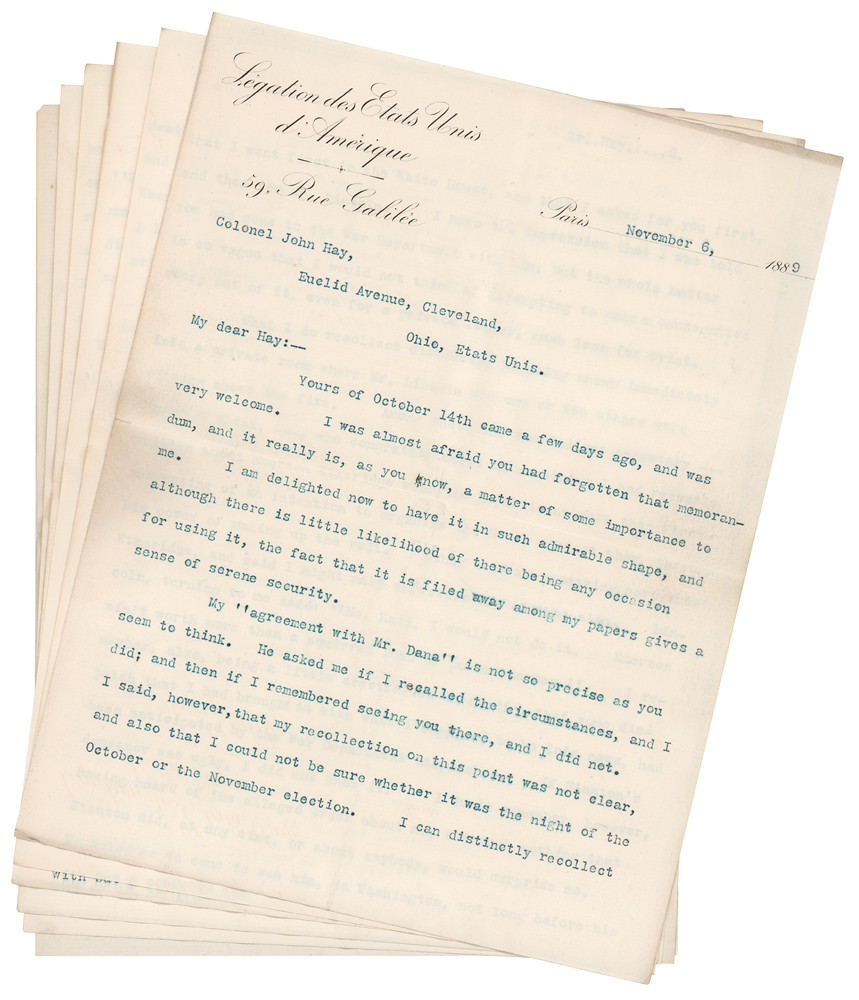 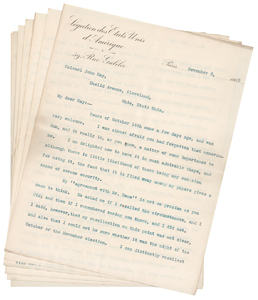 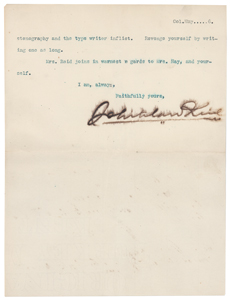 A journalist's fireside advice from President Lincoln: "Emerson ain't worth more than a squirrel load of powder"

American politician and journalist (1837-1912) who, among other accomplishments, edited the New York Tribune and served as Ambassador to France and the United Kingdom. During the American Civil War, Reid wrote under the by-line 'Agate,' and acted as a correspondent at several battlefields, including the Battles of Shiloh and Gettysburg. TLS as the U.S Minister to France, six pages, 7.5 x 10, Legation des Etats Unis d'Amerique letterhead, November 6, 1889. Lengthy letter to future Secretary of State John Hay, attempting to recall a deal he had made with Assistant Secretary of War Charles Dana at the White House 25 years ago, in part: "My 'agreement with Mr. Dana's is not so precise as you seem to think. He asked if I recalled the circumstances, and I did; and then if I remembered seeing you there, and I did not. I said, however, that my recollection on this point was not clear, and also that I could not be sure whether it was the night of the October or the November election. I can distinctly recollect that I went first to the White House, and that I asked for you first, and then for Mr. Lincoln. I have the impression that I was told you had gone to the War Department with him; but the whole matter is so vague that I would not think of attempting to make a consecutive story out of it, even for a private letter, much less for print.

What I do recollect distinctly is being shown immediately into a private room where Mr. Lincoln and one or two others were sitting about the fire. Among these was the Indiana secretary—Usher, I think,—who congratulated me on something I had recently written about Emerson Etheridge whom the Republicans were then first suspecting of an intention to organize the House against them, through his power of making up the roll. Usher told me something more about Etheridge, and said I might make effective use of that also. Lincoln, turning to me said: 'No, Reid, I would not do it. Emerson ain't worth more than a squirrel load of powder anyway.' I remember also, being a little crestfallen in finding that some dispatch that I had brought in with what I supposed to be late news, had been anticipated by the War Department dispatches. If Stanton's demeanor was ugly, I did not know it. I don't remember, however, having heard of the alleged order about me; although nothing that Stanton did, at any time, or about anybody, would surprise me. He asked me to come to see him, in Washington, not long before his death, read my sketch of Sherman, from 'Ohio in the War,' in proof, and told me, to my great surprise, that it was too hard on Sherman. When I expressed wonder at his saying that, he replied: 'The longer I live, the more I am convinced that a great secret in life is the art of learning to forget.'" In fine condition, with overall brushing to the signature.

Known as one of the most powerful and eloquent speakers of his day, Emerson Etheridge was a Tennessee congressman and senator (1819-1902) who was one of the few Southern congressmen to oppose the expansion of slavery and denounce Southern secession on the eve of the Civil War. Though a Southern Unionist, he criticized Abraham Lincoln over the Emancipation Proclamation.