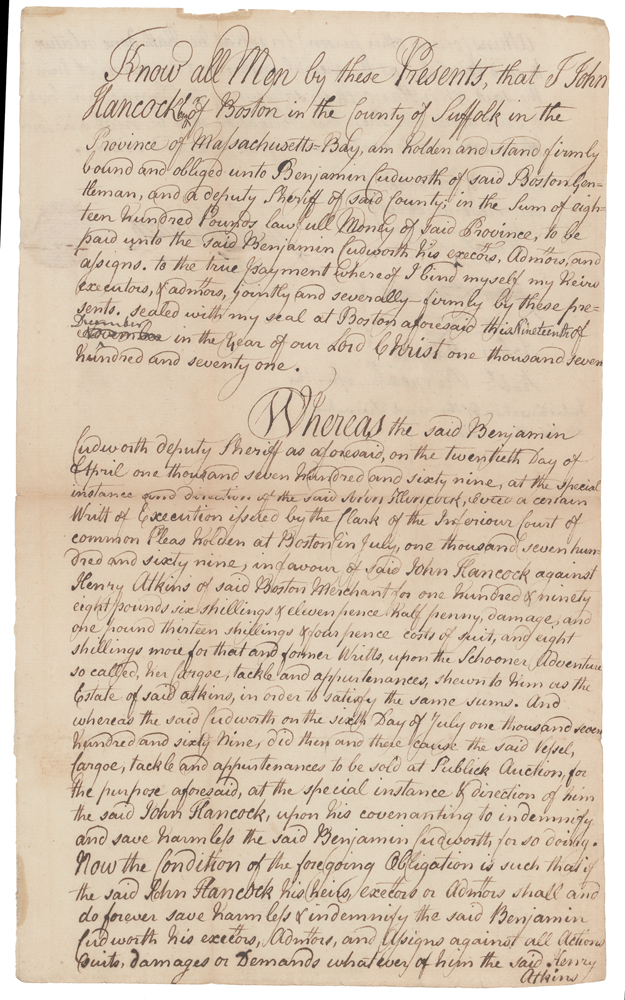 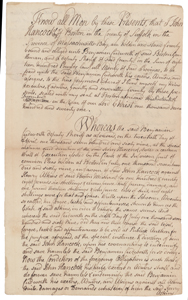 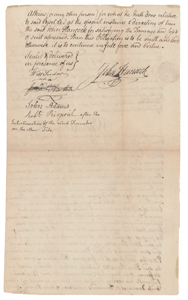 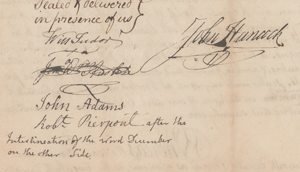 Remarkable Revolutionary War-dated manuscript DS, signed “John Adams" and "John Hancock,” one page both sides, 7.25 x 12, December 19, 1771. An indenture between Hancock and Benjamin Cudworth, a deputy sheriff in Boston. Hancock had obtained judgment against fellow merchant Henry Atkins for over 198 pounds, and Atkins's ship, the "Schooner Adventure," had been seized and sold at auction by Cudworth to satisfy the debt. In this document, Hancock indemnifies Cudworth for any judgment Atkins or any other party might have levied against Cudworth for that sale. Signed boldly at the conclusion by Hancock with his distinct signature, and countersigned by three witnesses, which of course includes John Adams, then a Boston representative to the Massachusetts General Court. The other two cosigners are Robert Pierpont, one of two coroners who performed an autopsy on Crispus Attucks following the Boston Massacre, and William Tudor, a wealthy lawyer and leading citizen of Boston who had joined George Washington's army in Cambridge; Tudor provided legal advice to Washington and, on July 29, 1775, was appointed Judge Advocate of the Continental Army. In fine condition, with professional reinforcement to the central horizontal fold.

A sensational document dated between two of Boston’s more defining moments: the Boston Massacre of 1770 and the Boston Tea Party of 1773. The maritime content of this document harkens back two years earlier when John Hancock’s sloop the Liberty was seized by British customs officials in June 1768. With John Adams serving as his lawyer, Hancock was prosecuted for smuggling in a highly publicized second trial beginning in October 1768 by a British admiralty court. After dragging out for nearly five months, the proceedings against Hancock were dropped without explanation.

That case aided greatly in the advancement of Adams’s legal career, but it would pale in contrast to his controversial defense of the British soldiers who perpetrated the Boston Massacre on March 5, 1770. Though he feared it would hurt his reputation, Adams believed that all men were entitled to a fair trial and deserved equal justice. His success in the trials—Adams secured the acquittal of Captain Thomas Preston and six British soldiers, with the remaining two convicted only of manslaughter rather than murder—elevated his reputation even further. An incredible document signed by two of America’s most beloved founding fathers, men who seven years later would run against each other in the first American presidential election.