Angus to his girlfriend during the 1977 Let There Be Rock Tour—"After we finish here in America we start Europe again (busy boy hah!)" 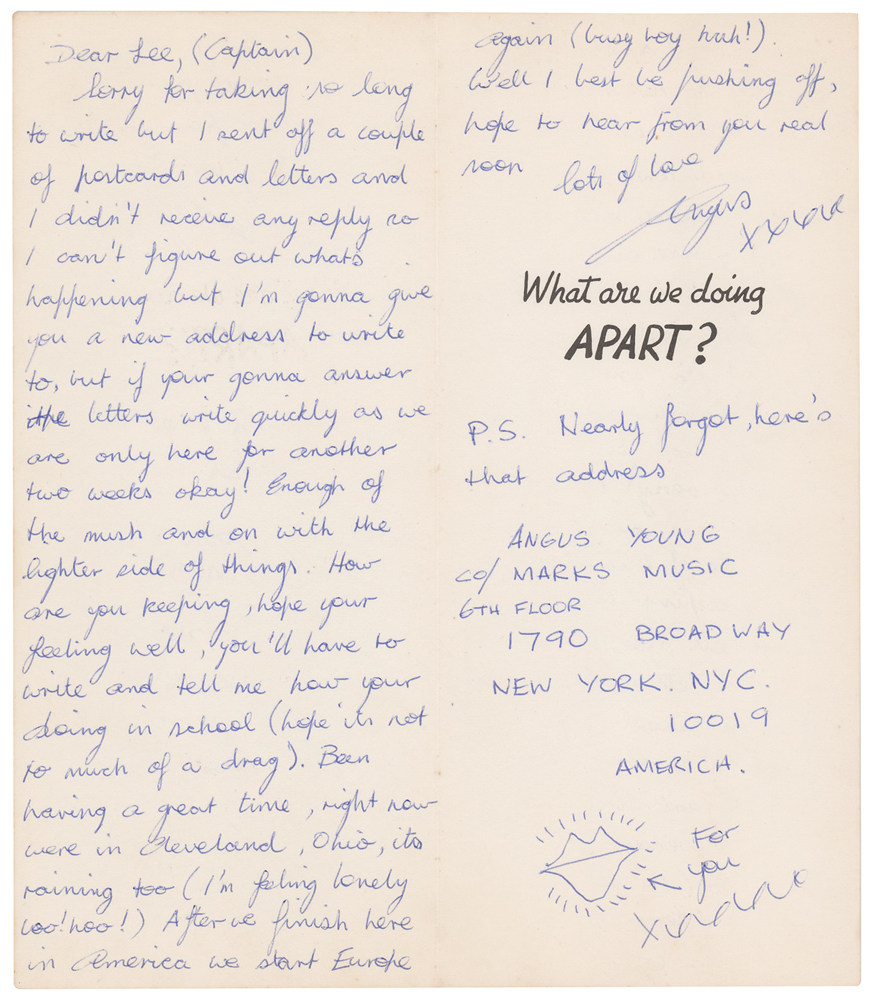 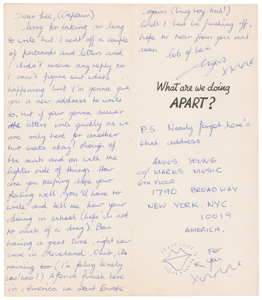 Angus to his girlfriend during the 1977 Let There Be Rock Tour—"After we finish here in America we start Europe again (busy boy hah!)"

ALS signed “Angus, xxxx,” penned inside a greeting card, measures 8 x 9.25 open, postmarked at Cleveland, Ohio, on August 23, 1977. Letter to "Lee (Captain)," his then girlfriend Lee Widdows, in full: “Sorry for taking so long to write but I sent off a couple of postcards and letters and I didn’t receive any reply so I can’t figure out what’s happening but I’m gonna give you a new address to write to, but if your gonna answer the letters write quickly as we are only here for another two weeks okay! Enough of the mush and on with the lighter side of things. How are you keeping, hope your feeling well, you’ll have to write and tell me how your doing in school ( hope its not to much of a drag). Been having a great time, right now were in Cleveland, Ohio, its raining too (I’m feeling lonely boo! hoo!) After we finish here in America we start Europe again (busy boy hah!) Well I best be finishing off, hope to hear from you real soon.” Young adds a postscript: “P.S. Nearly forgot, here’s that address: Angus Young, CO/ Marks Music, 6th Floor, 1790 Broadway, New York. NYC., 10019, America.” At the bottom of the card Young has drawn a ‘kissing lips’ sketch and adds “For you, xxxxx.” In fine condition, with some soiling to the outside of the card. Accompanied by a certificate of authenticity from Tracks and by the original hand-addressed mailing envelope. This letter was written when AC/DC were in Cleveland, Ohio, to perform at the Agora Ballroom on August 22, 1977, during the group’s ‘Let There Be Rock’ tour. After the Cleveland show, the band moved on to New York to perform concerts at the Palladium and CBGB, both on August 24, 1977.

This item is Pre-Certified by Real
Buy a third-party letter of authenticity for $35.00