From Washington to Wilson, a presidential collection spanning over 130 years of American history 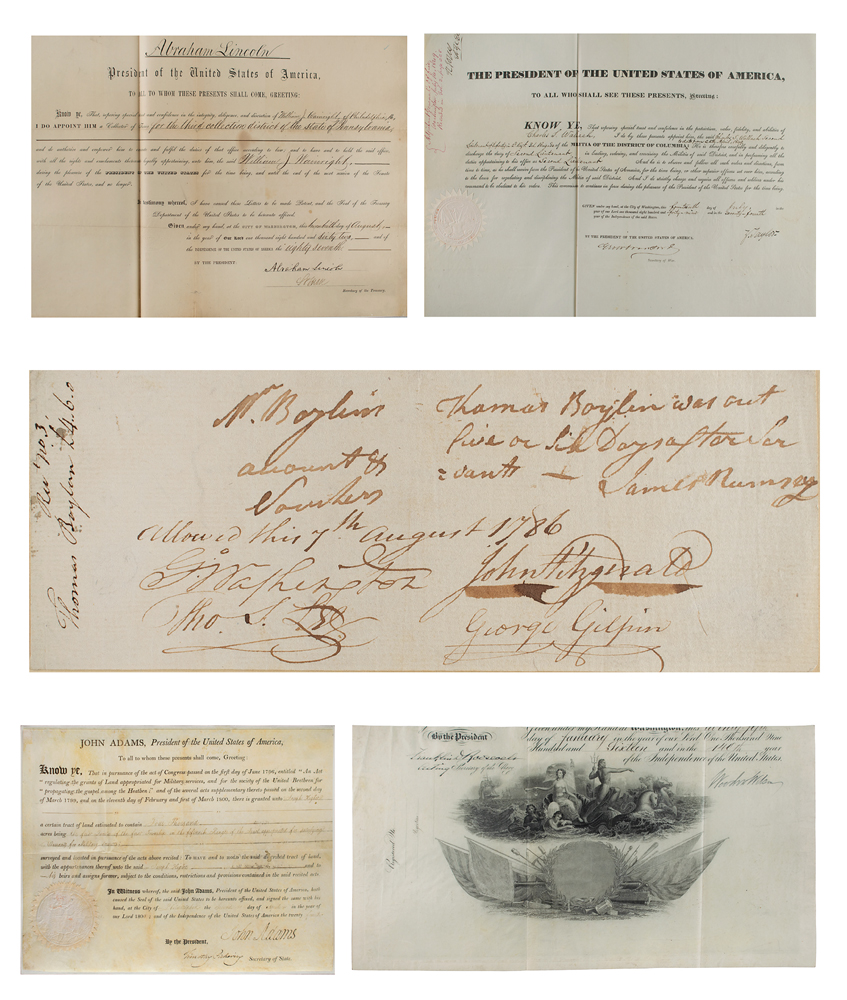 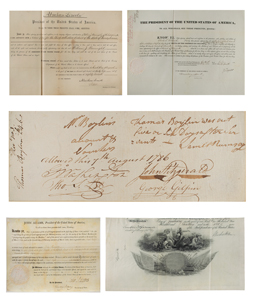 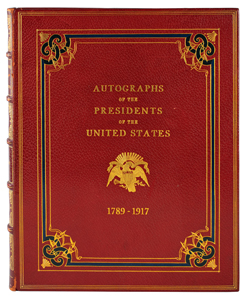 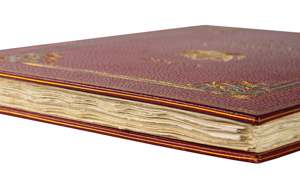 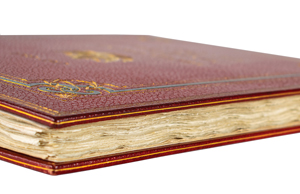 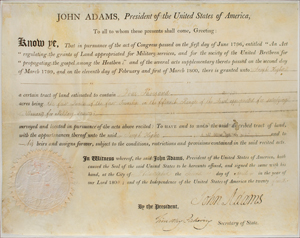 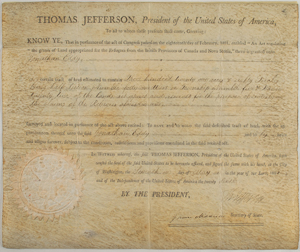 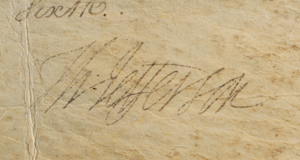 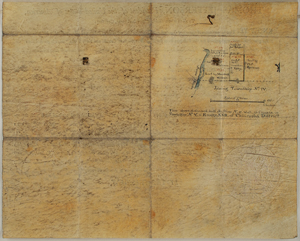 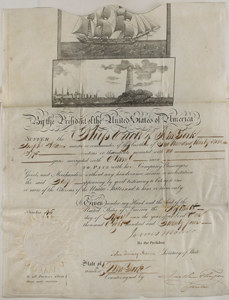 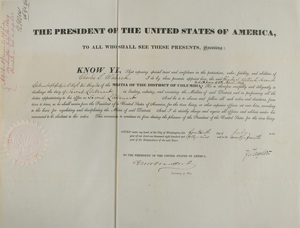 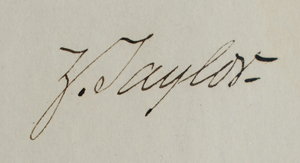 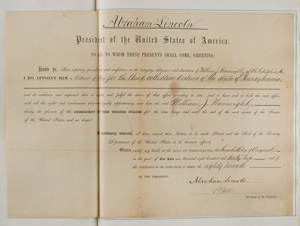 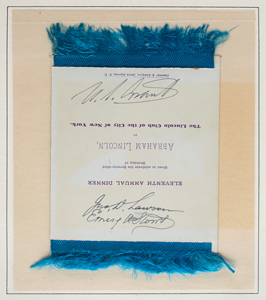 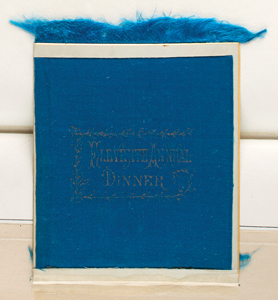 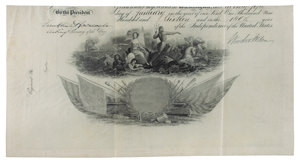 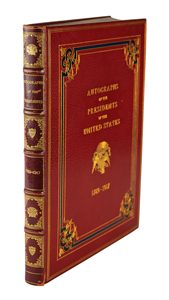 From Washington to Wilson, a presidential collection spanning over 130 years of American history

Exceptional collection of presidential autographs representing a complete set from George Washington through Woodrow Wilson, uniformly affixed by their left edges to large off-white sheets, and custom-bound into a beautiful red leather volume with slipcase, gilt-stamped titles, and a calligraphically embellished title page, each page preceded by a large engraving depicting the president. It should be noted that most of the larger documents have either been trimmed or feature at least one extra fold to accommodate the size constraints of the album.

Taken as a whole, this is an exceptionally appealing set of presidential autographs that represents many of young America’s most important and formative early chapters: a 1786 Washington document from his tenure with the enterprising Potomac Company concerning runaway slaves; President Adams in 1800 allots land to a soldier of the Revolution; two years later, President Jefferson and Secretary of State Madison reward land to a Canadian patriot for his role in the war; and in 1824, as president and state secretary, Monroe and John Quincy Adams assure the safe passage of a New York ship bound for long sea trade. These documents, and many more, are beautifully presented in a single, impressive leatherbound volume that was originally assembled by a bookbinder in 1910.

1. George Washington
Manuscript DS signed “Go: Washington,” one page, 7.25 x 2.75, August 7, 1786. A payment voucher from the Potomack Company issued to Thomas Boylan for £4.6.0, paid unto him “For Traveling Charges and horse hire for six days in pursuit of runaway servants.” Signed at the conclusion by Washington, and countersigned by Potomac Company representatives George Gilpin, Thomas Lee, and John Fitzgerald. Affixed by its left edge to a slightly larger backing sheet. In fine condition.

3. Thomas Jefferson and James Madison
Partly-printed vellum DS, signed “Th: Jefferson” as president and “James Madison” as secretary of state, one page, 11.5 x 9.5, May 7, 1802. Under the "Act regulating the grants of land appropriated for the refugees from the British Provinces of Canada and Nova Scotia," President Jefferson grants Jonathan Eddy “a certain tract of land estimated to contain Three hundred twenty one acres.” On the back is a precisely drawn and hand-colored map of the aforementioned tract of land. Signed at the conclusion by Thomas Jefferson and James Madison. Original embossed seal remains affixed to the lower left. In very good condition, with trimmed edges, light toning and overall soiling, and Jefferson’s signature a couple of shades light.

4. James Monroe and John Quincy Adams
Partly-printed vellum DS, signed “James Monroe” as president and “John Quincy Adams” as secretary of state, one page, 11.5 x 15, April 15, 1824. Scalloped-top ship's pass issued to the "Ship Earle of New York, Joseph Adams master or commander…navigated with Eleven men To Pass with her Company Passengers Goods and Merchandize without any hinderance seisure or molestation." The white paper seal remains affixed to the lower left. Signed at the conclusion by both Monroe and Adams, and countersigned by Jonathan Thompson as collector. In fine condition, with overall wrinkling and a small chip to the bottom edge.

6. Andrew Jackson
Partial partly-printed DS as president, one page, 10.25 x 10.75, June 23, 1835. Four-language ship's paper (trimmed to feature only English and Dutch) issued to "Charles C. Runell, master or commander of the Barque called Arab…bound for Pacific Ocean and laden with Provisions, Stores and Utensils for a whaling voyage." Prominently signed below by President Andrew Jackson and countersigned by Secretary of State John Forsyth. In fine condition.

7. Martin Van Buren
ALS signed “M. V. Buren,” one page, 5 x 7.75, no date. In full: “Our friend Alderman Strong of New York wishes to see you on business and I take great pleasure in introducing him to you as a gentleman entitled to your respect & confidence.” In fine condition, with restored paper loss to the bottom edge, slightly impinging on the first letter of the signature.

9. John Tyler
ALS as president, one black-bordered page, 4.5 x 7, [1842]. Letter to former U.S. Postmaster Francis Granger, in full: “Do me the favor to send any papers filed within the last two years, during the last administration in connection with the P.M. at Providence.” In fine condition.

10. James K. Polk
Partly-printed vellum DS as president, one page, 13.5 x 17, June 30, 1846. President Polk appoints James A. Hardie as a “Second Lieutenant in the Third Regiment of Artillery, in the service of the United States.” Signed at the conclusion by James. K. Polk and countersigned by Secretary of War William L. Marcy. The War Department seal remains affixed to the upper left. In fine condition.

11. Zachary Taylor
Partly-printed DS as president signed “Z. Taylor,” one page, 15.25 x 11.5, July 14, 1849. President Taylor appoints Charles S. Wallach as a “Second Lieutenant of Infantry in 2’d Reg’t 3d Brigade of the Militia of the District of Columbia.” Signed at the conclusion by Zachary Taylor and countersigned by Secretary of War George W. Crawford. The War Department seal remains affixed to the left side. In fine condition, with lightly trimmed edges. Given his short 16-month tenure in the White House, presidential autographs by Taylor are especially scarce.

12. Millard Fillmore
ALS, one page, 7.75 x 9.75, April 27, 1848. Written from Albany as the Comptroller of New York, a letter to H. C. Day, in part: “Among my papers you will find a Bond and Mortgage from Lloyd Slade to Mary Powers and an assignment of the same from her to me, and a note from Mary Powers to me, for the security of which the Bond and Mortgage were assigned to me. I wish you would enclose to me the Bond and Mortgage and assignment, and a copy of the note with my endorsement thereon. Please also to examine among my papers and see if you find a note there from William Slade to Mary Powers, and if you do, send me a copy if it.” In fine condition, with faint toning along folds.

13. Franklin Pierce
Partly-printed DS as president, one page, 7.75 x 10.5, December 14, 1855. President Pierce authorizes and directs the "Secretary of State to affix the Seal of the United States to the pardon granted to Peter O’Connor." Signed prominently at the conclusion by Pierce. In very good to fine condition, with two small, unobtrusive tears to Pierce’s first name, and light show-through from the small pieces of old repair tape on the back.

14. James Buchanan
Civil War-dated ALS, one page, 4.5 x 7, December 11, 1861. Brief letter to William Stockwell, in full: “In compliance with your request, I send you my autograph.” In fine condition, with light stains to the corners and top edge.

15. Abraham Lincoln
Civil War-dated partly-printed DS as president, one page, 15.5 x 11, August 20, 1862. President Lincoln appoints William J. Wainwright of Philadelphia as a “Collector of Taxes for the third collection district of the state of Pennsylvania.” Crisply signed at the conclusion by Abraham Lincoln, and countersigned by Secretary of the Treasury Salmon P. Chase. In very good to fine condition, with scattered stains, and small old reinforcements to fold intersections on the back. Lincoln’s signature is attractively crisp and bold.

17. U. S. Grant
Rare and very desirable invitation for the “Eleventh Annual Dinner, Given to celebrate the Seventy-third Birthday of Abraham Lincoln,” one page, 4.5 x 6.5, organized by the Lincoln Club of the City of New York on February 12, 1882. Signed upside down at the bottom by U. S. Grant. In fine condition, with some slightly irregular faint toning.

18. Rutherford B. Hayes
ALS signed “R. B. Hayes,” one page, 5.5 x 7.5, April 21, 1886. Letter marked “Personal,” in full: “It gives me pleasure to send you two copies of the Proceedings of our unveiling—more if you wish. The affair is not for sale. It is printed by the committee for protecting distribution.” In very good to fine condition, with restored paper loss to the bottom of the letter.

20. Chester A. Arthur
Partly-printed DS signed “C. A. Arthur” as the Collector of the Port of New York, one page, 8.5 x 9.5, May 1875. A Custom House receipt from Arthur showing “the distributive shares of Seizure No. 1050 accruing to us, respectively, in the matter of 14 1/20 boxes Cigars as per order of distribution No. 1021.” Signed prominently below by Arthur, and countersigned by George Sharpe and A. H. Laflin. In fine condition, with a trimmed bottom edge.

21. Grover Cleveland
TLS, one page, 8 x 10.5, February 20, 1904. Written from Princeton, a letter to Clara S. Ellis, in full: “I should be very glad to respond favorably to your letter of 10th inst, if I supposed I could contribute anything worthy of a place in your contemplated volume, or which would add anything to its value. Since, however, I have nothing in mind of that nature, at the present time, and would hardly know how to manufacture such matter, I trust you will excuse me from compliance with your suggestion.” In fine condition.

22. Benjamin Harrison
Partly-printed DS as president, signed “Benj. Harrison,” one page, 8 x 10, August 17, 1889. President Harrison authorizes and directs "the Secretary of State to cause the Seal of the United States to be affixed to the envelopes containing my letters to the Regents of Servia; George, King of Greece; Charles I King of Roumania, accrediting A. Loudon Snowden as Minister Resident and Consul General to those countries.” Signed boldly at the conclusion by Benjamin Harrison. In fine condition.

23. William McKinley
TLS signed “W. McKinley,” one page, 5.5 x 8.25, June 8, 1896, personal letterhead. Brief letter to Eugene T. Black, in full: “For your kind letter of the 6th. Inst. please accept my thanks.” In fine condition, with some faint toning, and a few small stains to the left edge.

24. Theodore Roosevelt
TLS signed “T. Roosevelt,” one page, 6.5 x 7.5, Oyster Bay letterhead, no date. In full: “I am sorry that I cannot accept your kind invitation; but at this time it is simply impossible for me to make another engagement.” In fine condition.

25. William H. Taft
TLS signed “Wm. H. Taft,” one page, 8 x 10, Department of Justice letterhead, April 2, 1891. Letter to Calderon Carlisle, in full: “I send you herewith, twenty copies of the return of Judge Bugbee in the Sayward case. I shall send the original to the Supreme Court to-day for filing, together with twenty-five printed copies.” In fine condition, with light blurring to the type, and heavier blurring to the signature.

26. Woodrow Wilson and Franklin D. Roosevelt
Lower portion of a partly-printed vellum DS signed “Woodrow Wilson” as president and “Franklin D. Roosevelt” as acting secretary of the Navy, one page, trimmed to 15.5 x 8, January 25, 1916. Navy Department seal missing from lower vignette. The document is no longer affixed to the album sheet. In fine condition.

The handsome album itself is in fine condition, with only some small areas of rubbing to the spine. Its slipcase has minor edge rubbing, some trivial fraying, a few scratches, and an area of surface loss to the back.