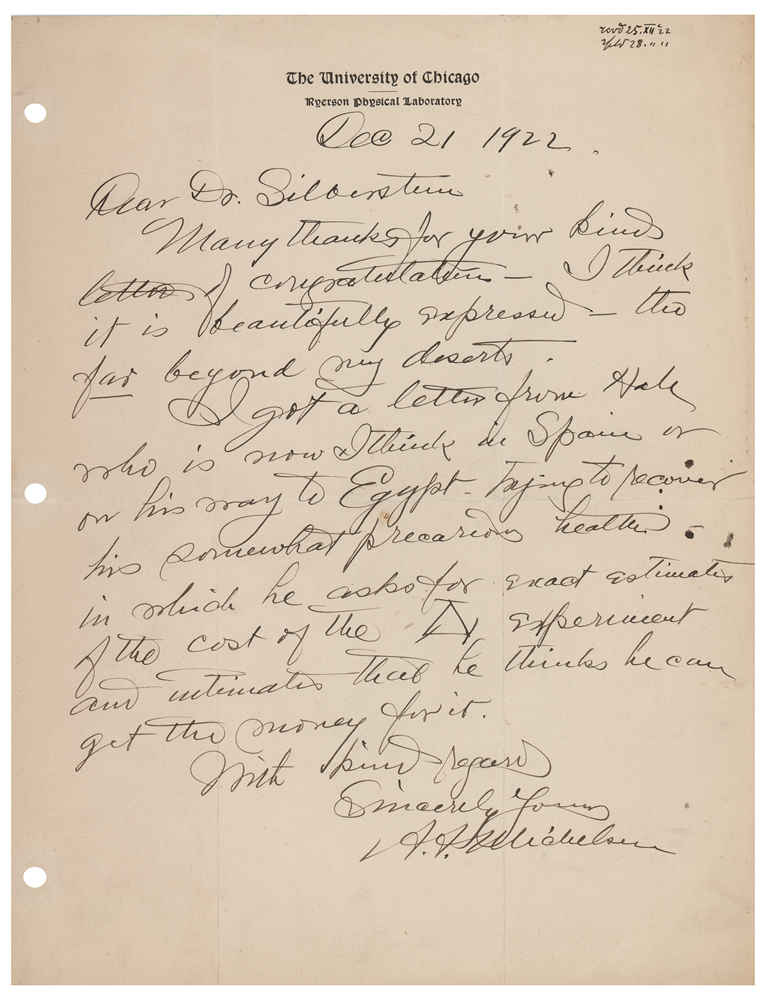 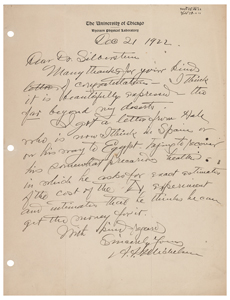 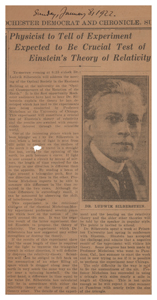 Physicist known for his work on measuring the speed of light (1852-1931) who, in 1907, became the first American scientist to win a Nobel Prize. He played a crucial role in the history of relativity, having performed one of its most famous experiments in 1887. ALS signed “A. A. Michelson,” one page, 8.25 x 10.75, University of Chicago, Ryerson Physical Laboratory letterhead, December 21, 1922. Handwritten letter to Dr. Ludwik Silberstein, referencing influential solar astronomer George Ellery Hale and a proposed ether-drift experiment. In full: "Many thanks for your kind letter of congratulations—I think it is beautifully expressed—tho far beyond my deserts. I got a letter from Hale who is now I think in Spain or on his way to Egypt, trying to recover his somewhat precarious health, in which he asks for exact estimates of the cost of the [interferometer sketch] experiment and intimates that he thinks he can get the money for it." Silberstein notes the dates of receipt and reply in the upper right corner. In fine condition. Accompanied by a contemporary newspaper clipping describing Silberstein's attempts, with Michelson, to experimentally prove or disprove Einstein's theory of relativity.

Fascinated by light, and, in particular, the measurement—to greater and greater accuracy—of its velocity 'in vacuo,' Michelson was also interested in measuring the change in its speed as it passed through various refractive media. To this end he invented a highly precise instrument, the 'Michelson interferometer.' But the interferometer could have other uses.

Consider this pre-relativity picture: the Earth, in its journey around the Sun, is traveling through the fixed ether, with respect to which light travels with velocity c. At the Earth’s surface there is an 'ether wind,' just as there is an apparent wind felt by the window of a moving car. It is easy to show that two light beams, one traveling parallel to the ether wind and the other perpendicular, take different times to cover the same distance, L. Measurement of extremely small time-differences like this was just what his interferometer had been designed to do. And so, in 1887 he and his colleague Edward Morley performed the Michelson-Morley experiment.

It found nothing. The two light beams, to the limits of the apparatus’s measuring ability, took precisely the same time. It was a shocking result. Where was the ether wind?

There were many ad hoc explanations—for example, perhaps the leg of the interferometer parallel to the wind was compressed by an 'ether pressure,' shortening it by precisely the amount necessary to ensure equal times. But the simplest, most fundamental, and most revolutionary explanation was Einstein’s: there was no ether wind because there was no ether.

Still, Silberstein remained a firm believer in the ether, even as the rest of the physics community passed him by. This letter—complete with a little drawing of a three-legged interferometer—mentions a new experiment, designed by Silberstein, which Michelson was planning to perform. As explained in the included news clipping, a null result here would be inconsistent with relativity.