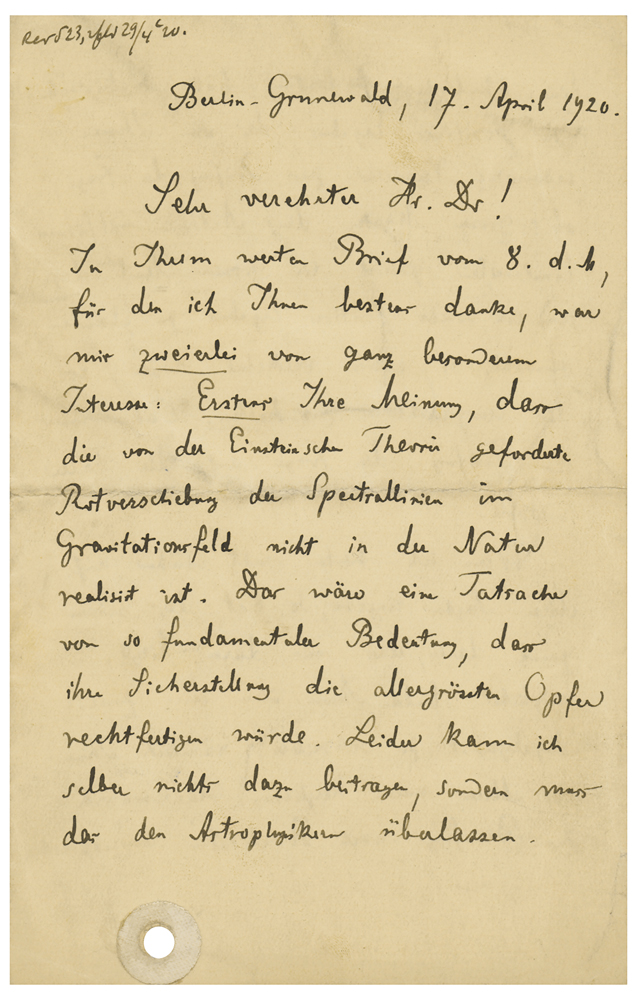 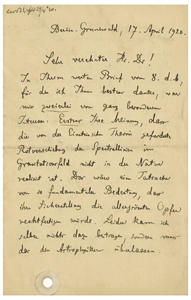 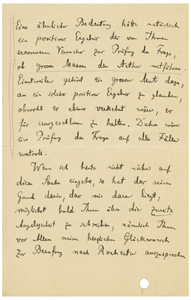 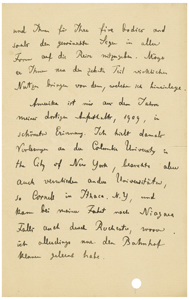 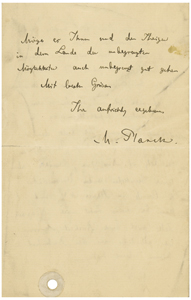 ALS in German, signed “M. Planck,” four pages on two adjoining sheets, 4.5 x 7, April 17, 1920. Handwritten letter to Dr. Ludwik Silberstein, who clings to the ether theory in the face of all evidence to the contrary. Planck responds to his continued claim that Einstein’s gravitational red shift—the changing of frequency of 'falling' light—does not exist, and that Einstein’s other predictions can be explained by the 'ether dragging' of the Earth. Planck will not discount it, but it is plain that his thoughts are now aligned with Einstein’s—a point he made in his previous letter.

In part (translated): "In your valued letter...two things were of quite particular interest to me: first, your opinion that the red shift of the spectral lines in the gravitational field called for by the Einstein theory is not seen in nature. That would be a fact of such fundamental significance that establishing it would justify the greatest of sacrifices. Unfortunately, I can contribute nothing to that effort myself but must leave it to the astrophysicists.

A positive result from your idea of attempting to examine the question of whether large masses carry the ether with them would naturally have a similar significance. For the time being, it takes great daring to believe in such a positive result, although it would be just as distorted to consider it excluded. For this reason, an examination of the question would be valuable in any case."

Congratulating Silberstein on his new position with Eastman Kodak, Planck fondly remembers his visit to America: “It is important to me to write to you as soon as possible about the second matter, namely to express to you first and foremost my sincere congratulations on the position in Rochester and to send with you on your trip the desired blessing in due form for your 'five bodies and souls.' May it bring you just a tenth of what I put into it in real benefit.

I have the most beautiful memories of America from the year I spent there, 1909. At the time, I was lecturing at Columbia University in the City of New York, but I also visited various other universities, such as Cornell in Ithaca, N.Y., and on my trip to Niagara Falls I also passed through Rochester, although I only saw the train station. May you and yours find unlimited good fortune in the land of unlimited possibilities.” Silberstein notes the dates of receipt and reply at the top. In very good to fine condition, with light creases and staining, tiny edge splits, and reinforced filing holes to the bottom.