After commenting on his Nobel Prize, Planck mourns the loss of a daughter and an international length standard: "However much every patriot feels the moral duty to take action on behalf of his fatherland’s interests, national egoism still finds a limit in respect for such goods as serve supranational goals" 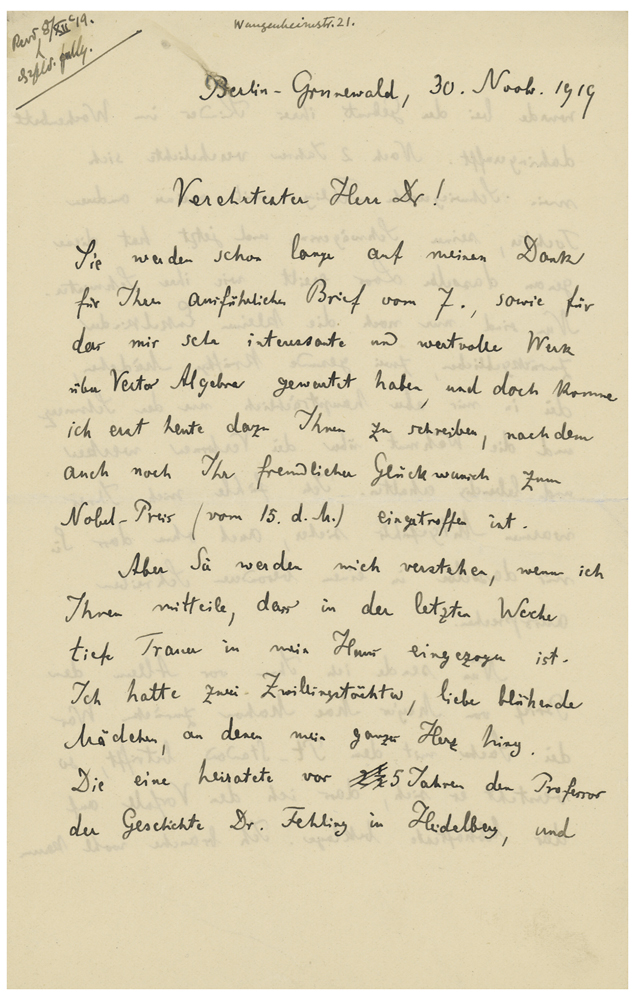 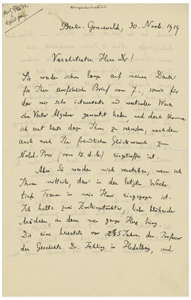 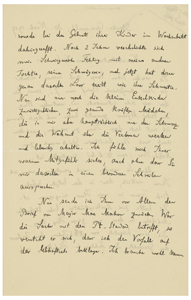 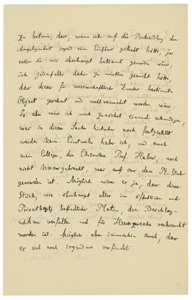 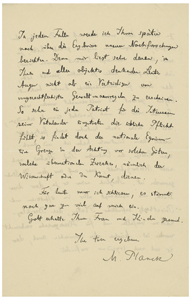 After commenting on his Nobel Prize, Planck mourns the loss of a daughter and an international length standard: "However much every patriot feels the moral duty to take action on behalf of his fatherland’s interests, national egoism still finds a limit in respect for such goods as serve supranational goals"

ALS in German, signed “M. Planck,” four pages on two adjoining sheets, 5.5 x 8.5, November 30, 1919. Handwritten letter to Dr. Ludwik Silberstein. In full (translated): "You will have been waiting a long time already for my thanks for your detailed letter of the 7th, as well as for the work on vector algebra, very interesting and valuable to me, and yet I am only getting to writing to you today, after having also received your friendly congratulations on the Nobel Prize (of the 15th of this month). But you will understand me when I tell you that deep sadness has taken up residence in my house in the last week. I had two twin daughters, dear blooming girls, who were the joy of my whole heart. One married the history professor Dr. Fehling in Heidelberg 5 years ago and was snatched away in childbed upon the birth of her child. My son-in-law Fehling married my other daughter, his sister-in-law, 2 years later, and now she has been overtaken by exactly the same fate as her sister. Now only the little grandchildren are left, two healthy, strong girls who nonetheless chiefly arouse and keep alive in me grief and melancholy about those lost. I feel certain of your warm sympathy, even without your expressing it to me in a special letter.

Now, first and foremost, I am sending you Major MacMahon’s letter back. Where the matter of the Pt standard is concerned, it goes without saying that I regret the incident most deeply. I probably scarcely need to emphasize that, if I had had any influence on the handling of the affair, if I had even known about it at all, I would in any event have attempted to bring it about that this object, intended for scientific purposes, was protected and taken good care of. As it is, however, I must first of all find out what can still be established after the fact in this matter. For the time being, I and my colleague, the chemist Prof. Haber, have not yet unearthed what has become of the Pt rod. It is of course possible that this object, like any and all publicly and privately owned platinum, was confiscated and used for military purposes. It is also still possible, however, that it will yet turn up somewhere.

In any case, I will report to you later about the results of our inquiries. It matters a great deal to me not to appear in your eyes and those of all objectively thinking people as a defender of unjustified expedients of force. However much every patriot feels the moral duty to take action on behalf of his fatherland’s interests, national egoism still finds a limit in respect for such goods as serve supranational goals, namely science or art. I must conclude for today; there are still far too many storms breaking in on me. May God keep your wife and children in health." Silberstein notes the dates of receipt and reply at the top. In fine condition, with slight running to ink at the top of the first page.

Planck was awarded the 1918 Nobel Prize in Physics in 1919 (as a ‘reserved’ prize awarded after no recipient was selected the previous year), in ‘recognition of the services he rendered to the advancement of Physics by his discovery of energy quanta.’ After thanking Silberstein for a congratulatory note, he details his recent personal tragedy—the death in childbirth of his second twin daughter, Emma—and ponders the disappearance of a platinum rod, evidently a length standard defining the meter. In 1889, the International Bureau of Weights and Measures distributed 'National Prototype Metre Bars’ to thirty nations to define the international standard; Planck seems to suspect that Germany’s bar (no. 18) had been confiscated and used for war materiel.