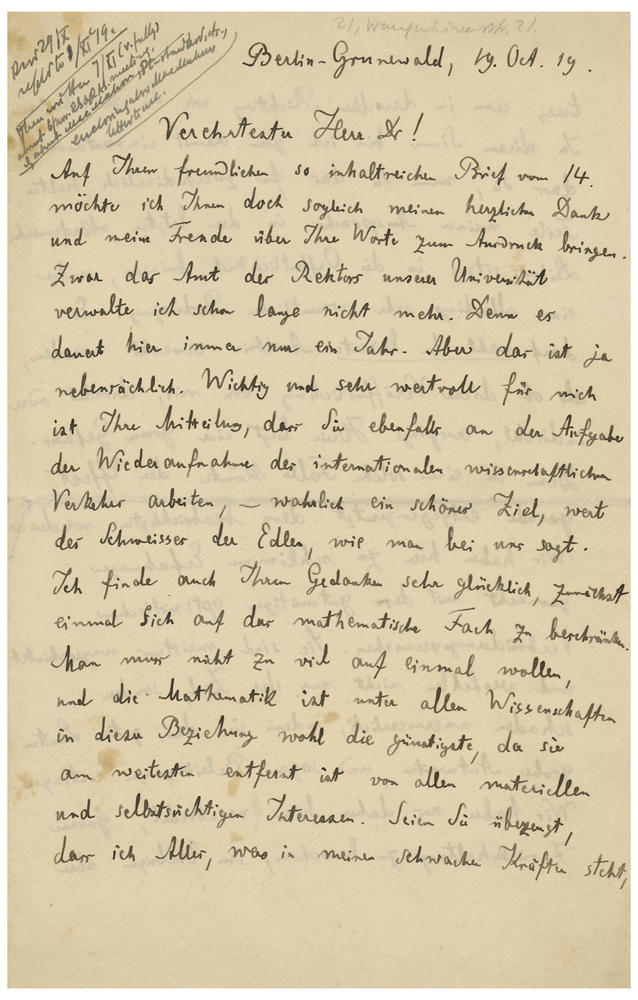 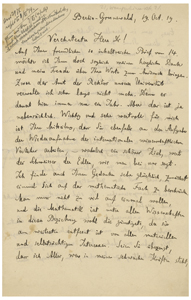 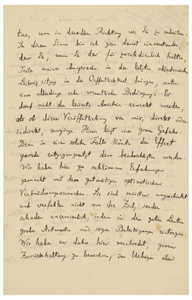 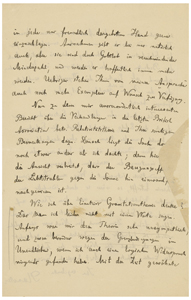 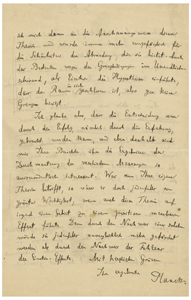 ALS in German, signed “Planck,” four pages on two adjoining sheets, 5.5 x 8.5, October 19, 1919. Handwritten letter to Dr. Ludwik Silberstein, commenting on the plausibility of Einstein's theory of gravitation. Planck opens by congratulating Silberstein for his work towards renewing "international scientific exchange," the backbone of scientific progress stymied by World War I—"a beautiful goal, worth the sweat of noble brows.” He holds that "out of all the sciences, mathematics is probably the best suited in this regard, since it is the furthest removed from all material and selfish interests."

Planck then comments on the just-held 1919 meeting of the British Association for the Advancement of Science, at which Eddington announced his eclipse results, and expresses his new-found belief in Einstein’s gravity: "Now to the report, extraordinarily interesting to me, about the proceedings at the most recent British Association concerning relativity theory and your other comments in that regard. According to this, the situation there is still somewhat different from what I thought, for here the view is widespread that the motion effect on the light rays with respect to the sun has been proved beyond objection.

What do I think about Einstein’s theory of gravitation? Unfortunately, I cannot say in one word. At the beginning, I was very unsympathetic to this theory, especially on account of the boundary conditions at infinity, even if I did not find a logical contradiction anywhere. With time, I then got used to this theory’s way of looking at things and became ever more receptive to the beauties of the perfection that it offers. Even the concern about the boundary conditions at infinity disappeared when Einstein introduced the hypothesis that space is enclosed in itself, hence has no boundaries at all.

So I believe that the decision can come about only through success, namely through experience, and precisely for this reason, your reports on the results of the scrutiny of the various measurements are so extraordinarily interesting to me."

Einstein had predicted two possible outcomes for Eddington's observations—a 'half-deflection' which Newton’s theory could explain, and a full, completely relativistic one. The conference report stated that 'the observation had been partially vitiated by the presence of clouds, but the plates already measured indicated the existence of a deflection intermediate between the two theoretically possible values.' The results were still under great scrutiny by British physicists and astronomers. Sadly, the lack of national bias had not yet returned to the scientific community.

He ends with polite though damning criticism of Silberstein’s alternative ether theory: “Now, where your own theory is concerned, it would…be of the greatest importance if [it] also led to a positive, measurable effect in any area. It would in any event be furthered incomparably by the proof of such an effect than by the proof of the absence of the Einstein effects." Silberstein notes the dates of receipt and reply at the top. In very good to fine condition, with a few light stains, one edge tear, and some adhesive remnants affecting a few words of the text.