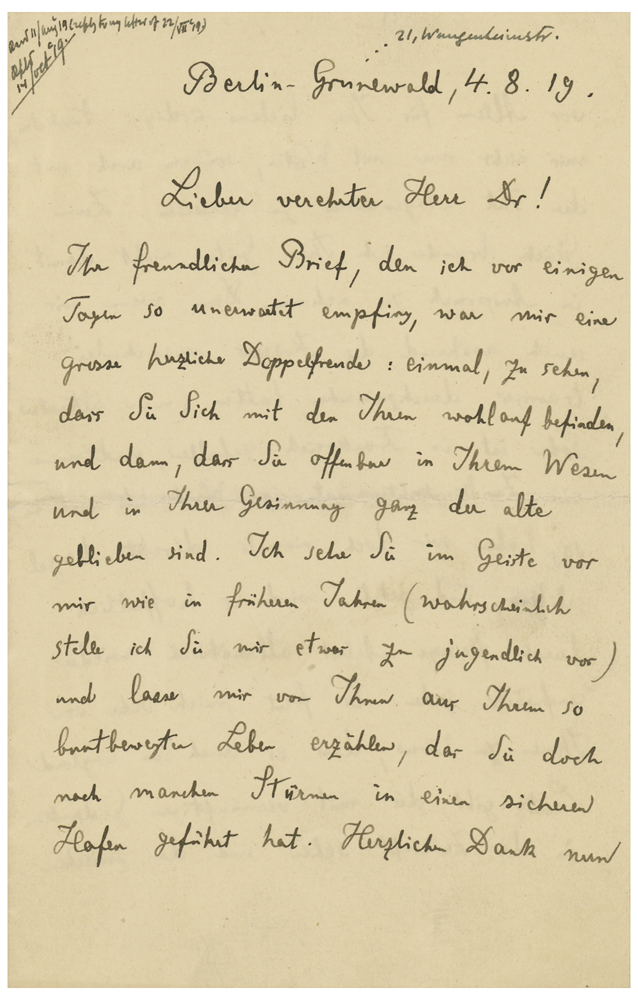 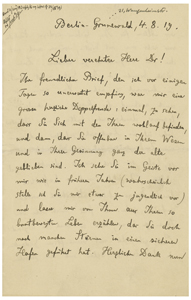 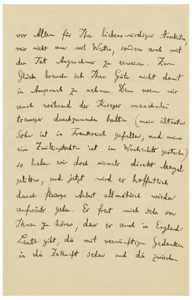 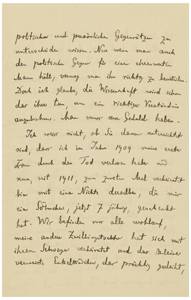 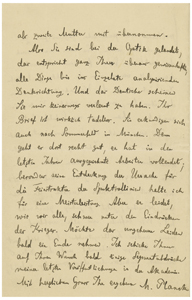 ALS in German, signed “M. Planck,” four pages on two adjoining sheets, 4.5 x 7, August 4, 1919. Handwritten letter to Dr. Ludwik Silberstein. In full (translated): "Your friendly letter, which I received so unexpectedly a few days ago, was a great, heartfelt double joy to me: for one thing, to see that you and yours are well, and then that you have evidently remained entirely as of old in your character and disposition. I see you in spirit before me as in earlier years (probably I am imagining you somewhat too youthfully), and I let you tell me about your so varied life, which has yet brought you to a safe harbor after many storms. Sincere thanks now above all for your amiable offer to do me kindness not only in word but also in deed. Fortunately, I do not need to make such demands on your goodness. Even if we had to endure many kinds of sadness during the war (my oldest son fell in France, and one of my twin daughters died in childbed), we have still never directly suffered lack, and now, hopefully, things will gradually start to move forward again with diligent work. I am very happy to hear from you that there are also people in England who are looking toward the future with rational ideas and know how to distinguish between political and personal antagonisms. Only if one considers even a political opponent as an honorable man is one able to judge him correctly. Still, I believe that science will soon do its part to pave the way for a proper understanding. One must only have patience.

I do not know whether you are aware that I lost my first wife to death in 1909 and am now married for the second time, since 1911, to a niece of hers, who has given me a little son, now 7 years old. We are all well; my other twin daughter has married her brother-in-law and at the same time taken on the little orphaned grandchild, who is thriving splendidly, as a second mother.

So you have ended up in optics; that fully corresponds to your exceedingly conscientious way of thinking, analyzing each thing down to the smallest details. And you do not seem to me to have forgotten your German in the least. Your letter is really beyond reproach. You also ask for news of Sommerfeld in Munich. Things are going quite well for him there; he has completed excellent papers in recent years, and in particular, I consider his discovery of the cause of the fine structure of the spectral lines a masterwork. But like all of us, he is suffering severely under the impressions of the war. May the frightful suffering soon come to an end! If you wish, I will send you some offprints of my most recent publications with the Academy soon." Silberstein notes the dates of receipt and reply at the top. In fine condition.

In this significant autobiographical letter, Planck catches Silberstein up on some of the goings-on in his personal life, which was marred by tragedy in the World War I era: after the death of his first wife in 1909, his son Erwin was taken prisoner by the French in 1914, his son Karl was killed in action at Verdun in 1916, and his beloved daughter Grete died in childbirth. Her twin sister, Emma, married her widower, took in the orphaned child, and was “thriving splendidly," but she too would die in childbirth later on in 1919. Although Erwin survived, he would be executed during World War II as a conspirator in the 20 July Plot, Claus von Stauffenberg's attempt to assassinate Hitler.

Planck, a staunchly patriotic German, had been a signatory to the infamous 'Manifesto of the Ninety-Three,’ a 1914 proclamation in which prominent German scientists, scholars, and artists declared their unequivocal support of German military actions in the early period of World War I. This helped to solidify support for the war amongst the intellectual class. However, Planck’s principal focus was physics, not politics. By 1916, he had moderated his views, and went semi-public with his regret about having signed the manifesto. Writing after war’s end, he looks forward to renewed cooperation among the international scientific community and hopes that science will “pave the way for a proper understanding” between peoples.