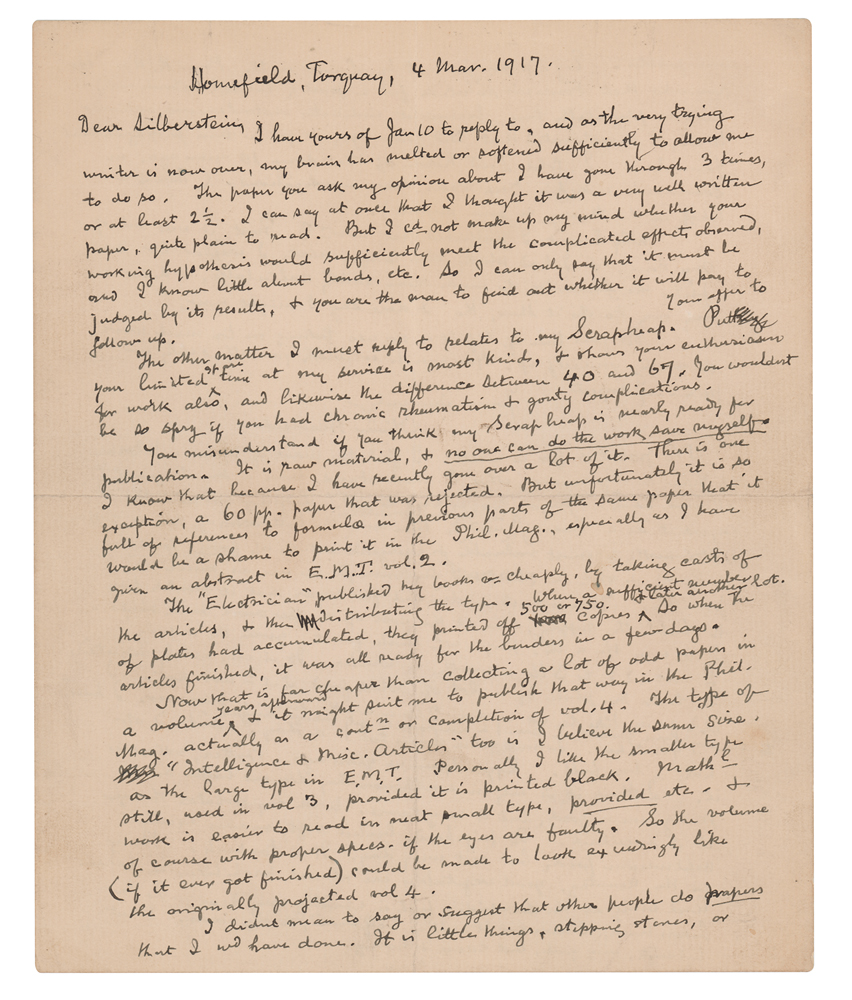 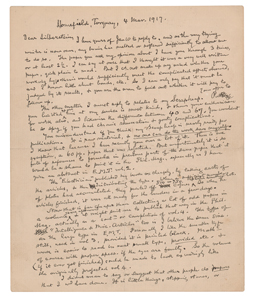 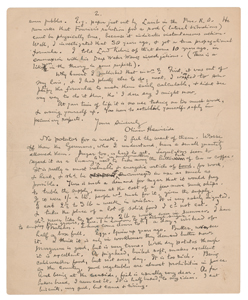 English autodidactic electrical engineer, mathematician, and physicist (1850-1925) who brought complex numbers to circuit analysis, invented a new technique for solving differential equations, independently developed vector calculus, and rewrote Maxwell's equations in the form commonly used today. Reclusive and often at odds with the scientific establishment, Heaviside nevertheless changed the face of telecommunications, mathematics, and science. ALS, one page both sides, 6.5 x 8, March 4, 1917. Handwritten letter to Dr. Ludwik Silberstein, concerning papers by them both. In part: "The paper you ask my opinion about I have gone through 3 times, or at least 2 1/2. I can say at once that I thought it was a very well written paper, quite plain to read. But I c'd not make up my mind whether your working hypothesis would sufficiently meet the complicated effects observed, and I know little about bonds, etc. So I can only say that it must be judged by its results, & you are the man to find out whether it will pay to follow up. The other matter I must reply to relates to my Scrapheap. Your offer to put your limited spare time at my service is most kind, & shows your enthusiasm for work also, and likewise the difference between 40 and 67. You wouldn't be so spry if you had chronic rheumatism & gouty complications. You misunderstand if you think my Scrapheap is nearly ready for publication. It is raw material, & no one can do the work save myself. I know that because I have recently gone over a lot of it. There is one exception, a 60 pp. paper that was rejected. But unfortunately it is so full of references to formula in previous parts of the same paper that it would be a shame to print it in the Phil. Mag., especially as I have given an abstract in E.M.T. vol. 2…I didn't mean to say or suggest that other people do papers that I w'd have done. It is little things, stepping stones, or even pebbles. E.g. paper just out by Lamb…He remarks that Fournier's solution for a rod (lateral vibrations) can't be physically true, because it indicates instantaneous action. Well, I investigated that 30 years ago, & got a true propagational formula. I told Lord Kelvin of that some 10 years ago, in connexion with his Deep Water-Wave investigations. (There is a likeness in the theory in some respects). Why haven't I published…First, it was out of my line, & I had plenty else to do; next, I wanted to simplify the formula to make them easily calculable, & didn't see any way to do it then, tho' I dare say I might now." He also discusses some issues of typesetting, and in a postscript describes his diet amidst food shortages during World War I. In fine condition.

This letter is referenced in Paul J. Nahin's Oliver Heaviside: The Life, Work, and Times of an Electrical Genius of the Victorian Age (p. 286), in a discussion of the 'mysterious' unpublished fourth volume of Heaviside's Electromagnetic Theory (E.M.T.). Heaviside's autograph is exceedingly rare—we find no records of any having been publicly offered for sale in the past.