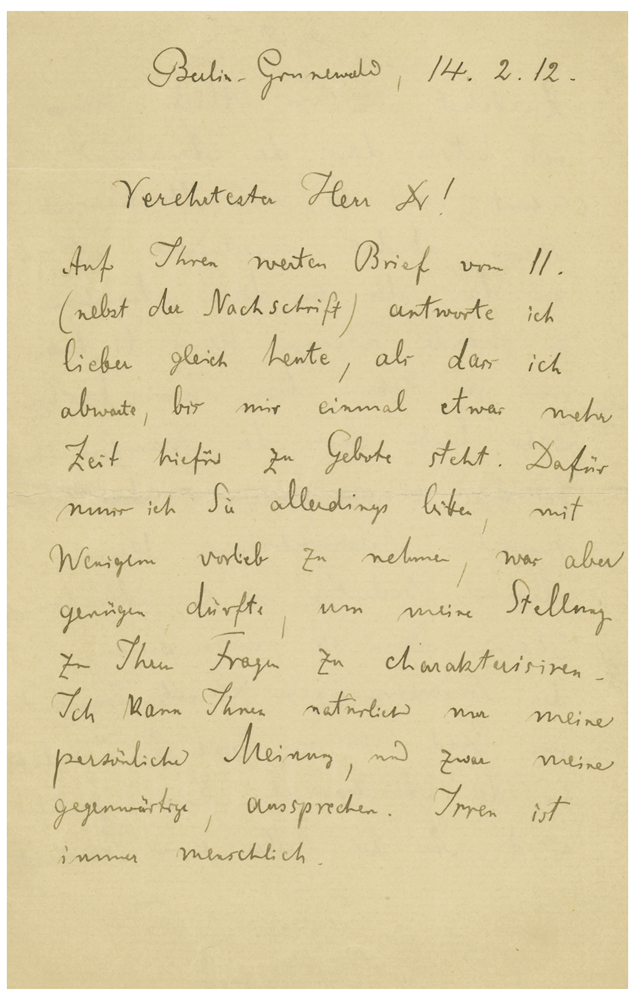 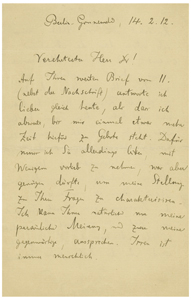 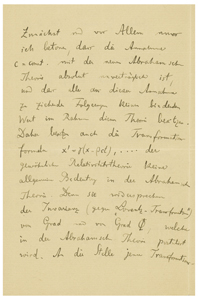 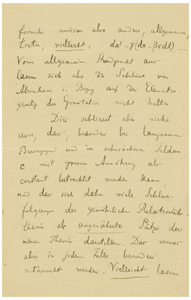 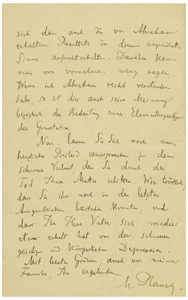 ALS in German, signed “M. Planck,” four pages on two adjoining sheets, 4.5 x 7, February 14, 1912. Handwritten letter to Dr. Ludwik Silberstein, discussing his former Ph.D. student Max Abraham’s 1912 theory of gravitation—a precursor to Einstein’s general theory of relativity, the theory of gravity as spacetime geometry. In part (translated): "I would rather answer your valued letter (along with the postscript) of the 11th right away today than wait until at some point I have somewhat more time at my disposal to do so. However, I have to ask you in exchange to make do with a little, which should nonetheless be enough to characterize my position in relation to your question. Naturally, I can only give you my personal opinion, and indeed my current one. To err is always human.

First and above all, I have to emphasize that the assumption c = constant is absolutely incompatible with the new Abraham theory, and that all consequences to be drawn from this assumption have no binding value within the framework of this theory. The transformation formulas x'=γ(x-βct),....of the usual theory of relativity therefore also have no general significance in the Abraham theory. They contradict invariance (with respect to 'Lorentz transformation') of degree and of degree Φ, which is postulated in the Abraham theory. The place of those transformation formulas, therefore, must be taken by other, more general ones, perhaps dx'=γ(dx-βcdt),...From a general perspective, therefore, Abraham’s conclusions cannot be maintained in connection with the elementary law of gravitation.

However, this does not exclude the possibility that, especially in the case of slow movements and in weak fields, c can be considered as constant to a high degree of approximation, and consequently that many conclusions of the usual theory of relativity appear as approximate theorems of the new theory. This must nevertheless be specially investigated in every case. Perhaps the results obtained by Abraham can then also be upheld in this approximated sense. Little can be said about this in advance. If I have understood Abraham correctly, this is also his opinion with regard to the significance of his elementary law of gravitation.

Now, permit me in addition to express my sincere sympathy for the great loss you have suffered in the death of your mother. What a comfort that you were able to be with her even in her last moments, and that your father has recovered somewhat from his severe spiritual and bodily depression!" In fine condition, with partial edge splitting to central horizontal fold.

Einstein had a deep belief in the underlying symmetries of the universe. The laws of physics, he felt, should have the same mathematical form for all observers. Restricting this “invariance” requirement to 'inertial' observers—those undergoing unaccelerated relative motion—led to special relativity. Dropping the restriction, and insisting upon invariance for all observers leads to general relativity.

The equations of mechanics, Newton’s Laws, are invariant under one set of equations, known as the Galilean transformations, while the laws of electricity and magnetism, Maxwell’s Equations—which predict the same value for the speed of light as measured by any inertial observer—maintained their form under a different set, the Lorentz transformations. Special relativity, with all its experimentally verified predictions, followed from the simple expedient of modifying the rules of mechanics so that they, too, are 'Lorentz invariant.'

A fundamental postulate of relativity is the constancy of the speed of light for all observers, a situation ensured by the Lorentz transformations. Max Abraham was a staunch opponent of relativity, and his gravitational theory contained a varying velocity of light; hence it was not Lorentz invariant. That is the aspect of the theory which Planck discusses here.