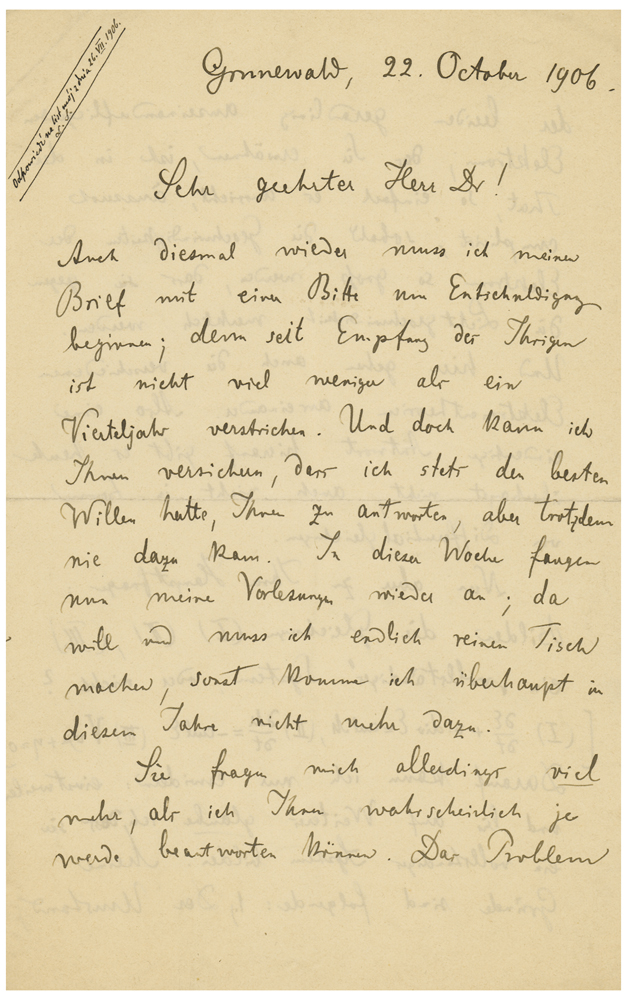 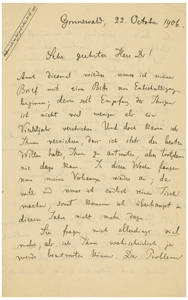 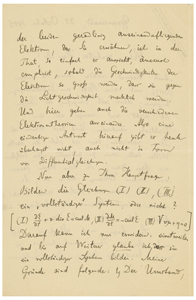 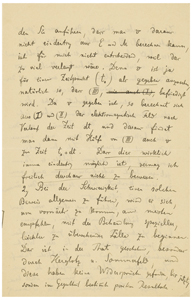 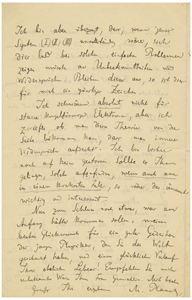 ALS in German, signed “M. Planck,” four pages on two adjoining sheets, 5.5 x 8.5, October 22, 1906. Handwritten letter to Dr. Ludwik Silberstein on electron theory, touching on the yet new and hardly generally accepted theory of special relativity. In part: "You ask me much more than I will probably ever be able to answer you. The problem that you mention of the two electrons flying away from each other in a straight line, however simple it appears, is in fact extremely complicated as soon as the velocities of the electrons become high enough to be noticeable in comparison to the speed of light. And here the different electron theories also diverge from one another. Consequently, there is simply not an unequivocal answer to this today, not even in the form of differential equations. But now to your main question: do the equations (I), (II), (III) form a “complete” system or not?...To this I can only reply that for the time being and until further notice I believe that they form a complete system...In view of the difficulty of working out such a proof in general terms, what will be most advisable, in order to be able to move forward, is to begin by treating special cases of which it is easy to get an overall view. This has in fact been done, especially by Herglotz and Sommerfeld, and they have found no contradictions up to now, but rather on the contrary, decidedly positive results...

I am absolutely not an enthusiast of rigid, spherical electrons, but I am doubtful whether this theory can be gotten around by uncovering internal contradictions in it. I have so far not come across any. If you should succeed in finding such, even if only in one concrete case, that would be extremely important and interesting. Now to conclude, one more thing that should have come at the beginning: my best good wishes for the thriving of the young physicist whom you have given the world, and for a happy course of your married life!" Silberstein writes and initials a note in the upper left corner. In fine condition.

Silberstein and Planck are considering a situation in which two electrons fly away from each other along a straight line, due to their mutual electromagnetic repulsion. A simple enough problem, Planck says, although one which “is in fact extremely complicated as soon as the velocities of the electrons become high enough to be noticeable in comparison to the speed of light.” That is because different physicists—in particular H.A. Lorentz (see lots 4023 and 4024), Max Abraham, and indeed Einstein himself in his theory of relativity—had treated the electron’s interaction with its own electric field in different ways. These are the “different electron theories” Planck mentions. Both Abraham and Lorentz maintained the existence of the all-pervading 'luminiferous ether,' a pre-relativity notion which Einstein, revolutionarily, completely did away with.

Each theory predicted that as the electron’s velocity increased, so too would its mass. But the mechanism behind the increase differed. Most notably, Einstein’s theory predicted a velocity dependence of all masses completely independent of electromagnetic interactions.

Planck then discusses in some detail a set of equations pertaining to the problem, trying to determine whether they are complete—that is, whether they completely describe the situation at hand. Planck finally states that he is “absolutely not an enthusiast of rigid spherical electrons,” but he himself cannot discover any internal contradictions that would disprove the model.