Planck responds to "objections to the electron theory" 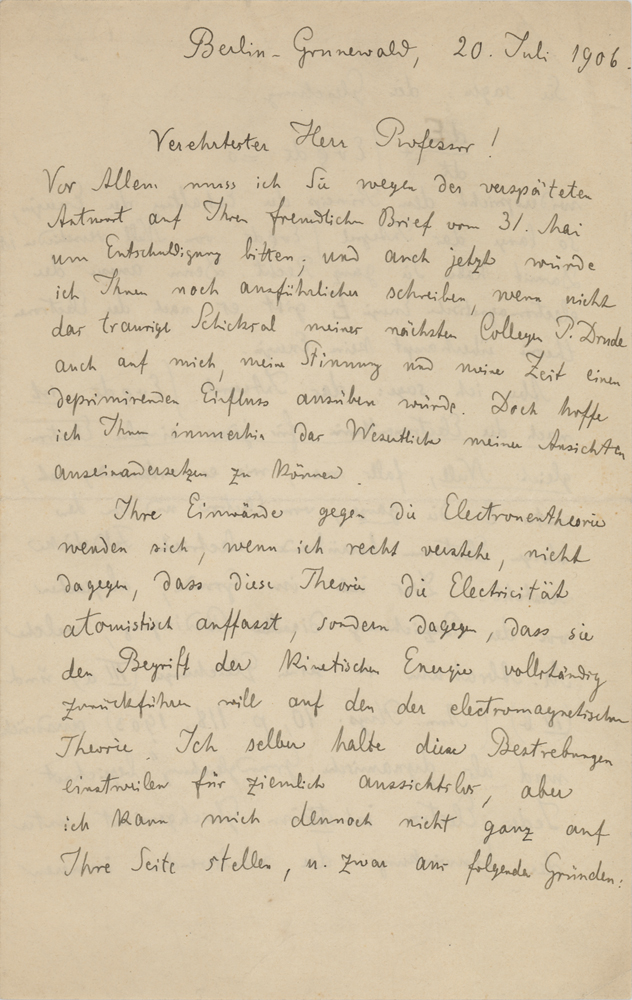 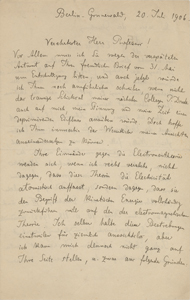 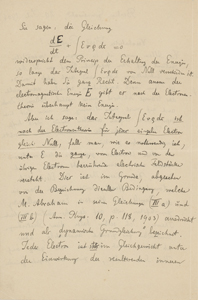 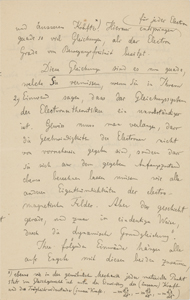 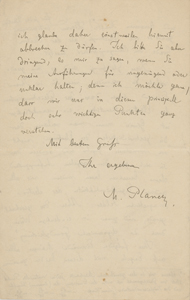 Planck responds to "objections to the electron theory"

Important ALS in German, signed “M. Planck,” four pages on two adjoining sheets, 5.5 x 8.5, July 20, 1906. Handwritten letter to Dr. Ludwik Silberstein on electron theory, controversial at the time as a microscopic theory of electricity. Silberstein does not believe in electron theory and produces an equation that seems to show that the fundamental physical principle of conservation of energy is violated. Planck points out that another physicist, Max Abraham, has published a paper in which he showed that the offending term in that equation is always equal to zero.

In part (translated): "Before anything else, I have to ask your forgiveness for the delayed answer to your friendly letter of 31 May, and even now I would still write to you at greater length if the sad fate of my close colleague P. Drude did not also have a depressing influence on me, my mood, and my time. Nevertheless, I hope even so to be able to lay out for you the essence of my views. Your objections to the electron theory, if I understand correctly, are not directed at the fact that this theory takes an atomistic approach to electricity, but rather at the fact that it seeks to trace the concept of kinetic energy completely back to the electromagnetic theory’s concept. I myself consider these efforts quite hopeless for the time being, but I nevertheless cannot entirely take your side...You say that the equation...contradicts the principle of conservation of energy as long as the integral ∫εvp dt is different from zero. In this, you are entirely correct. Except for the Electromagnetic energy E, there is no energy at all according to the electron theory. But I say that the integral ∫εvp dt is equal to zero for every individual electron according to the electron theory, in the case that, as is necessary, one understands under ε the entire electrical field strength originating from the electron and from the other electrons. At base, leaving aside the designation of the same condition, this is what M. Abraham expresses in his equations (IIIa) and (IIIb) (Ann. Phys. 10, p. 118, 1903) and calls a 'dynamic fundamental equation.' Each electron is always in equilibrium under the influence of the resulting internal and external forces. This gives rise to exactly as many equations for each electron as the electron has degrees of freedom of movement." In fine condition.

In 1897, J.J. Thomson (see lot 4019) had shown that 'cathode rays,' a popular subject of investigation, were comprised of tiny particles—later to be called 'electrons'—having a mass about 2000 times smaller than the mass of hydrogen, the lightest atom. Subatomic particles had been discovered.

In 1881, Thomson showed that an electron, modeled as a uniformly charged, extremely small spherical particle, was harder to accelerate than an uncharged sphere. This meant, according to Newton’s Laws of Motion, that the charged sphere had a greater mass than the uncharged sphere, even if they were otherwise identical. This extra mass came from the charged electron’s interaction with its own electric field. Could all the electron’s mass be due to this 'self-interaction'? Some physicists thought so. Silberstein thought not. Neither did Planck, but not for the same reasons, as he expresses in detail here.

Planck opens this letter apologizing for his delay in replying, which he attributes to the “sad fate” of his friend and fellow physicist Paul Drude. Drude, the editor of Annalen der Physik—a post that Planck would later hold—had for no apparent reason committed suicide two weeks before. An interesting letter, as it deals with Silberstein’s objections to, and Planck’s thoughts on, “electron theory.”