In the lead up to the 1839 Whig National Convention, Congressman Fillmore makes known "a very general conviction" that Henry Clay "ought not, and can not be our candidate for the Presidency" 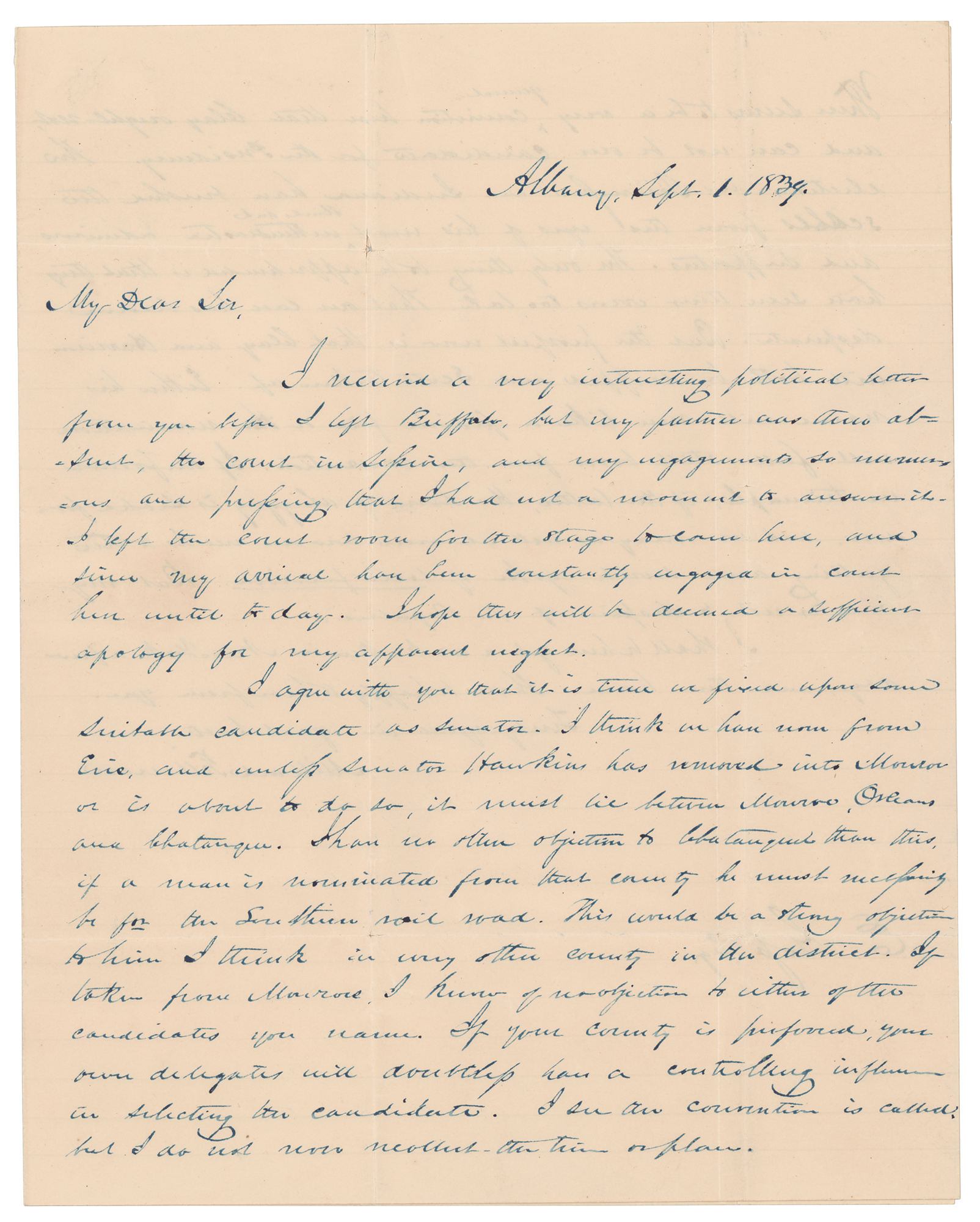 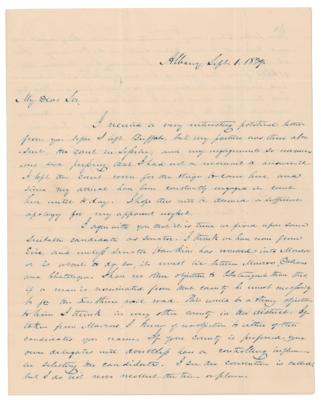 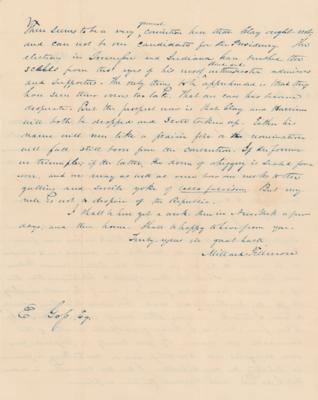 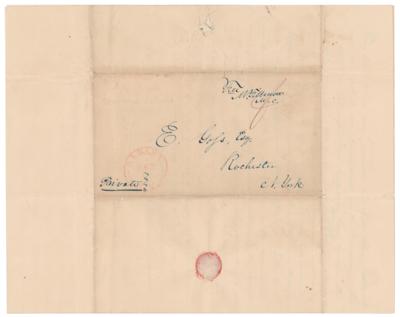 In the lead up to the 1839 Whig National Convention, Congressman Fillmore makes known "a very general conviction" that Henry Clay "ought not, and can not be our candidate for the Presidency"

ALS, one page both sides, 8 x 10, September 1, 1839. Cordial handwritten letter to future New York State Senator Ephraim Gossin, which finds Fillmore considering several local political issues before candidly assessing Whig presidential hopefuls in the election of 1840. In full: “I received a very interesting political letter from you before I left Buffalo, but my partner was then absent, the court in session, and my engagements so numerous and pressing that I had not a moment to answer it. I left the courtroom for the stage to come here, and since my arrival have been constantly engaged in court here until today. I hope this will be deemed a sufficient apology for my apparent neglect.

I agree with you that it is time we fixed upon some suitable candidate as senator. I think we have none from Erie, and unless Senator Hawkins has removed into Monroe or is about to do so, it must lie between Monroe, Orleans, and Chautauqua. I have no other objection to Chautauqua than this, if a man is nominated from that county he must necessarily be for the Southern soil road. This would be a strong objection to him I think in every other county in the district. If taken from Monroe, I know of no objection to either of the candidates you name. If your county is preferred, your own delegates will doubtless have a controlling influence in selecting the candidate. I see the convention is called, but I do not now recollect the time or place.

There seems to be a very general conviction here that Clay ought not, and can not be our candidate for the Presidency. The elections in Tennessee and Indiana have brushed the scales from the eyes of his most blind and enthusiastic advisors and supporters. The only thing to be apprehended is that they have seen their errors too late. That our case has become desperate. But the prospect now is that Clay and [William Henry] Harrison will both be dropped and [Winfield] Scott taken up. Either his name will run like a prairie fire or the nomination will fall still born from the convention. If the former we triumph, if the latter, the doom of whiggery is sealed forever, and we may as well at once bow our necks to the galling and servile yoke of locco focoism. But my note is not to despair of the Republic. I shall be here yet a week, then in New York a few days, and then home. Shall be happy to hear from you.” Addressed on the second integral page by Fillmore, who adds his franking signature in the upper right, "Free, M. Fillmore, M. C." In fine condition.

Fillmore was an active voice in the discussions of presidential candidates prior to the 1839 Whig National Convention. Despite his support for General Winfield Scott, Fillmore was overjoyed by the nomination of General William Henry Harrison for president (with former Virginia Senator John Tyler as his running mate), in large part due to his dislike of Kentucky Senator Henry Clay, a slaveholder who he felt could not carry New York State. The political pathways of Fillmore and Clay, two of the Whig's most prominent voices, would pass at various junctures of their careers, with Fillmore, in 1844, even seeking the VP nomination with Clay as president. This would not come to pass, and neither would any of Clay's White House pursuits. Four years later it would be Fillmore to get the nod as Zachary Taylor's running mate, a nomination aided by the influential support of fellow New Yorker John A. Collier, a Clay man, who believed Fillmore a Whig Party savior. Some 16 months later it would be Fillmore, and not the ambitious Clay, who would attain the presidency.

Organized in New York City in 1835, the Locofocos were a radical wing of the Democratic Party consisting of workingmen and reformers opposed to state banks, monopolies, paper money, tariffs, and generally any financial policies that seemed conducive to special privilege. During the 1840 presidential election, when the Locofocos were at their peak, the name was applied to the entire Democratic Party by Whig opponents like Fillmore, whose dislike for the Democratic Party was memorialized in the title of a volume containing his personal speeches: Loco Foco Congressional Speeches 1840.