Rare handwritten letter by Great Britain's 'father of photography' on his famous patent dispute: "Neither Judge nor jury understood anything of photography" 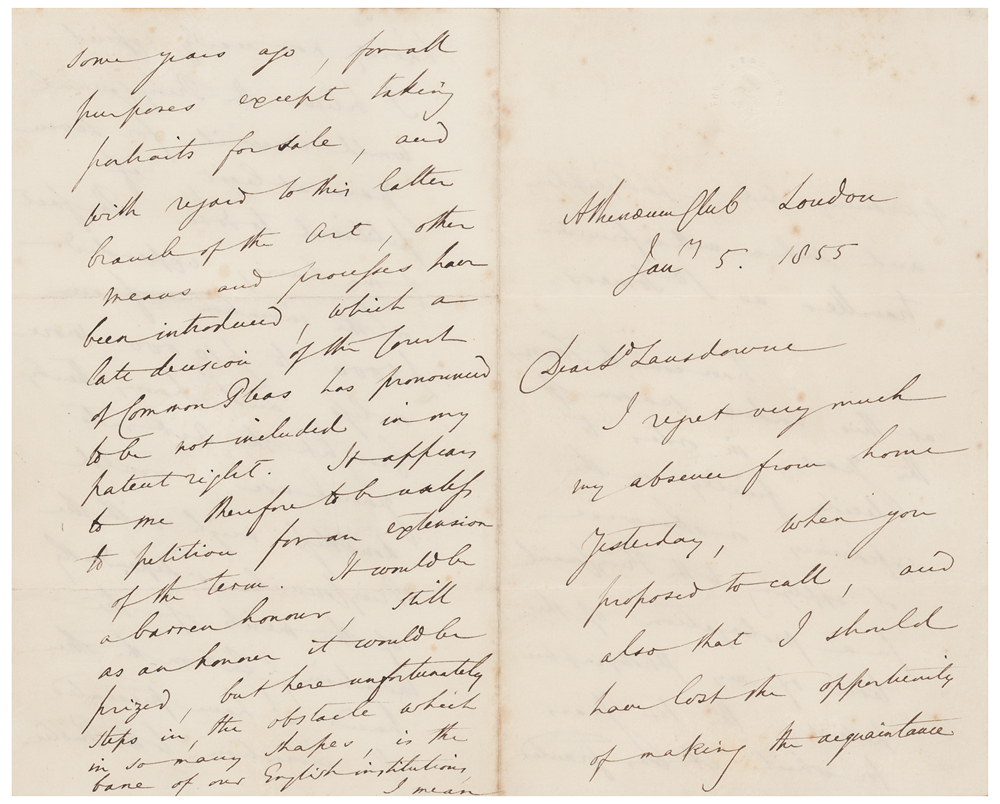 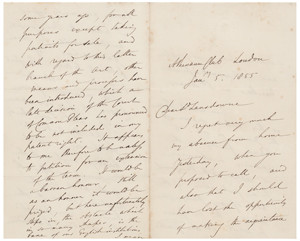 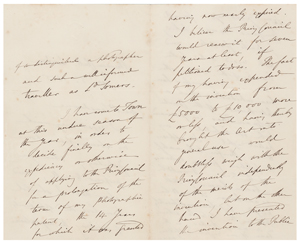 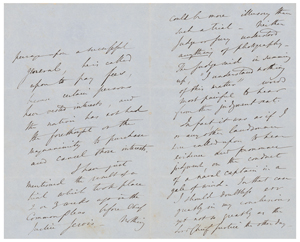 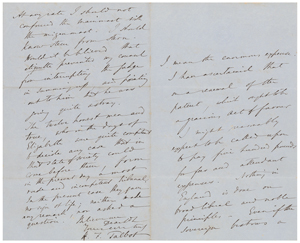 Rare handwritten letter by Great Britain's 'father of photography' on his famous patent dispute: "Neither Judge nor jury understood anything of photography"

British inventor and photography pioneer (1800-1877) who introduced the calotype process in 1841; he was also active in politics, serving as a member of Parliament between 1832 and 1835. Rare and important ALS, signed "H. F. Talbot," eight pages on two sets of adjoining sheets, 4.5 x 7, January 5, 1855. Letter to Henry Petty, 3rd Marquess of Landsdowne, complaining at length about his photographic patent and the proceedings in an associated case. In full: "I regret very much my absence from home yesterday, when you proposed to call, and also that I should have lost the opportunity of making the acquaintance of so distinguished a photographer and such a well informed traveller as Ld. Somers. I have come to Town at this undue season of the year, in order to decide finally on the expediency or otherwise of applying to the Privy Council for a prolongation of the term of my photographic patent, the 14 years for which it was granted having now nearly expired. I believe the Privy Council would renew it for seven years at least, if petitioned to do so. The fact of my having expended on the invention from £5000 to £10,000 more or less, and having thereby brought the art into general use, would doubtless weigh with the Privy Council independently of the merits of the invention, but on the other hand, I have presented the invention to the Public some years ago, for all purposes except taking portraits for sale, and with regard to this latter branch of the art, other means and processes have been introduced, which a late decision of the Court of Common Pleas has pronounced to be not included in my patent right. It appears to me therefore to be useless to petition for an extension of the term. It would be a barren honour, still as an honour it would be prized, but here unfortunately steps in, the obstacle which in so many shapes, is the bane of our English institutions, I mean the enormous expense I have ascertained that on a renewal of the patent, which ought to be a gracious act of favour I might reasonably expect to pay five hundred pounds for fees and attendant expenses. Nothing in England is done on broad liberal and noble principles. Even if the sovereign bestows a peerage upon a successful general, he is called upon to pay fees, because certain persons have vested interests, and the nation has not had the forethought or the magnanimity to purchase and cancel those interests.

I have just mentioned the result of a trial which took place 2 or 3 weeks ago in the Common Pleas before Chief Justice Jervis. Nothing could be more illusory than such a trial. Neither Judge nor jury understood anything of photography. The Judge said in summing up, 'I understand nothing of this matter' words most painful to hear from the judgment seat. In fact it was as if I or any other landsman have called upon to hear evidence and pronounce judgment, on the conduct of a naval captain in a gale of wind. In that case I should doubtless err greatly in my conclusions yet not so greatly as the Lord Chief Justice the other day. At any rate I should not confound the mainmast with the mizenmast. I should know stem from stern. Would it be believed that etiquette prevented my council from interrupting the Judge in summing up and pointing out to him that he was going quite astray.

The twelve honest men and true, who in the days of Elizabeth were quite competent to decide any case that in that state of society could come before them, form in the present day a most rude and incompetent tribunal in the present case they gave no sign of life; neither made any remark, nor asked a question." In fine condition.

In February 1841, Talbot obtained an English patent for his developed-out calotype process, which had a term of fourteen years. He made money by licensing rights to the process: at first, he charged £20 each, later lowering the fee for amateur use to £4; professional photographers, however, had to pay up to £300 annually. He was also known for vigorously defending his rights, frequently in battles in the court system. In the case here referenced here, Talbot v. Laroche, he sought to assert that Martin Laroche's use of the unpatented, collodion process infringed his calotype patent. The jury found that Fox Talbot was 'the first and true inventor of the calotype process…[and] the first person who disclosed it to the public,' but that Laroche had not infringed his patent. Disappointed by this outcome, Talbot chose not to seek an extension of his patent—a decision that ultimately made photography more accessible to the masses.