Extraordinary handwritten lyrics by Jimi Hendrix for the unpublished, never-released song 'To the Wind' 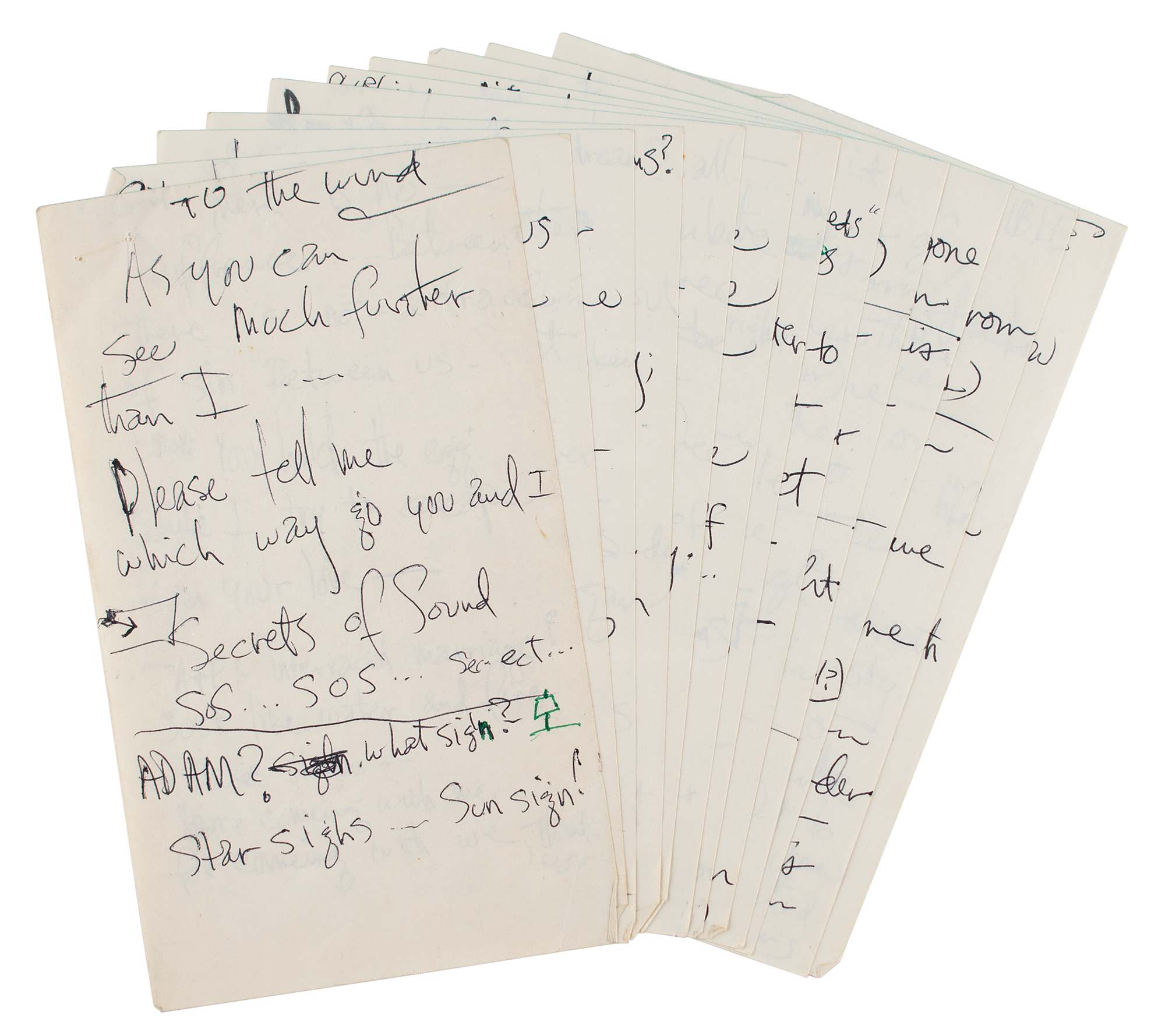 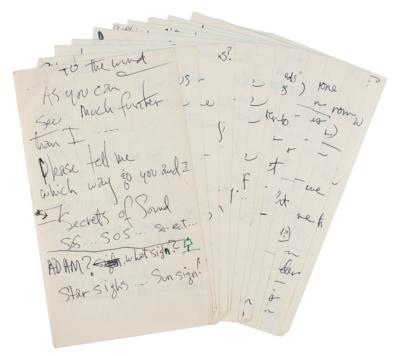 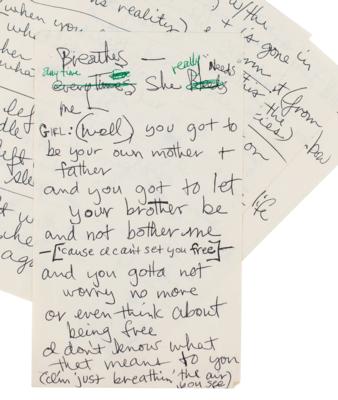 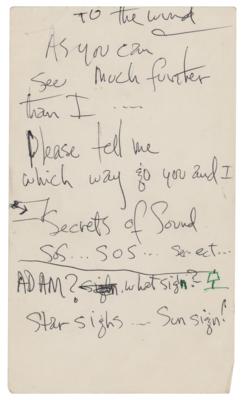 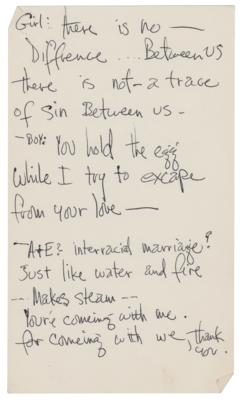 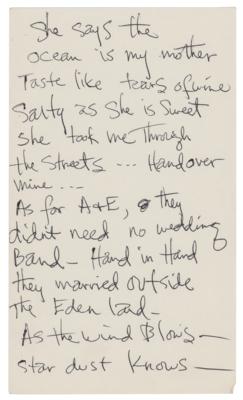 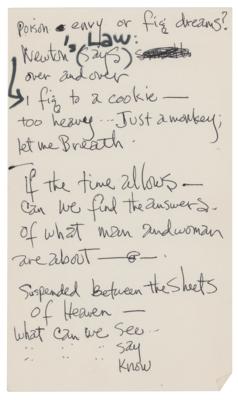 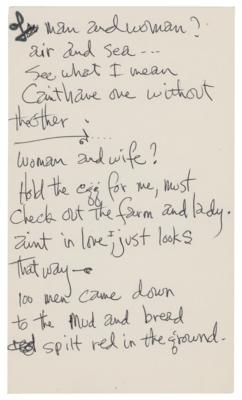 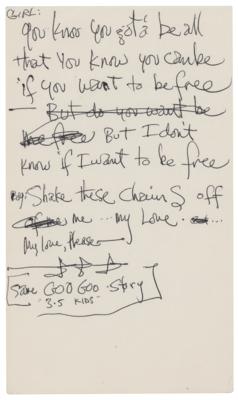 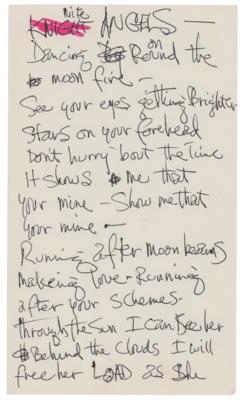 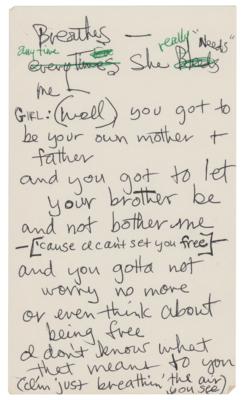 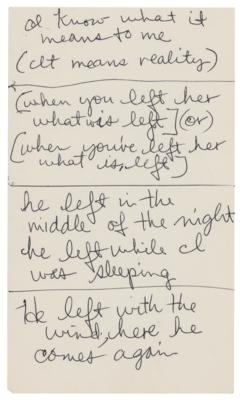 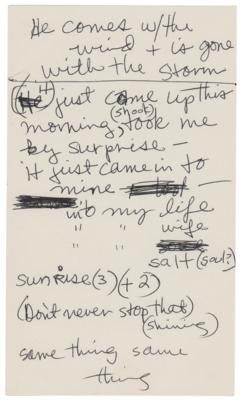 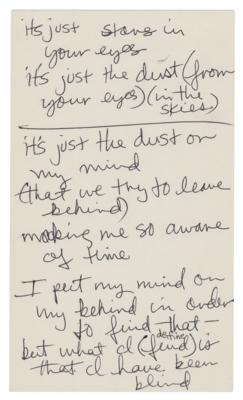 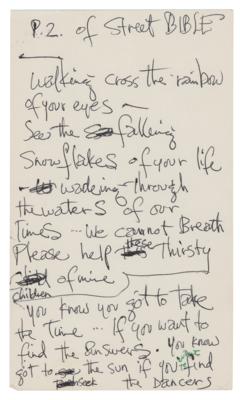 Extraordinary handwritten lyrics by Jimi Hendrix for the unpublished, never-released song 'To the Wind'

Handwritten lyrics by Jimi Hendrix for an unpublished, never-released song entitled ‘To the Wind,’ unsigned, written in black ballpoint on 12 off-white 4.25 x 7.25 sheets of notebook paper, with eight pages (pgs. 1-7 and 12) in the hand of Hendrix, who also adds several notes, corrections, and strike-throughs in green and pink ink, and four pages written in another hand; the upper paragraph of the 8th page was also penned by Hendrix. The lyrics, page by page, read as follows (grammar and spelling retained):

2: Girl: there is no—Difference…Between us / there is not—a trace of sin Between us— / -Boy: You hold the egg while I try to excape from your love— / -A+E? - interracial marriage? / Just like water and fire — Makes steam — / You’re comeing with me. / for comeing with me, thank you.

3: She says the ocean is my mother / taste like tears of wine / Salty as She is Sweet / she took me through the streets—Hand over mine— / As for A+E, they didn’t need no wedding Band / — Hand in Hand they married outside the Eden land — / As the wind Blows — / Star dust knows—

7: Nite Angels — / Dancing on Round the moon fire— / See your eyes getting Brighter / Stars on your forehead / Don’t worry bout the time / It shows me that your mine—Show me that / Your mine— / Running after moon beams / making love-Running / after your schemes / through the sun I can see here / Behind the clouds I will / free her Load as she

8: [The upper section, which closes with “me,” is in the hand of Hendrix, who makes a few emendations in green ink] Breathes—anytime She really ‘Needs’ me— / Girl: (Well), you got to be your own mother + father / and you got to let your brother be / and not bother me / —(cause I can’t set you free)— / and you gotta not / worry no more / or even think about being free / I don’t know what that meant to you / (I’m just breathin’ the air you see)

9: I know what it means to me / (It means reality) / (when you left her was was left) (or) (when you’ve left her what is left) / he left in the middle of the night / he left while I was sleeping / He left with the wind, / here he comes again

12: P.2. of Street Bible / walking cross the rainbow of your eyes— / see the falling snowflakes of your life / wadeing through the water of our Times — / We cannot Breath / Please help these Thirsty children of mine / You know you got to take the time — / If you want to find the answers. / You know got to the sun if you want to find the Dancers.” In overall fine condition, with small creases and folds, and staple holes to the upper left corner of each page; the original staple, now detached, is included. Hendrix lyrics rarely appear at auction and are highly coveted by music collectors.

Simply epic in scale, these passionate handwritten lyrics feature themes both familiar and unique to the Hendrix lyrical canon. In trademark fashion he explores the cosmos; waxes poetic on the classic five elements of earth, water, fire, air, and space; and touches on love, sexuality, freedom, and “interracial marriage.” While the interpretations may vary, there’s no denying the overarching religious motif scattered throughout the song’s 12 pages of lyrics, which find Hendrix shaping a loose narrative around the story of Adam and Eve, who “like water and fire — Makes steam.” With references to Eden, the fig tree, angels, original "sin," and “the Sheets of Heaven,” the lyrics read like the Book of Genesis with a Hendrixian twist, beautifully out-there and unmistakably visionary.

Hendrix embraced the 'electric church' concept as a cosmic, quasi-spiritual belief that music could flow around the world like an electrical force, into bodies and out of souls, enlightening people along the way. On the Dick Cavett show in 1969, Hendrix explained that he designed his music to go 'inside the soul of the person, and awaken some kind of thing inside, because there are so many sleeping people.' It is no coincidence, either, that he literally relied on electricity to create his music in the first place—at its core, the Hendrix sound is the result of an electrical signal passing through a series of wires, magnets, transistors, and vacuum tubes.

As quoted in a 1969 Royal Albert Hall concert program: ‘When I was a little boy, I believed that if you put a tooth under your pillow, a fairy would come in the night and take away the tooth and leave a dime. Now, I believe in myself more than anything. And, I suppose in a way, that’s also believing in God. If there is a God and He made you, then if you believe in yourself, you’re also believing in Him. So I think everybody should believe in himself. That doesn’t mean you’ve got to believe in heaven and hell and all that stuff. But it does mean that what you are and what you do is your religion. I can’t express myself in easy conversation—the words just don’t come out right. But when I get up on stage—well, that’s my whole life. That’s my religion. My music is electric church music, if by ‘church’ you mean ‘religion.’ I am electric religion.”