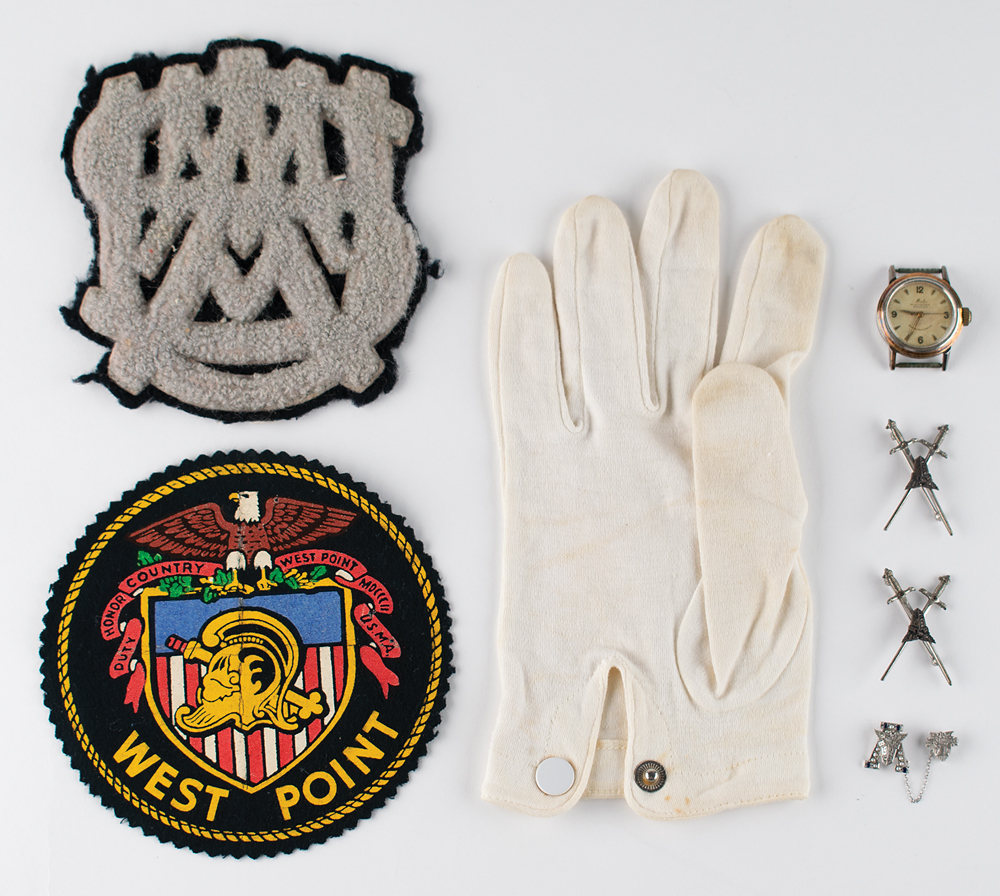 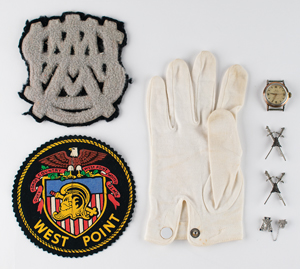 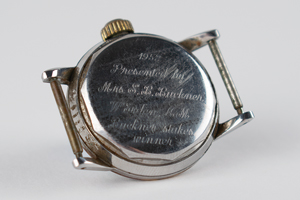 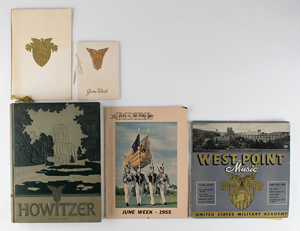 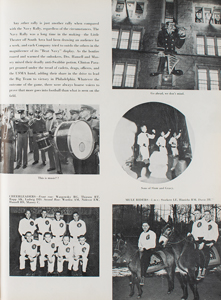 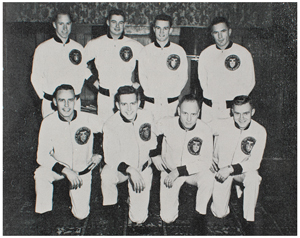 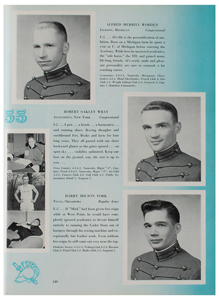 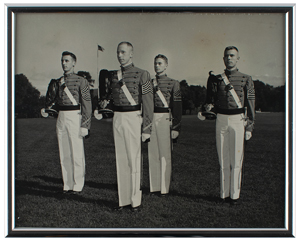 Al Worden’s collection of 16 items dating to (or related to) his four-year career as a cadet at the United States Military Academy in West Point, New York, from which he graduated at the age of 23 in June 1955. This small archive contains several of Worden’s own personal military effects, many of which correspond to his graduation, including:

A pair of sterling silver USMA crossed swords pins, both 1″ x 1.5″, with a red stone in each cross-guard (one missing), and the center of each pin featuring the 1955 graduating class emblem.

A West Point "A" fraternity or ‘sweetheart’ pin for the graduating class of 1955, consisting of two pins linked with a chain: an “A” pin, .5″ x .5″, with blue stones and pearls with overlain 1955 emblem; and a .5″ x .25″ pin bearing the USMA coat of arms. West Point cadets give these pins to their significant others as a formal engagement announcement. Worden married his first wife, Pamela Vander Beek, on June 9, 1955, two days after graduating.

The 1955 Howitzer yearbook for the United States Military Academy at West Point, 489 pages, 9.5x 12.25, with ownership names of Al and Pam Worden printed on the lower front cover. Al Worden’s graduating picture and biography can be seen on page 349, and he can also be viewed as a member of the cheerleading team on page 125.

Two identical copies of Worden’s academic records from the USMA from 1951 to 1955, both 6.25 x 9.5, which shows Worden graduating 47th out of a class of 469. Worden received consistently high marks in Math and the Sciences; conversely, his lowest scores were in English.

An issue of the USMA’s The Pointer magazine from June 3, 1955, Vol. XXXII, No. 17, with the front cover showing four flag-bearing cadets over the bold text: “June Week—1955.” Worden and his newly wedded wife Pamela Vander Beek are mentioned on page 14 as part of a section entitled “Lt. and Mrs.…Is the Name,” which lists all the recent cadet marriages by company.

A West Point “June Week” program for the USMA’s graduating class of 1955, 4.5 x 6, with an opening page reading: “The Class of Nineteen Hundred Fifty-five of the United States Military Academy announces its Graduation, Tuesday, June the seventh, West Point, New York.” Worden’s name is listed at the end of the Class Roll.

A menu for a 1955 graduation dinner held for the USMA Class Officers and Class Committee on June 4, 1955, housed in its original 6.25 x 9.5 presentation folder.

A vintage glossy 9.5 x 7.5 photo of Worden posing in military uniform with three other West Point cadets, framed to a slightly larger size.

An off-white right-handed military dress or parade glove, 8.5″ in length, with a snap closure to the wrist.

A 5.5″ felt patch featuring the coat of arms of the United States Military Academy.

A Mido Multifort Grand Luxe Super Automatic watch (without strap), which is engraved on the reverse: “1952, Presented by Mrs. S. B. Buckner, Worden, A. M., Buckner-stakes winner.”

A 10-inch West Point Music 33 ⅓ rpm record from the United States Military Academy, which features songs by the USMA Band and the Cadet Glee Club. The record is included.

A first edition of West Point in the Making of America, hardcover with dust jacket, published by Hydra Publishing of Irvington, New York in 2002. In overall fine condition.