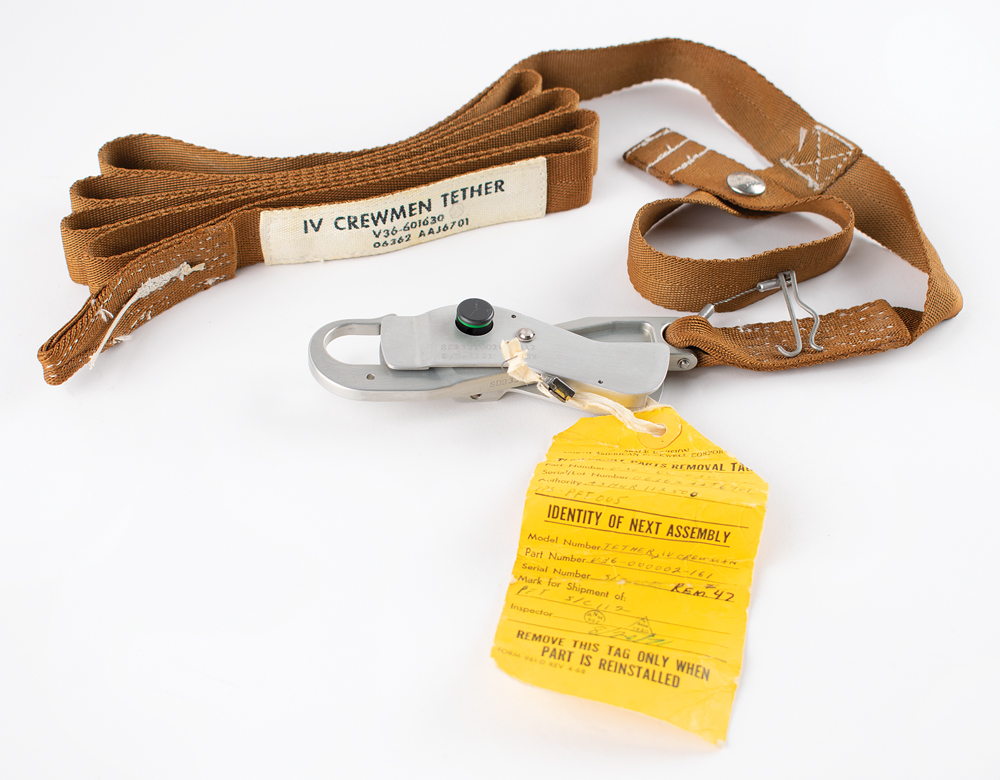 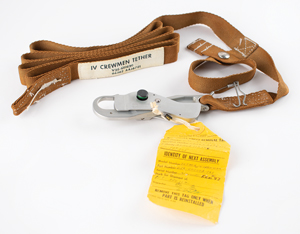 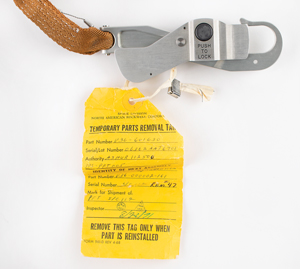 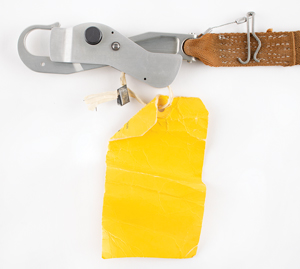 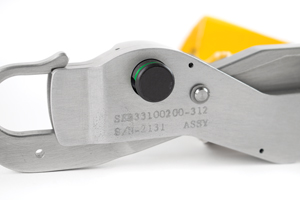 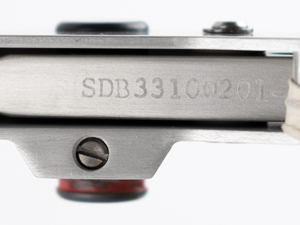 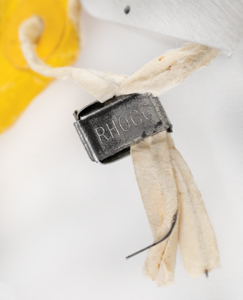 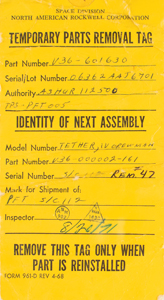 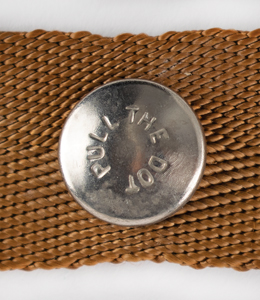 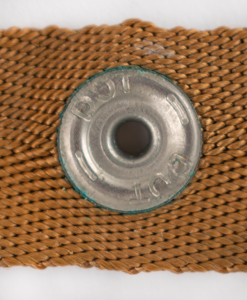 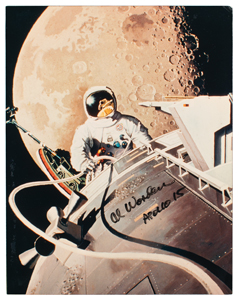 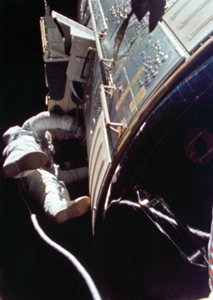 Al Worden’s flown EVA “IV Crewmen Tether” attached to the space suit of Lunar Module Pilot Jim Irwin during the Apollo 15 mission’s record-breaking ‘deep space’ spacewalk on August 5, 1971. The mission’s final EVA occurred when Command Module Pilot Worden, on the 11th day of the mission, exited out through the main hatch of the CSM Endeavour and moved to the SIM (Scientific Instrument Module) bay to retrieve film magazines from the panoramic and mapping cameras and to visually inspect the bay. Over the span of 38 minutes, Worden performed a series of three trips along the SIM bay, while LMP Irwin, wearing his lunar surface EVA suit, performed a ‘stand-up’ EVA from the CSM hatch. Irwin’s role was both to monitor his CMP and to receive the two film canisters Worden removed from the cameras; in order to do so safely, Irwin was secured to the spacecraft by the tether offered here.

Included is a color glossy 10.75 x 13.75 photo of artist Pierre Mion’s painting of Al Worden’s EVA point of view, which depicts Irwin holding onto Worden’s umbilical cord from the CSM hatch, with the moon massive in the background and Irwin’s visor showing a small reflection of the mission CMP. The photo is signed in black felt tip, “Al Worden, Apollo 15,” and is affixed to a same-size piece of foamcore. Unable to visually document the EVA from his own perspective, Worden did the next best thing by working closely with Mion to carefully craft a scene reminiscent of that magical moment. In overall fine condition. An astounding flown keepsake from an EVA that’s been described as the first interplanetary spacewalk, one which derives from an age that placed much significance on space ‘firsts.’

A selection of Worden’s firsthand EVA experience as quoted from his 2015 article in Smithsonian Magazine: ‘Once the cabin pressure went to zero, we opened the hatch and looked out. Black as the ace of Spades, but as Jim and I floated out, there was enough sunlight to light our way. It was an unbelievable sensation. I described it once as going for a swim alongside Moby Dick…What a feeling to be free in deep space about 196,000 miles from home.’

Taken from the 1971 Technical Debrief for Apollo 15, Worden describes in greater detail the success of the EVA: ‘After getting the hatch open, the first thing I did was take the TV and the DAC and mount them on the bracket in the hatch. The hatch didn't get fully opened the first time. When I got part way out, I guess you opened the hatch the rest of the way so that the camera was pointing down along the SIM bay. I just went outside the hatch, grabbed the first handrail, and positioned myself just outside the hatch until Jim got in the hatch to observe and to watch the umbilical.

Once we got the side hatch open, from that point to the time we closed the hatch, the whole operation went almost exactly as it had in preflight training, both in the zero-g airplane and the Water Immersion Facility. I don't recall anything during the EVA that I thought was off-nominal. As a matter of fact, it was so much like preflight, that I really had no anxieties about the EVA at all. The whole thing went just as smooth as it could.’ From the collection of Apollo 15 CMP Al Worden, and accompanied by a letter of provenance from his daughter Alison (Worden) Penczak.