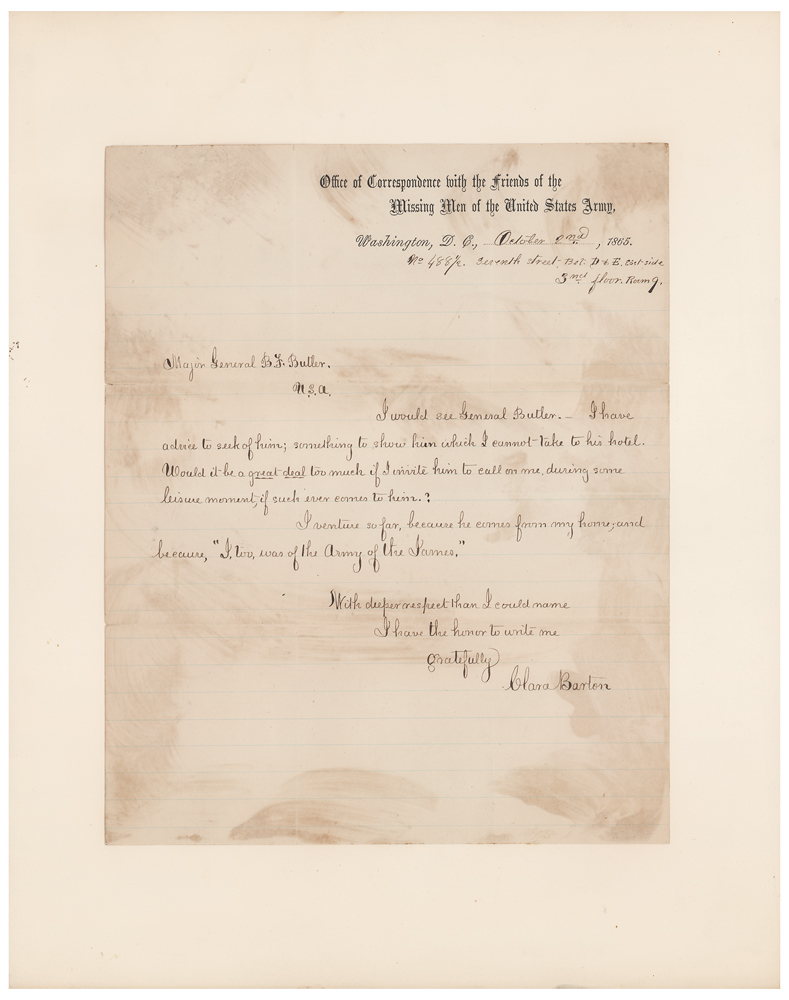 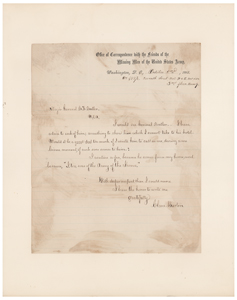 ALS, one page, 8 x 10, Office of Correspondence with the Friends of the Missing Men of the United States Army letterhead, October 2, 1865. Letter to General Benjamin F. Butler, who helped Barton overcome political obstacles during her long career. In full: "I would see General Butler. I have advice to seek of him; something to show him which I cannot take to his hotel. Would it be a great deal too much if I invite him to call on me during some leisure moment, if such ever comes to him? I venture so far, because he comes from my home; and because, 'I, too, was of the Army of the James.'" The letter is affixed to an 11 x 14 mount. In very good to fine condition, with staining from old adhesive residue on the reverse.

The Army of the James was a Union Army that was composed of units from the Department of Virginia and North Carolina and served along the James River during the final operations of the American Civil War in Virginia. It was commanded by Benjamin Butler, and it was Clara Butler who made Barton the head nurse, even though she had no formal medical training.

After working on battlefields and in hospitals of the Civil War, Barton found a new calling in the early months of 1865. As the conflict drew to a close, the 44-year-old war relief worker arrived in Annapolis, Maryland, where transports of sickly Union prisoners arrived from prison camps across the South. Working with the survivors, Barton became keenly aware of the need to provide information to the families of missing Union soldiers. In response, she endeavored to open a Missing Soldiers Office to offer this invaluable service to grieving families.

After receiving approval from President Abraham Lincoln in March 1865, Barton began the immense task of tracking down those who disappeared during the conflict. Without government-issued identification, fallen soldiers went missing at an alarming rate during the Civil War.

She opened an office on the third floor of her boarding house on 7th Street in Washington, and soon began to receive thousands of letters from relatives looking for lost loved ones. Over three years, the office received more than 60,000 inquiries for information about missing soldiers, sometimes more than 150 letters in a single day. When Barton closed the Missing Soldiers Office after 1868, she and her team had accomplished a tremendous feat. Their work had revealed the whereabouts of more than 22,000 missing soldiers, providing closure for families devastated by the loss of their loved ones.

The Missing Soldiers Office marks an important transition in Barton’s humanitarian career. She no longer wanted for organizational support to provide humanitarian aid. In her third floor office, she practiced the art of administration and organization with a devoted team of workers, backed by enthusiastic donors. These skills, combined with a reputation built during her national speaking tour, put Clara Barton on the path toward becoming the nation’s foremost humanitarian and founder of the American Red Cross.