A 'T.U.R.D. Award’ for Charlie Duke and his T-38 difficulties 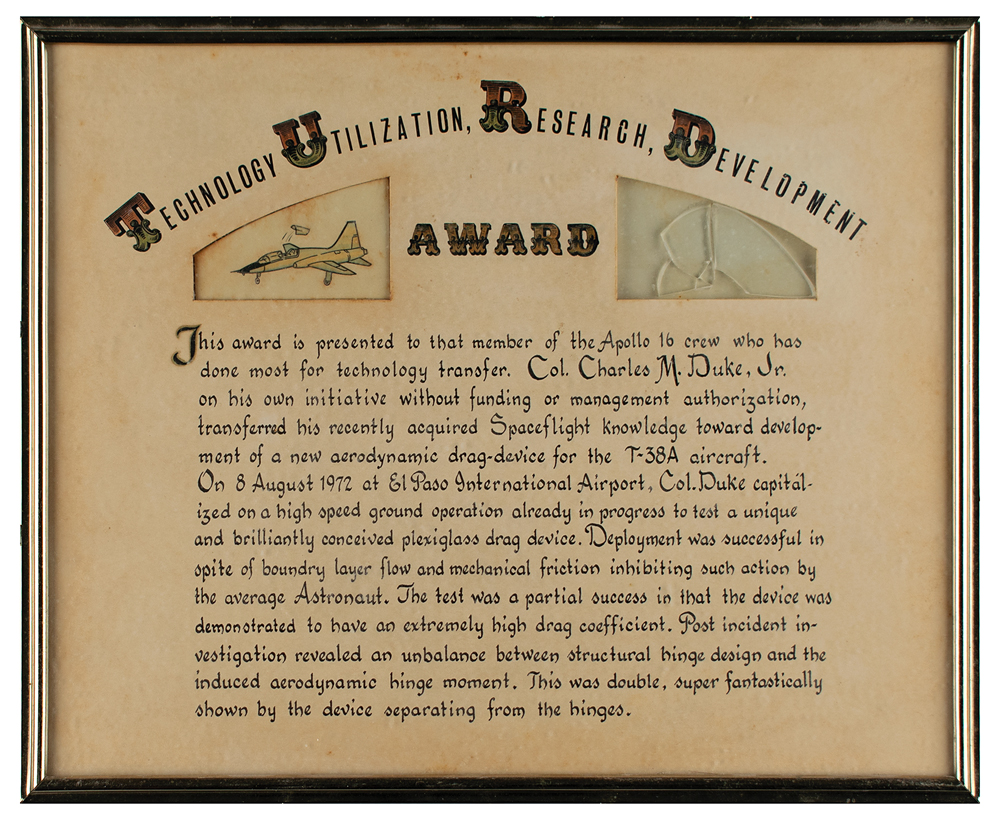 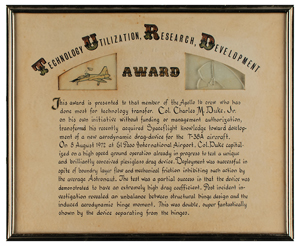 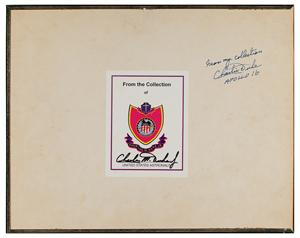 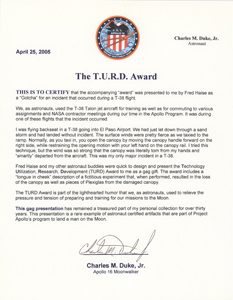 A 'T.U.R.D. Award’ for Charlie Duke and his T-38 difficulties

Humorous and one-of-a-kind ‘T.U.R.D. Award’ presented to Charlie Duke by fellow Apollo astronaut Fred Haise in 1972. The partly printed ‘gag’ certificate, one page, 13.25 x 10.25, is headed “Technology Utilization, Research, Development,” and was given to Duke for a troublesome incident he had while landing a Northrop T-38 Talon. It reads: “This award is presented to that member of the Apollo 16 crew who has done most for technology transfer. Col. Charles M. Duke, Jr. on his own initiative without funding or management authorization, transferred his recently acquired Spaceflight knowledge toward development of a new aerodynamic drag-device for the T-38A aircraft. On August 8, 1972 at El Paso International Airport, Col. Duke capitalized on a high speed ground operation already in progress to test a unique and brilliantly conceived plexiglass drag device. Deployment was successful in spite of boundary layer flow and mechanical friction inhibiting such action by the average Astronaut. The test was a partial success in that the device was demonstrated to have an extremely high drag coefficient. Post incident investigation revealed an unbalance between structural hinge design and the induced aerodynamic hinge moment. This was double, super fantastically shown by the device separating from the hinges.” Framed to a slightly larger size with inset windows featuring a small sketch of a T-38 and three shards of broken Plexiglas; reverse of framed is signed "From my collection, Charlie Duke, Apollo 16," and features an affixed "From the Collection of Charles M. Duke, Jr." label, which is also signed. In fine condition, with some light age toning.

Accompanied by a signed letter of authenticity from Duke, which reads: “The accompanying ‘award' was presented to me by Fred Haise as a ‘Gotcha’ for an incident that occurred during a T-38 flight…I was flying backseat in a T-38 going into El Paso Airport. We had just let down through a sand storm and had landed without incident. The surface winds were pretty fierce as we taxied to the ramp. Normally, as you taxi in, you open the canopy by moving the canopy handle forward on the right side, while restraining the opening motion with your left hand on the canopy rail. I tried this technique, but the wind was so strong that the canopy was literally torn from my hands and ‘smartly’ departed from the aircraft…Fred Haise and my other astronaut buddies were quick to design and present the Technology Utilization, Research, Development (TURD) Award to me as a gag gift…This gag presentation has remained a treasured part of my personal collection for over thirty years.”