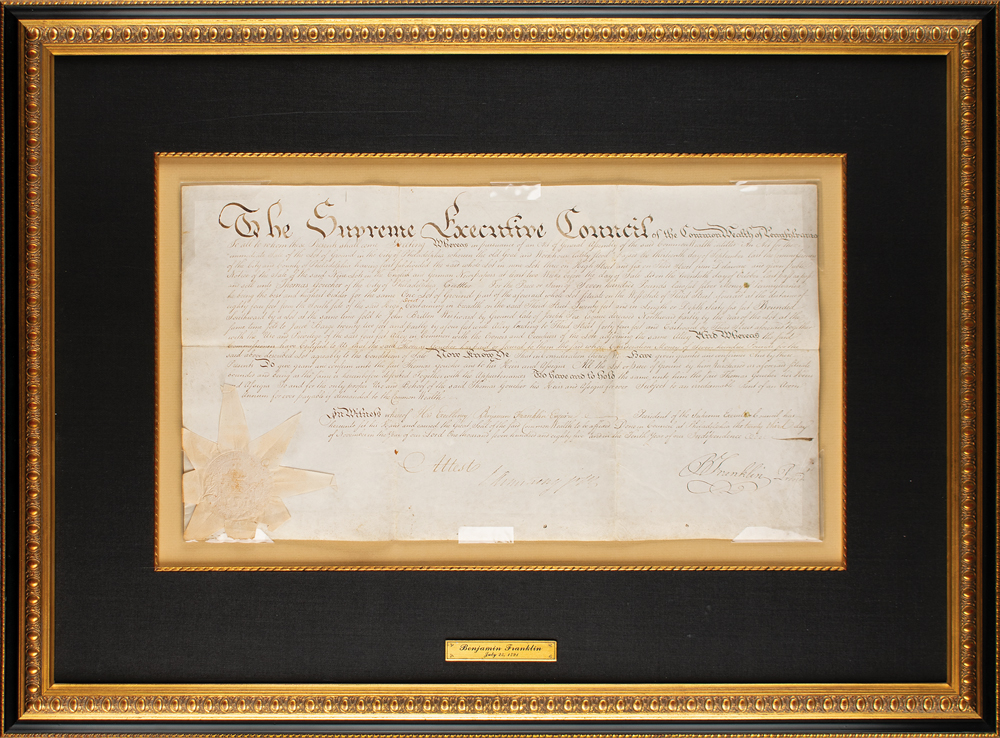 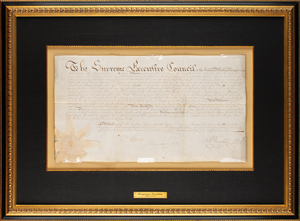 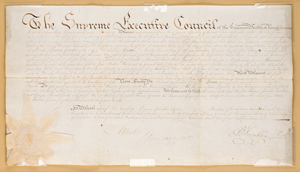 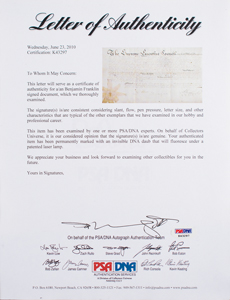 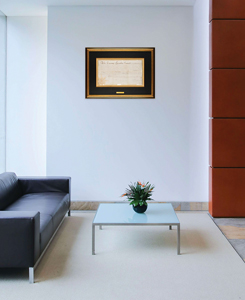 Vellum manuscript DS, signed "B. Franklin, Presidt.," one page, 20 x 11.25, November 23, 1785. As president of Pennsylvania's Supreme Executive Council, Franklin grants a parcel of land under the provisions of an act titled "An Act for the immediate Sale of the Lot of Ground in the City of Philadelphia whereon the old Goal [i.e., "gaol," the British variant of "jail"] and Workhouse lately stood," issued to Thomas Goucher, "cuttler" [a maker or seller of knives]. The front of the document bears the mostly intact embossed paper seal at lower left. The reverse bears two additional seals: one from the "Inrollment Office of Pennsylvania," with the three-part obverse of the state seal, depicting a ship under full sail, a plow, and three sheaves of wheat; the other features the reverse of the state seal, depicting the figure of Liberty trampling Tyranny (represented by a lion) and the motto "Both Can't Survive" [color copy included in sleeve on the reverse of frame]. Attractively corner-mounted, matted, and framed under UV-protective museum glass to an overall size of 31.75 x 23.25. In fine condition. Accompanied by a full letter of authenticity from PSA/DNA.

At the time he signed this document, the 79-year-old Franklin had only recently returned to the United States from France, where he served as the American ambassador for nearly a decade. The Supreme Executive Council of the Commonwealth of Pennsylvania comprised the executive branch of the Pennsylvania state government between 1777 and 1790, with its president and vice president assuming the same roles as a modern day governor and lieutenant governor. His three-year presidency was one of Franklin's last acts of his public service, as he passed away less than two years after leaving office. Franklin was also the longest serving president, having held the office for slightly over three years. Goucher, to whom this land was granted, made garden tools at his Philadelphia shop—a major part of the area's commerce at the time. Franklin's autograph on this document is dark, clear, and crisp—a handsome and very pleasing example.