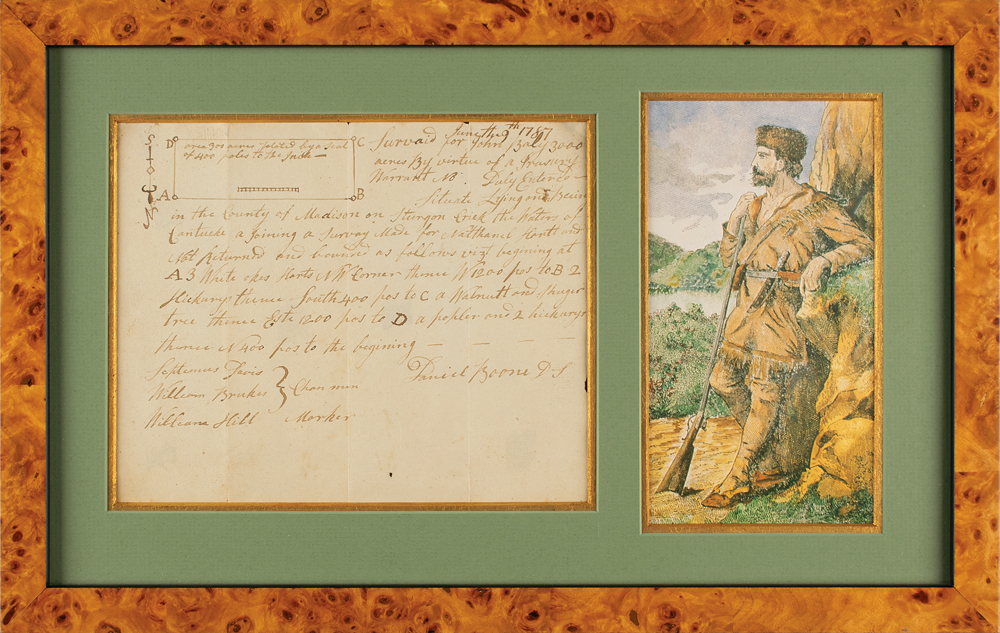 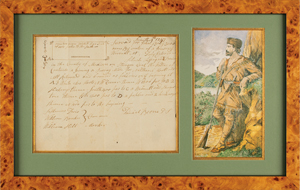 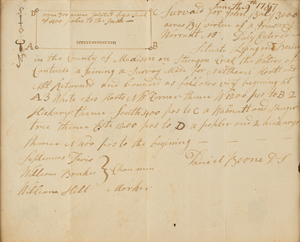 ADS, signed "Daniel Boone, D.S.," one page, 7.75 x 6.25, June 9, 1787. Land survey penned by Boone as deputy surveyor of Kentucky, which reads (spelling and grammar retained): "Survaid for John Baly 3000 acres by virtue of a treasury warrant No. Duly Entered—Situate lying and being in the county of Madison on Sturgon Crick the Waters of Cantucke a joining a survey made for Nathanel Hartt and not returned and bounded as follows viz beginning at A3 White oaks Harts NW Corner thence W1200 pos to B2 Hickurys thence South 400 pos to C a Walnutt and shugar tree thence Este 1200 pos to D a popler and 2 hickurys thence N 400 pos to the beginning." Signed neatly at the conclusion by Boone, who adds the names of his chainmen and marker. In the upper left, Boone draws a diagram of the land in question, noting: "area 300 acres plated by a scale of 400 poles to the Inch." Attractively double-matted and framed with an illustrated portrait to an overall size of 16.5 x 10.5. In fine condition.

As a pioneer and frontiersman, Daniel Boone was influential in extending the nation beyond the peaks of the Allegheny Mountains. With the company of his brother Squire, he explored the Kentucky wilderness from 1767 to 1769, and eventually settled his family in the territory in 1773. Two years later he extended the Wilderness Road over the Cumberland Gap through the Allegheny Mountains and erected three settlements, one of which was named ‘Boonesborough.’ In the wake of the Revolutionary War, Boone resettled in Maysville, Kentucky, and was elected to the Virginia state assembly in 1787. His military pursuits over, Boone became a local celebrity and for a period earned a profitable living as a tavern keep, a surveyor, a horse trader, and a land speculator. The legalities of the latter soon caught up with Boone’s sense of honor and weak investment strategies, and in 1788 he moved upriver to Point Pleasant, Virginia, operating at a trading post and then occasionally as a surveyor's assistant. An interesting land document dating to the most prosperous period of Boone’s life.