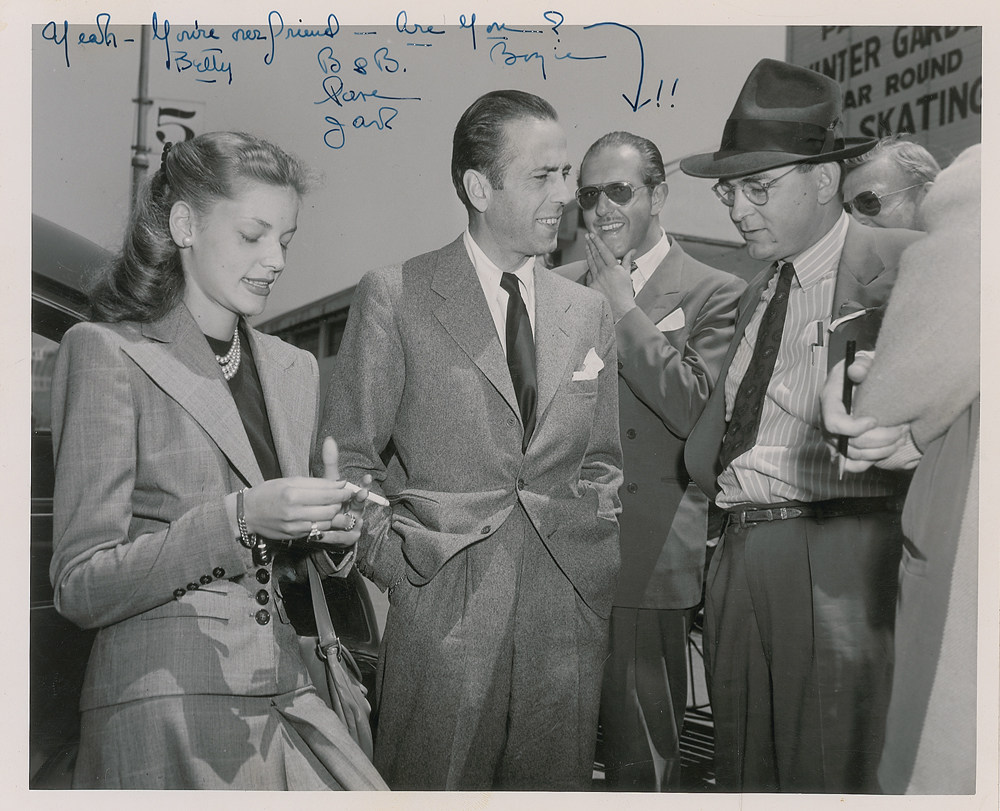 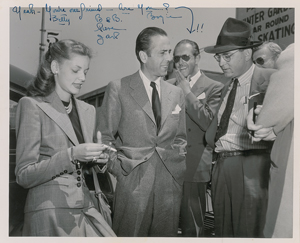 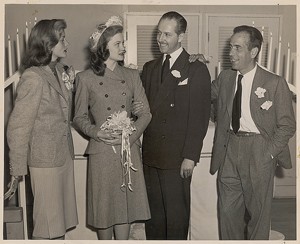 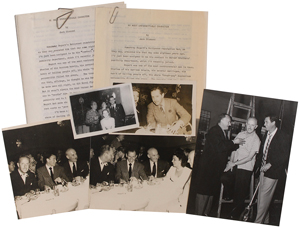 Vintage glossy 10 x 8 Warner Bros. publicity photo, taken by Floyd McCarty, of Bacall, Bogart, his publicity agent Jack Diamond, and others standing outside on a street, signed and inscribed in fountain pen by Bogart to Diamond, "Yeah—You're our friend—Are you? Bogie, B[ogie] & B[etty] love Jack," and signed by Bacall, "Betty." In fine condition.

Jack Diamond, Bogart's contact in the Warner Bros. publicity department, and later Studio Publicity Director for Universal Studios, enjoyed a long and rewarding friendship with the actor. When Diamond wed Frances Henderson in 1946, Bogart and Bacall acted as the best man and matron of honor, and hosted a wedding supper on board the Santana. Accompanying the photo are two original photos of the Diamonds, Bogart, and Bacall at their wedding; original photos of Diamond with Frank Sinatra and Rock Hudson; a photo of Diamond's wife with Sinatra; a candid snapshot of Bogart, Bacall, Frances Diamond, and another man outside on a snowy balcony; and another candid photo of Diamond posing with an unidentified woman at a cocktail table. Also included is a 14-page typed and hand-annotated manuscript of Diamond's recollection of his time with Bogart, including their first meeting, a run-in with Peter Lorre, his wedding and reception on the Santana, and having cocktails with Bogart during his final days battling cancer, including a personal moment shared between the dying actor and Frank Sinatra. Just the third photo we have ever offered signed by the couple, made even more special by the lengthy personal and professional relationship between Bogart, Bacall, and their longtime close friend.

This item is Pre-Certified by Beckett
Buy a third-party letter of authenticity for $100.00