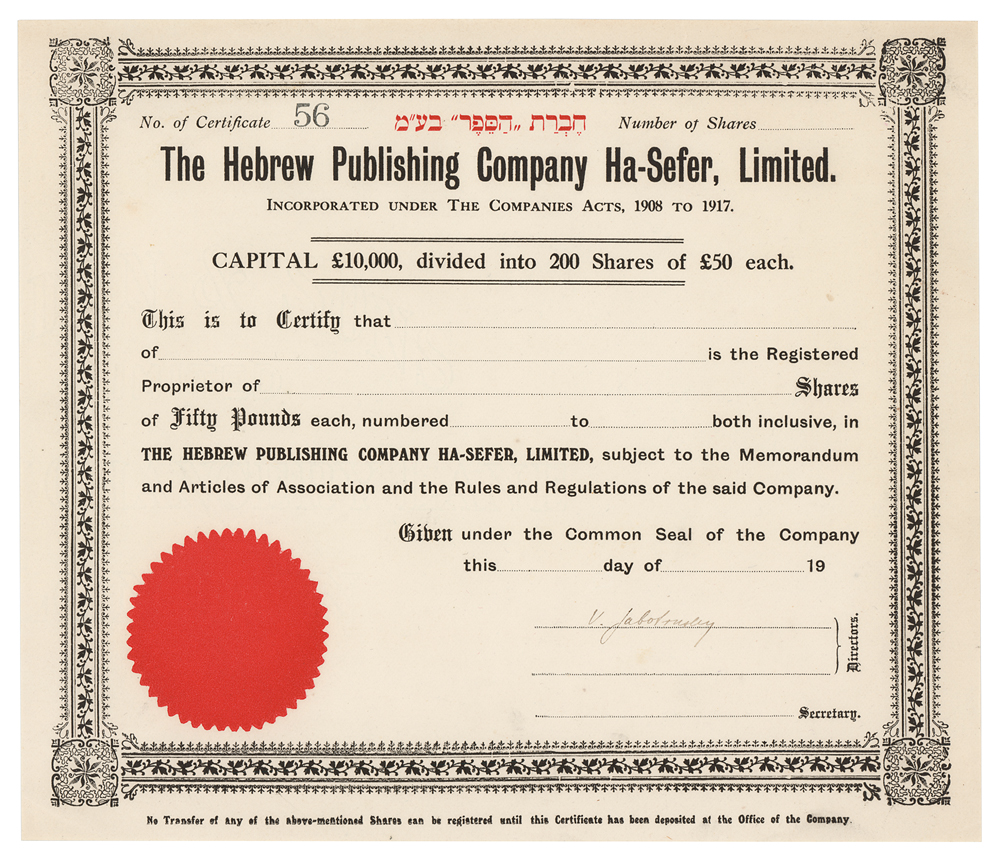 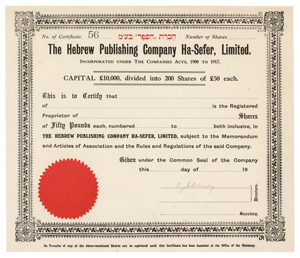 Russian Jewish Revisionist Zionist leader (1880-1940) who was also an author, poet, orator, soldier, and founder of the Jewish Self-Defense Organization in Odessa. With Joseph Trumpeldor, he co-founded the Jewish Legion of the British army in World War I, and later established several Jewish organizations in Palestine, including Betar, Hatzohar, and the Irgun. DS, signed “V. Jabotinsky,” one page, 9.5 x 8, no date. Handsomely engraved incomplete stock certificate for the Hebrew Publishing Company Ha-Sefer, Limited, issued as certificate No. 56, with the lower left printed with an embossed faux red seal. Signed neatly at the conclusion by Ze'ev Jabotinsky as a director. In fine condition.

In 1911, with his friend Shlomo Saltzman, Jabotinsky established the Turgeman Publishing House, dedicated to translating classic works of literature into Hebrew. In 1923, he and Saltzman founded the Hasefer publishing house (Hebrew for “The Book”) with plans to relocate from Berlin to Palestine. ‘Hasefer’s business plan was to concentrate on text and reference books, with a Hebrew atlas as its first major project. An ambitious undertaking involving extensive research and painstaking graphic design, this took two years and a large investment of Jabotinsky’s time to complete,’ (Jabotinsky: A Life, Halkin). This undated stock certificate lays out the nature of the capital to be raised by the sale of stock, but was not completed except for Jabotinsky’s signature as one of the designated directors.

Simultaneous with his involvement in Hasefer, Jabotinsky wrote several historical novels, worked as an editor for the Jewish weekly Rassvet in Berlin in Paris and continued to promote the cause of an autonomous Jewish state. For those views, the British Colonial Office banned him from returning to Palestine in 1930. Undeterred, he continued to lecture around the world, proposed a plan to evacuate Jews in Eastern Europe in 1936 and a plan for an armed revolt against the British in 1939, the latter thwarted by the outbreak of World War II. Jabotinsky’s influence on Israeli politics is profound and long-lasting. Autographs of Jabotinsky are uncommon and especially rare in this format; possibly a unique example as there are no records of this certificate having ever been offered.