Content rich letter from Matisse on painting and family, highlighted by the presence of two original sketches 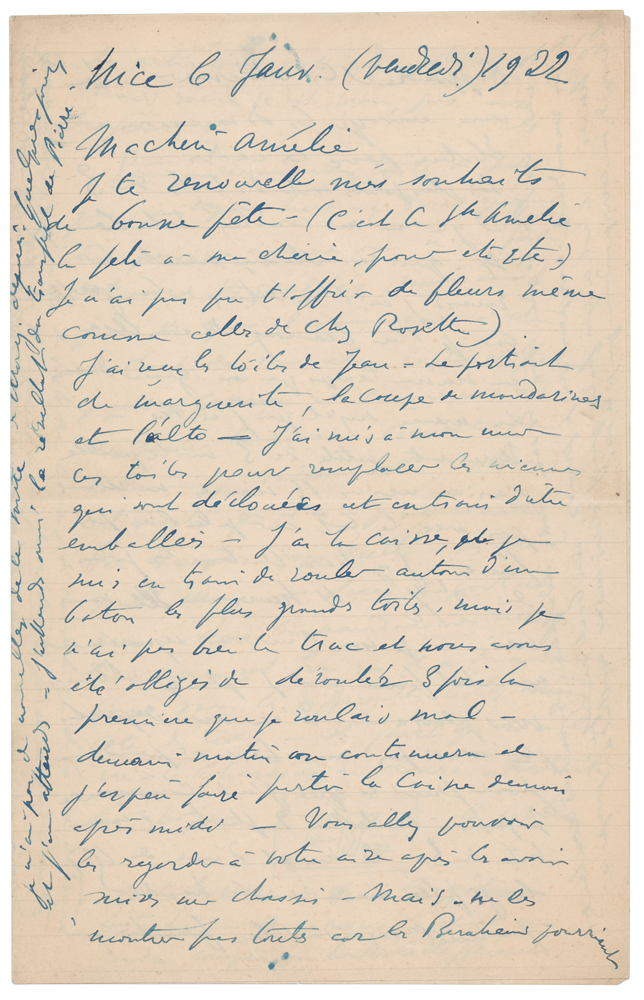 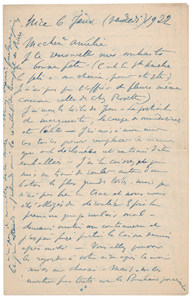 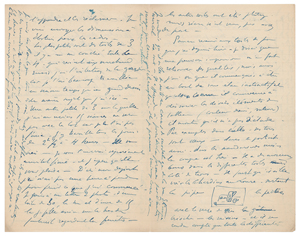 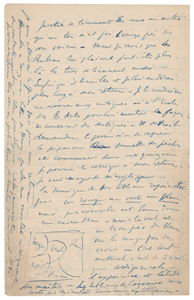 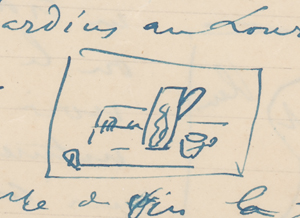 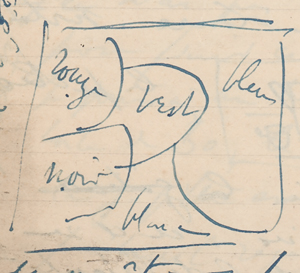 Content rich letter from Matisse on painting and family, highlighted by the presence of two original sketches

ALS in French, signed “H. M.,” four pages on two adjoining sheets, 5.5 x 8.5, January 6, 1922. Addressed from Nice, a lengthy handwritten letter to his wife Amelie, stating that he has received Jean's paintings, including a portrait of Marguerite, a bowl of mandarins and a viola, adding that he has placed them on his wall to replace his own which are currently being packed (translated): “I have the trunk and am trying to roll the biggest paintings around a stick, but haven't quite figured out the right way, and we've had to redo the first one, which I didn't do well, three times.” He hopes that they will be sent tomorrow afternoon, remarking “You can look at them at your leisure once they have been put on their stretcher bars. But don't show the whole lot because the Bernheims [Bernheim-Jeune, one of the oldest art galleries in Paris] could find out about it and reclaim them.” He continues further with detail about the paintings and his current work, “The smallest are paintings of 3. One of them is an unprimed one of 4 that is coming back for the gallerists, but I intend to keep it because I worked on it a lot at the same time as a large design on the same subject that I have here. Another small one of 3 which I worked on in at least 15 sessions will not be with the lot because I have not finished it. I work on it 2 ½ to 4 hours every day, and it is going well. I will send it to you separately once it is done, and I hope you will like it. From now until my departure, I will not have enough time to finish what I have started. I am enclosing in my letter 2 photos [no longer present] one of a painting of 30, the nude, and one of a 15, a young girl seated on the arm of a chair, looking at the window.”

Matisse returns to the subject of their son, Jean, and his paintings, commenting “I would say that my first impression made me see qualities but I also saw that he is at the peak of his instinctive elan and that he is starting to dissociate the various elements of the painting (colour, design, value). It shows that he has not studied it. For example in the viola…and in the portrait, and also the mandarins, but the bowl is good. There are good parts in all paintings, next to flaws. He really has to go and see the Chardins at the Louvre, especially the pipe [at this point in the letter, Matisse has drawn a small ink sketch representing Jean Simeon Chardin's still life Pipes and Drinking Vessels] the peaches and the glass of wine, the brioche, the grapes, and he will come to understand that the different parts hold each other together and that the tone of one is not lesser than the one next to it [he adds in the margin that he would like Jean to do a modelling course, “He will learn to draw shapes in other ways than he does now”] But I suspect he will like the Rubens better, but in them the tones hold each other together as well. At least he is working, and I will speak to him more when I am back. I will take him to the Antiquities section of the Louvre and the School of B. Arts to show him how to look at antiquities. He should ask for permission to copy the pipe…I can then critique his work when I come back. I will try to make it easy for him to understand.”

He concludes with thought of his wife's own art: 'The music of your painting, represented by red and green and blue-black is good overall [at this point in the letter Matisse has drawn a small diagram, within a square, identifying the juxtaposition of the colours] but the green does not work well next to the blue, nor does the red next to the black. It is normal and work will correct it. Experience, and the study of the masters, the paintings of Cezanne.” In fine condition. Amelie Noellie Parayre (1872-1958) was the wife of Henri Matisse from 1898 until their divorce in 1939. Matisse and his wife had two sons, Jean and Pierre, and they also raised the artist's illegitimate daughter, Marguerite, who served as a model for the artist. A hugely desirable letter of insightful content that relates to both painting and family, and is furthermore enhanced by the presence of two small illustrations by the French master.