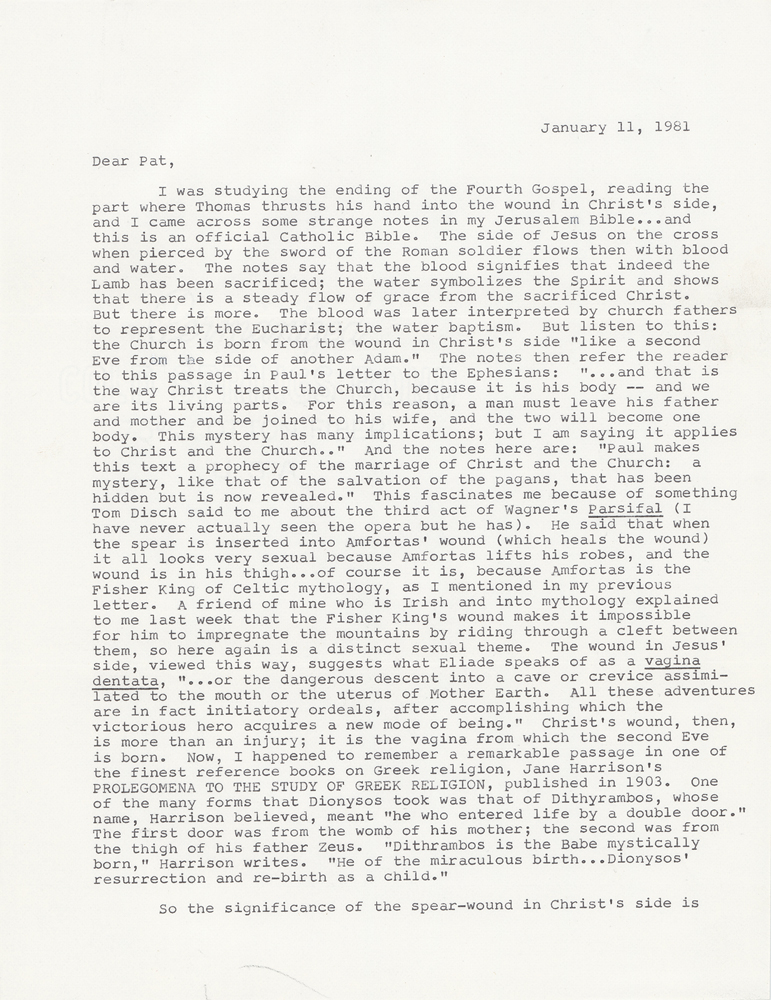 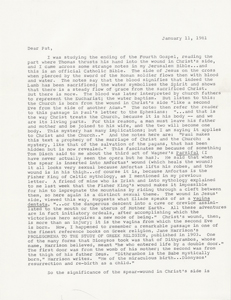 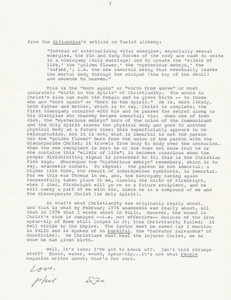 Wonderful TLS signed “Love, Phil,” who adds a heart with arrow, three pages, 8.5 x 11, January 11, 1981. Lengthy letter to science fiction author Patricia Warrick, in full: "I was studying the ending of the Fourth Gospel, reading the part where Thomas thrusts his hand into the wound in Christ’s side, and I came across some strange notes in my Jerusalem Bible…and this is an official Catholic Bible. The side of Jesus on the cross when pierced by the sword of the Roman soldier flows then with the blood and water. The notes say that the blood signifies that indeed the Lamb has been sacrificed; the water symbolizes the Spirit and shows that there is a steady flow of grace from the sacrificed Christ. But there is more.

The blood was later interpreted by church fathers to represent the Eucharist; the water baptism. But listen to this: the Church is born from the wound in Christ’s side ‘like a second Eve from the side of another Adam.’ The notes then refer the reader to this passage in Paul’s letter to the Ephesians: ‘…and that is the way Christ treats the church, because it is his body—and we are its living parts. For this reason, a man must leave his father and mother and be joined to his wife, and the two will become one body. This mystery has many implications; but I am saying it applies to Christ and the Church.’ And the notes here are: ‘Paul makes this text a prophecy of the marriage of Christ and the Church: a mystery, like that of the salvation of pagans, that has been hidden is now revealed.’ This fascinates me because of something Tom Disch said to me about the third act of Wagner’s Parsifal (I have never actually seen the opera but he has). He said that when the spear is inserted into Amfortas’ wound (which heals the wound) it all looks very sexual because Amfortas lifts his robes, and the wound is in his thigh…of course it is, because Amfortas is the Fisher King of Celtic mythology, as I mentioned in my previous letter. A friend of mine who is Irish and into mythology explained to me last week that the Fisher King’s wound makes it impossible for him to impregnate the mountains by riding through a cleft between them, so here again is a distinct sexual theme. The wound in Jesus’ side, viewed this way, suggests what Eliade speaks of as a vagina dentata, ‘…or the dangerous descent into a cave or crevice assimilated to the mouth or the uterus of Mother Earth. All these adventures are in fact initiatory ordeals, after accomplishing which the victorious hero acquires a new mode of being.’ Christ’s wound, then, is more than an injury; it is the vagina from which the second Eve is born. Now, I happened to remember a remarkable passage in one of the finest reference books on Greek religion, Jane Harrison’s Prolegomena to the Study of Greek Religion, published in 1903. One of the many forms that Dioysos took was that of Dithyrambos, whose name, Harrison believed, meant ‘he who entered life by a double door.’ The first door was from the womb of his mother; the second was from the thigh of his father Zeus. ‘Dithrambos is the Babe mystically born,’ Harrison writes. ‘He of the miraculous birth…Dionysos’ resurrection and re-birth as a child.’

So the significance of the spear-wound in Christ’s side is complex; it is the cause of Jesus’ death, and yet it is this wound from which the Church is born ‘like a second Eve from the side of another Adam,’ and if we connect this with Eliade’s vagina dentata, what is born from this wound is divine—an idea confirmed by the myths concerning Dithrambos, the sub-form of Dionysos, and of course there is a tremendous number of links between Dionysos and Jesus Christ, which I don’t have to spell out. I’m sure you know them. I will add, though, that in mid-1974 during my supernatural experience, I had a great dream in which a huge open book was held up and on the page I could read the word Jesus. Then the word divided up and became two other words: Zeus and Zagreus.

Zagreus was yet another form of Dionysos, and Zeus, of course, was Zagreus’ father. So the dream revealed to me that he whom we worship as Jesus is actually a fusion of Zeus and his son Zagreus; more, the dream was telling me that the word ‘Jesus’ was in fact cypher for Zeus-Zagreus and was so read by early Christians; this is another example of the steganographic writing in the N.T.

The early [apostolic) Christians, that is, the Eleven, were worshippers of Dionysos. This fits in with John Allegro’s contention that originally Christianity was a mushroom cult, one of intoxication, and that the word ‘Jesus’ referred to the amanita muscaria. Thus the enthusiasmos by the Holy Spirit that the apostolic Christians experienced at the feast of agape was due to drinking a broth made from the detoxified amanita muscaria, as well as bread baked from it (mushroom bread is still made today; it really exists). This fits the contention in The Road to Eleusis ‘Unveiling the Secret of the Mysteries’ by Wasson, Ruck and Hofmann that the mysteries at Eleusis were based on the drinking of wine made from an ergot that contained LSD.

The wound, then, is a source of new life, miraculous and mystical life, and, as members of the Church, we somehow join Christ as the bride joins with her bridegroom, obviously in a hierogamy. And it is the psychological hierogamy, the unification of the opposites in the collective unconscious, that produces psychological wholeness, according to Jung; this is the Chemical Wedding of the Hermetic Alchemists. We, then, are born from the wound in Christ’s side, and, having been born from that wound, we enter in a hierogamy with the resurrected Christ, producing the divine syzygy that is the goal of both Chinese and European alchemy, in fact all alchemy and much of mythological initiatory rites. Enthusiasmos by the Holy Spirit is really the discorporate risen Christ entering the Communicant at the agape feast. The issue here is love, joy, intoxication, marriage, and the birth of the divine child. I experienced this. I felt its birthin my mind—in fact my brain. I had a name for it; I called him ‘Firebright.’ I knew myself to be female, in the spiritual sense, joining a suprahuman life form in interspecies symbiosis. Lest this sound totally crazy to you, allow me to quote from the Britannica’s article on Taosit alchemy:

‘Instead of externalizing vital energies, especially sexual energies, the Yin and Yang forces of the body are made to unite in a hierogamy (holy marriage) and to create the ‘elixir of life,’ the ‘golden flower,’ the ‘mysterious embryo,’ the ‘infant,’; i.e. the new immortal being that eventually leaves the mortal body through the occiput (the top of the skull) and ascends to heaven.’

This is the ‘born again’ or birth from above’ or most accurately ‘birth in the Spirit’ of Christianity. The wound in Christ’s side has made him female and he gives birth—to those who are ‘born again’ or ‘born in the spirit.’ He is, most likely, both father and mother, which is to say, Christ is complete; the first hierogamy occurred with him and he passes the secret along to his disciples who thereby became immortal; viz: when one of them dies, the ‘mysterious embryo’’ born of the union of the communicant and the Holy Spirit leaves the physical body and goes to another physical body at a future time; this superficially appears to be reincarnation, but it is not; what is immortal is not the person with the discorporate Christ; it travels from body to body over the centuries. When the new recipient is born he or she does not know that he or she contains this ‘elixir of life’; it becomes conscious when the proper disinhibiting signal is presented to it; this is the Christian fish sign. Whereupon the ‘mysterious embryo’ remembers, which is to say, anamnesis occurs. To repeat: the person is not immortal; a higher life form, the result of interspecies symbiosis, is immortal. For me this was Thomas in me, and, the hierogamy having again successfully taken place in me, causing the birth of Firebright, when I died, Firebright will go on to a future recipient, and he will carry a part of me with him, since he is a compound of me and the discorporate Christ (as Holy Spirit).

So that’s what Christianity was originally really about, and that is what my February 1974 anamnesis was really about, all that in 1974 that I wrote about in Valis. However, the wound in Christ’s side is damaged—i.e. not effective—because of the iron spear-tip of Rome still lodged in it; thus Christianity failed: it fell victim to the Empire. The Savior must be saved (as I mention in Valis and is spoken of in Parsifal, the ‘Salvator Salvandus’ of Gnosticism). We Christians must heal the injured Christ, we to whom he has given birth.

Well, it’s late; I’ve got to knock off. Isn’t this strange stuff? Blood, water, wound, spear-tip…it’s not what People magazine writes about; that’s for sure.” In fine condition. Accompanied by the original mailing envelope.

In the months of February and March 1974, Dick, then still convalescing and medicating himself from an impacted wisdom tooth, began to experience a series of hallucinations. Dick, who referred to them as ‘2-3-74’ in the shorthand, believed that his thoughts were being invaded ‘by a transcendentally rational mind’ of which he referred to as ‘Zebra,’ ‘God,’ or ‘VALIS.’ He documented these experiences in letters to Patricia Warrick. In an interview with Frank C. Bertrand in January 1980, Dick expounded upon his theological philosophy. These concepts formed the basis of his 1981 sci-fi novel VALIS.