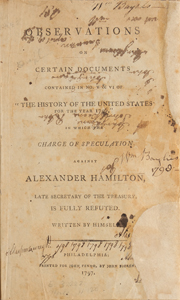 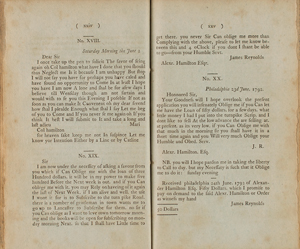 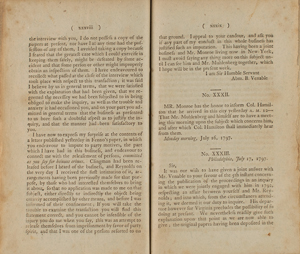 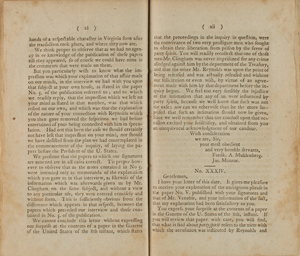 Rare book: Observations on Certain Documents Contained in No. V & VI of 'The History of the United States for the Year 1796,' in which the Charge of Speculation against Alexander Hamilton, Late Secretary of the Treasury, is Fully Refuted, Written by Himself. Philadelphia: Printed for John Bioren, by John Bioren, 1797 [but likely William Duane, 1800]. Rebound in modern calf with marbled boards, 5.25 x 8.25, 95 pages. In very good to fine condition, with staining, chipping, many ink notations, and professional restoration to paper loss to the title page; all other pages display scattered light foxing and staining.

Commonly known as the 'Reynolds Pamphlet,' this was Hamilton's response to scandalmonger journalist James T. Callender's exposé of the sexual relationship between Hamilton and a married woman, Maria Reynolds, as well as Hamilton's alleged financial corruption. In this response, Hamilton denied being a party to any improper financial matter but confessed to the relationship, while proving that he had been victim of blackmail by James Reynolds over his adultery.

Mrs. Hamilton tried to purchase all copies of the 1797 pamphlet, partially because of the blunt frankness of her husband's confession: "My real crime is an amorous connection with his [Reynolds'] wife for a considerable time, with his privity and connivance." Thus, the original printing is incredibly rare. In 1800, amidst of the Jefferson-Burr election, anti-Federalists such as William Duane reprinted Hamilton's admission of infidelity—the present copy would seem to be one of these later facsimiles, as it varies from the original of 1797 by having the correct numbering of Letters 18 and 20 on page xxiv-xxv; however, it also doesn't match exactly the 1800 edition, having a different typesetting on page xl.