Desperate for money in Tahiti, Gauguin authorizes the sale of his prized possessions: "Two small paintings of sunflowers by Van Gogh" 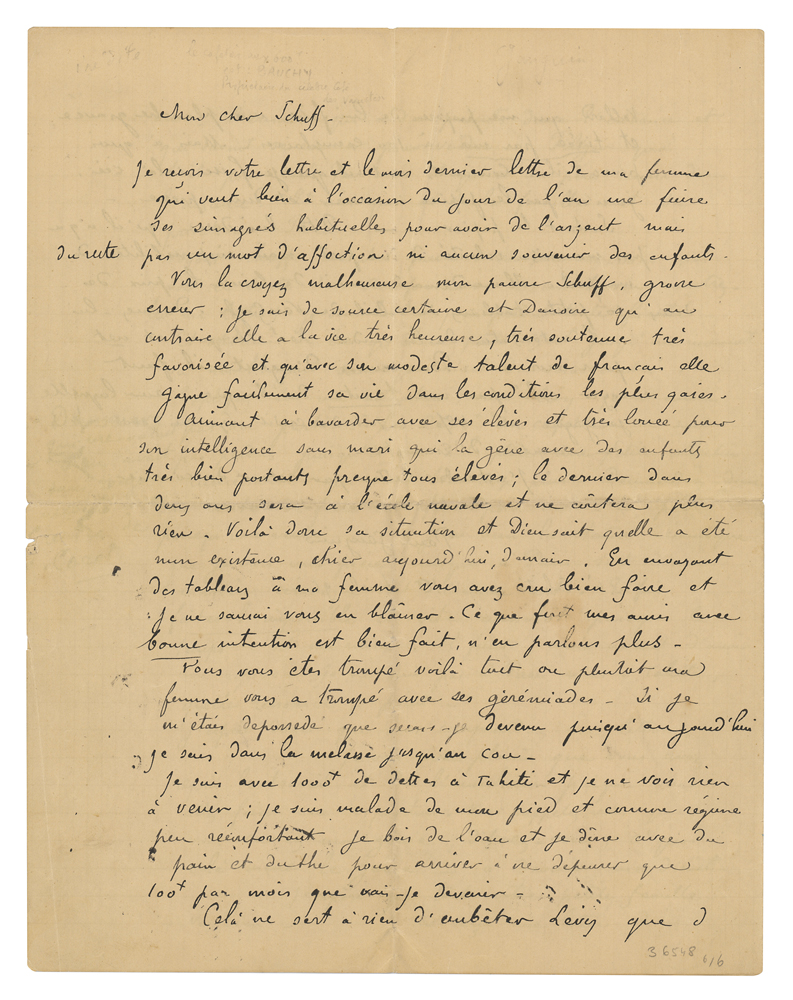 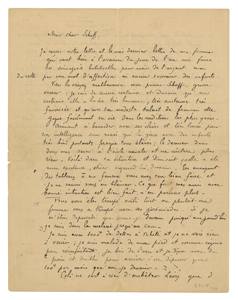 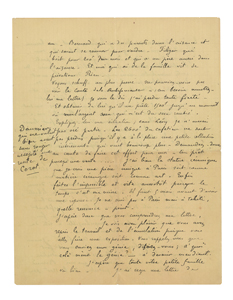 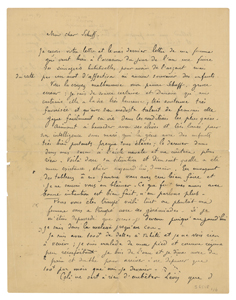 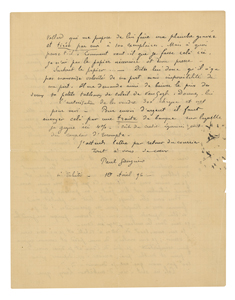 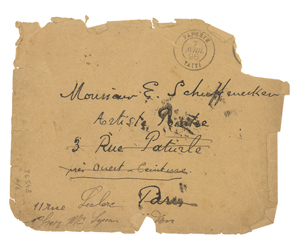 Desperate for money in Tahiti, Gauguin authorizes the sale of his prized possessions: "Two small paintings of sunflowers by Van Gogh"

ALS in French, two pages both sides, 8.25 x 10.5, April 10, 1896. Handwritten letter to painter, art teacher, and collector Emile Schuffenecker, written during Gauguin's second and final stay in Tahiti. The painter exposes the material difficulties which lead him to abdicate all pride, evoking the lack of recognition towards him. He asks for help from Schuffenecker, whom he had maintained a lasting friendship with since 1873. He talks about his wife Mette's "usual antics" to get money—while, according to him, she is not unhappy at all and makes an easy living in Copenhagen. She deceived Schuffenecker by asking him to send paintings, but Gauguin cannot blame his friend. As for him, he is "in the molasses up to my neck" while "in debt and penniless." He writes (translated): "At 50 soon I am on the ground without strength and without hope. To youth I somehow gave freedom for lack of teaching: by my boldness, everyone today dares to paint alongside nature and all in profit, sell next to me because once again everything appears now understandable next to me. Finally, let's not recriminate. Still, I have lost all pride. I was never protected because I was believed to be strong today I am weak I ask for protection."

He compares his situation to that of Emile Bernard and Charles Filiger, "young people less interesting than me…who benefit from protection and help from their family." Gauguin asks Schuffenecker to request a loan from the Earl of La Rochefoucauld: "Daumier, who was worth me, had without blushing accepted an annuity of Corot," recalling that he still has a small statue in Paris "that I believe unique piece in Paris either as a ceramic material or as an art. Finally do the impossible and quickly immediately because time is my ruin." He continues: "I have received a letter from Vollard who offered me to make him an engraved and drawn plate by me 100 copies. But what is he thinking. How does he want me to do this here, I do not have the necessary paper and a press. Especially the paper…Tell him then that there is not ill will on my part but impossibility on my part. He also asks me to lower the price of two small paintings of sunflowers by Van Gogh. Give him permission to sell them for 300f each and net for me." In fine condition, with short splits to ends of the intersecting folds. Accompanied by the original mailing envelope addressed in Gauguin's hand, which has several edge tears.

A painter, art teacher, and collector—most notably one of Van Gogh’s earliest collectors—Emile Schuffenecker was one of Gauguin’s closest friends, and an outspoken supporter of his artistic career. He was also responsible for proposing the important 1889 exhibition at the Volpini Gallery, which became a key moment in Gauguin’s career, expanding his influence on young painters. In late 1887 or early 1888, Gauguin traded his canvas 'On the Shore of the Lake, Martinique' to Vincent Van Gogh in exchange for two small paintings of sunflowers that the great Dutchman had completed the previous summer. Gauguin hung them above his bed when he lived in Paris on Rue Boulard with Emile Schuffenecker, and they remained there during his voyages in the South Seas. Desperate for money by 1896, Gauguin decided to finally part with these prized possessions; they were ultimately purchased by the art dealer Ambroise Vollard for 225 francs a piece. Today, one of the canvases resides in the collection of New York's Metropolitan Museum of Art. A rare and significant association piece connecting several important artistic figures of the Post-Impressionist movement.