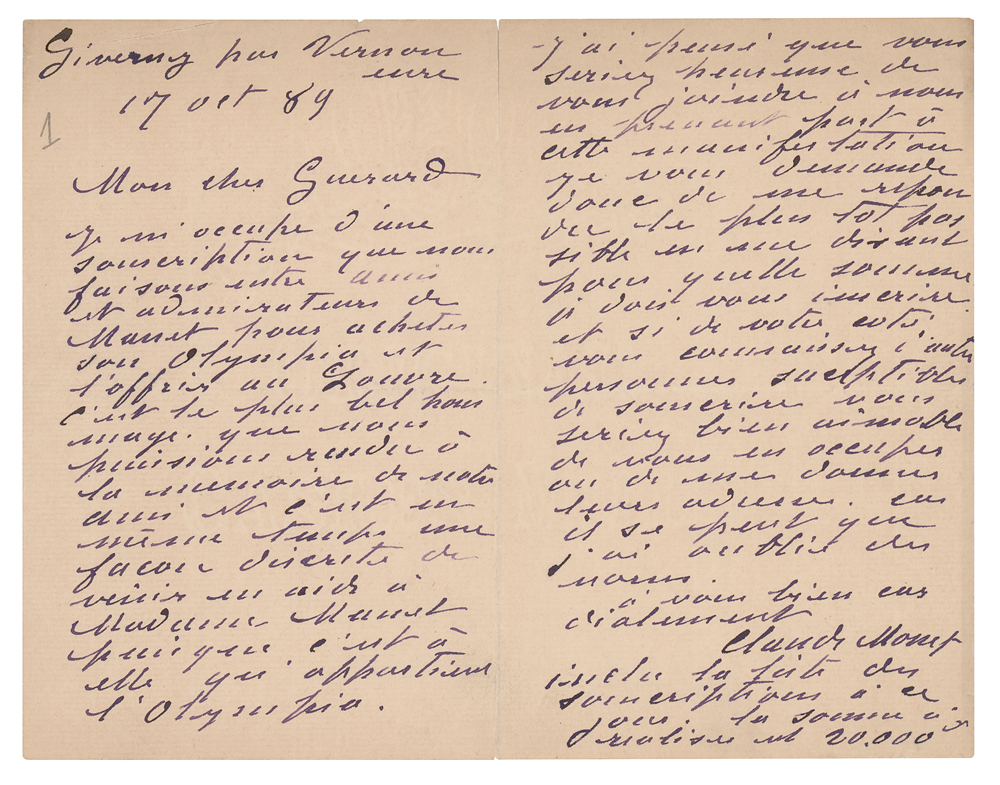 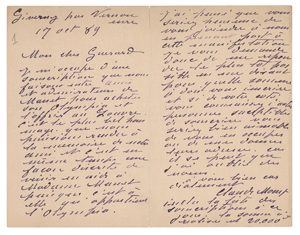 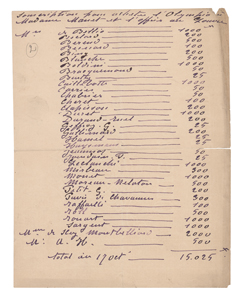 ALS in French, two pages on two adjoining sheets, 4.5 x 7, October 17, 1889. Important handwritten letter by Monet to fellow painter Henri-Charles Guerard, relating to Monet's campaign to buy Edouard Manet's 'Olympia' for the French National Museum—along with a handwritten list showing who had contributed so far, and the total raised. In part (translated): "I take care of a subscription that we make between friends and admirers of Manet to buy his Olympia and offer it to the Louvre. It is the most beautiful tribute that we can pay to the memory of our friend and it is at the same time a discreet way of helping Madame Manet since it is to her that the Olympia belongs." Includes a handwritten list by Monet, documenting the contributors thus far—with notable names like "Boldini," "Caillebotte," "Cheret," "Durand-Ruel," "Geffroy," "Galliard," "Huysmans," "Mirbeau," "Monet," "Sargent," "Rouart," and others—and the amount donated, which totaled 15,025 francs as of October 17th. In fine condition.

Edouard Manet’s painting 'Olympia,' an arrestingly bold nude of a reclining prostitute, immediately sparked controversy upon its unveiling at the 1865 Paris Salon. Later recognized as one of the artist’s true masterpieces, Monet spearheaded a public campaign to raise money for the French government to purchase the painting. Monet's letters on the subject—generally sent to those within his artistic circle—are highly coveted, and this example is dramatically enhanced by the list of subscribers. By February 1890, Monet had raised about 20,000 francs to purchase the great work and announced its donation to the French national museums. As the law prevented the Louvre from exhibiting works until their creators were ten years deceased (Manet died in 1883), 'Olympia' was first shown at the Musée du Luxembourg, then at the Musée de l'Art Contemporary of Paris. By order of Georges Clemenceau, Olympia finally took its place in the Louvre in 1907.