Flown flag of the state of Texas, carried to the moon during the historic Apollo 16 mission, with crew-signed insurance cover 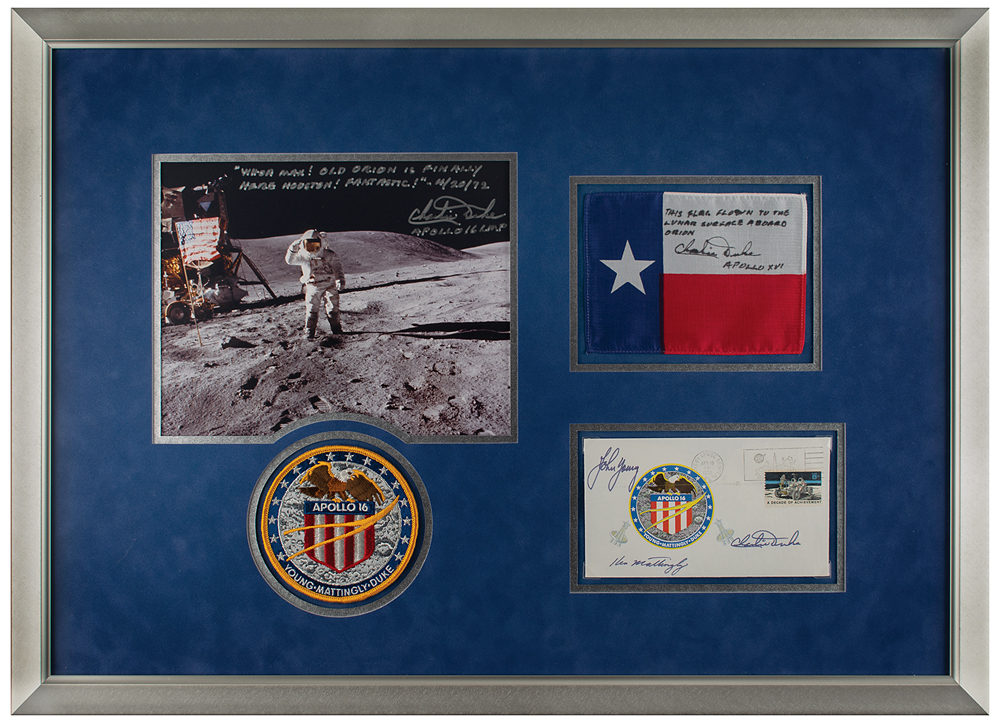 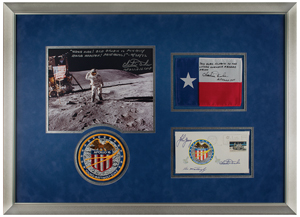 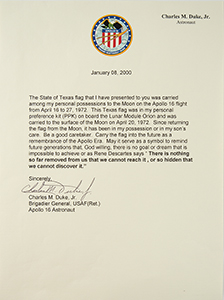 Flown flag of the state of Texas, carried to the moon during the historic Apollo 16 mission, with crew-signed insurance cover

Flown flag of the state of Texas, 5.75 x 4.25, carried to the moon aboard the Lunar Module Orion during the historic Apollo 16 mission, signed and flight-certified in black felt tip, “This flag flown to the lunar surface aboard Orion, Charlie Duke, Apollo XVI.” The flag is attractively mounted and double-matted alongside an Apollo 16 insurance cover, signed in black felt tip by Duke, John Young, and Ken Mattingly, and a color 9.25 x 7.25 photo of Duke saluting the American flag on the moon, signed in silver ink, “‘Whoa man! Old Orion is finally here Houston! Fantastic!’—4/20/72, Charlie Duke, Apollo 16 LMP.” The display is framed with an Apollo 16 mission patch to an overall size of 26 x 19. In overall fine condition.

Accompanied by a photo of Duke taken at the time of signing, the flag’s original presentation certificate that is signed in black felt tip by Duke, and a signed letter of authenticity from Duke, which states: “The State of Texas flag that I have presented to you was carried among my personal possessions to the Moon on the Apollo 16 flight from April 16 to 27, 1972. This Texas flag was in my personal preference kit (PPK) on board the Lunar Module Orion and was carried to the surface of the Moon on April 20, 1972.”